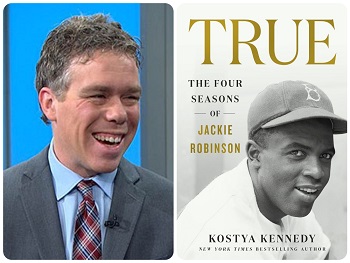 An editorial director at Dotdash Meredith and a former editor and senior writer at Sports Illustrated, Kostya Kennedy is also the bestselling author of several books, including 56: Joe DiMaggio and the Last Magic Number in Sports and Lasting Impact: One Team, One Season. What Happens When Our Sons Play Football. Says John Grisham of Kennedy’s latest work, True: The Four Seasons of Jackie Robinson, “[It] is a captivating reminder of…Robinson’s greatness not only as a baseball player and trailblazer, but also as a fearless activist for the equal rights and fair treatment of all people. Reading it, I said to myself time and again: ‘I wish I could have met him.’”

Authors on Audio: A Conversation with Jeremy Scott

Authors on Audio: A Conversation with Michael Imperioli