Authors on Audio: A Conversation with Harold Holzer 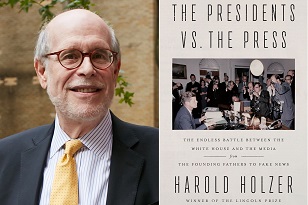 An award-winning historian and leading expert on Abraham Lincoln and Civil War-era politics, Harold Holzer is also the author of several books, including 2014’s Lincoln and the Power of the Press: The War for Public Opinion. In his new book, The Presidents vs. the Press: The Endless Battle between the White House and the Media — from the Founding Fathers to Fake News, he widens his lens to explore how commanders-in-chief from Washington to Trump have dealt (or not dealt) with journalists.

Holzer recently discussed his latest work with author/attorney Talmage Boston. Listen to the podcast here. (And read Boston’s thoughts on The Presidents vs. The Press here.)