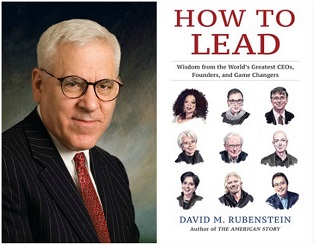 A co-founder of the Washington, DC-based Carlyle Group and a longtime philanthropist, David M. Rubenstein is also an accomplished writer. His most recent book is How to Lead: Wisdom from the World’s Greatest CEOs, Founders, and Game Changers, in which, says former U.N. ambassador and national security advisor Susan E. Rice, the author “deftly distills the key qualities of effective leadership while treating the reader to a feast of his inimitable interviews with many of our nation’s most accomplished leaders.”

Rubenstein recently spoke with author/attorney Talmage Boston. Listen to the podcast here. (And read the Independent’s review of How to Lead here.)

Stephen Usery speaks with the author of the recent collection of essays Pulphead, one of the notable books of the year by the New York Times.