Authors on Audio: A Conversation with Clay Risen 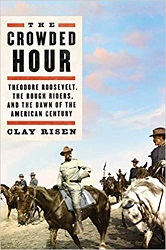 The author of The Bill of the Century: The Epic Battle for the Civil Rights Act and A Nation on Fire: America in the Wake of the King Assassination, among other books, New York Times deputy op-ed editor Clay Risen turns his pen toward American history in his new work, The Crowded Hour: Theodore Roosevelt, the Rough Riders, and the Dawn of the American Century. Risen spoke recently with author/attorney Talmage Boston about his latest release.

Listen to the podcast here. (And click here to read the Independent’s review of The Crowded Hour.)