Remembering Tony Mendez, who passed away recently at 78. 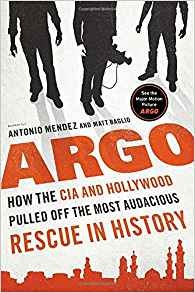 Tony Mendez, the real-life spy portrayed in the 2012 blockbuster film “Argo,” was the author of four books. But to describe him primarily as “an author” would be misleading.

Mostly, he was, as the title of his first book, published in 1999, says, The Master of Disguise, a secret agent who could pass for any man or everyman, the next-door neighbor or an unremarkable person going unnoticed on the street.

But what was unremarkable about Mendez, who died Jan. 19th at the age of 78 after a long struggle with Parkinson’s disease, also made him remarkable. He was an extraordinarily humble, gracious, and kind man. He was also a very talented artist who wrote with his brush perhaps more than with his words. One of the perks of being a journalist is getting to meet people like him.

Profiling Mendez for Maryland Life magazine, I observed these traits in person during a June 2012 visit with Mendez, his wife, Jonna (like Tony, retired from the CIA), and daughter Jesse, then 19, at their mountain home in the Pleasant Valley in Washington County, Maryland.

But rather than a formal interview, it felt — even though we’d never met before — more like spending a few hours with old friends, including a casual lunch on their screened-in porch.

“I’ve been described as soft-spoken,” he told me. At 185 pounds and 5-feet-7, he allowed as how he had “shrunk a couple of inches.” Spooks, he said, “come in all shapes and sizes. If you are role playing, you use what you got.”

Tony invited me to sit in his “Argo” director’s chair. “I sat in it while I was watching them shoot film in Los Angeles,” he said. Tony, Jonna, their children, and grandchildren were all extras in the film, and Tony and Jonna would, of course, get the red-carpet treatment at its world premiere, which seemed totally out of character for the man who preferred anonymity.

In the movie, Ben Affleck portrays Tony as the spymaster who planned and executed the “exfiltration” of six Americans from the Tehran homes of two Canadian diplomats in January 1980 — while Iranian revolutionaries held 52 other Americans hostages in the U.S. embassy for 444 days, until Jan. 20, 1981.

“Argo” would win three Academy Awards, including for Best Picture. The film title is what they called the operation, as in “R-go f-yourself,” commonly uttered in his CIA workshop, Tony said.

The piece I wrote then was pegged to the release of the book Argo: How the CIA and Hollywood Pulled Off the Most Audacious Rescue in History — I had an advance reader’s copy — and the film, so my notepad was flush with unused material. There was in his home, I noted, what he called “the shrine,” an upstairs wall of inscribed photographs with presidents and citations; he seemed most proud of the Trailblazer Award the agency had given him.

Tony had come to government service and the CIA as an artist and, at 71, he was still at it, creating beautiful oil landscapes of mostly Maryland scenes: Burnside Bridge over Antietam Creek; the Potomac River by the C&O Canal’s Seven Locks; two rowboats at Fletcher’s Boat House in the District of Columbia — which an investor later bought for $4,000; cherry blossoms by the Tidal Basin, with a young woman on a bicycle who happened to be Jesse.

In fact, his secluded mountain compound on 38 wooded acres a mile from pavement had become a veritable artist colony for himself, his better-known sculptor son, Toby, and Jonna, the photographer in the family. He proudly showed it all to me, including his gallery in a separate structure — it began as an uncovered 60-foot deck — and it was clear that his life remained full and fulfilling.

But there was that damned Parkinson’s. He graciously signed the paperback ARC I’d brought with me — “BEST TO GENE! Enjoy!” — in handwriting that was shaky but legible. But his scrawled signature wasn’t. I read that he spent his last days in hospice care in Frederick, Maryland, where his son lives. I’m sure that losing the ability to create with his hands was the cruelest hand he’d ever been dealt.

Among his final projects was his fourth book, written with Jonna and co-author Matt Baglio. The Moscow Rules: The Secret CIA Tactics that Helped America Win the Cold War is to be published posthumously on May 21st. Even months before its release, Amazon ranks it number one in “History of Russia and Former Soviet Republics.”

Given our current challenges with the emboldened successor to the former Soviet Union, I wish that Tony Mendez were still around to work his spymaster’s magic, or at least to advise us on how to deal with such an adversary, clandestinely or otherwise. We could probably use his help.

A new regional anthology seeks to answer that question!