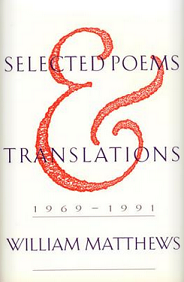 For National Poetry Month, my university always hosts an event where poets read aloud their favorite poem by another poet, living or dead. While I have many “favorite” poets — from Tim Seibles to Derek Walcott to Harryette Mullen — the poem I always want to read is one called “Another Beer” by William Matthews.

The work of Matthews was introduced to me in grad school by classmate and close friend Evan Lesavoy, who, to this day, is the only white poet my age to recommend to me Black poets whom I’ve not already read.

In the past, Evan introduced me to Hurdy-Gurdy by Tim Seibles, a poet who would become a mentor and friend. We marveled at a poem called “The Good City,” in which Seibles is so passionately in love with a woman, he says his head is growing a second head to hold all the things he did not say to her.

That kind of wry humor was also present when Evan read to me a different author’s poem called “The Search Party” in the pit of some forgettable winter.

Matthews was, of course, as white as that winter but is by no means forgettable. A sense of self-awareness permeates many of his poems. In “The Search Party,” at several instances, the poet addresses the reader directly, and somewhat dramatically at the end, asking for an admission of culpability. The poem’s content consists of a search for a missing girl in the woods, where the whole community has come together to try and find the child before the unthinkable happens.

And Matthews, amidst his lyrical narration, turns to assure the reader that there was, in reality, an actual girl, a physical search, a non-metaphorical woods. He makes full range of what is now a well-worn postmodern irony insomuch that his insistence he isn’t making this all up for the sake of the poem makes the reader questions even further how much of this is real.

But, in the end, most readers, myself included, will find themselves ready to accept as presented his “facts” because his wry wit and sharp attention is so pleasurable. If it’s all a con, it’s one where you don’t mind being fooled:

“Reader, by know you must be sure / you know just where we are, / deep in symbolic woods. / Irony, self-accusation, / someone else’s suffering. / The search is that of art // You’re wrong…”

For as I much as I enjoy the aesthetic hopscotch Matthews sets up in “The Search Party” — his direct address thrown like a stone we make sure to take notice of as we leap over it — I think he’s at his best in a different poem, one I mentioned at the beginning, “Another Beer.” At its heart, the poem is a catalog, a lining up of the shots, but each item attends to the business of lyrical transformation with such playfulness and poignancy, the reader is easily swept along in its imagination. The poem begins:

Ha. What cheek! And what a sly way to enact the clockiness of the clock, or as Gerard Manley Hopkins would say, to get at the inscape, Hopkins’ term for the essential quality of an object. The poem continues in the third stanza:

The motif of song as being part of that inscape of the beer persists all the way through the poem, and in the dead middle, we get an expanded description of silence through that aforementioned Matthews-style wry humor:

“Then a beer for the juke box. / I wish it had the recording / of a Marcel Marceau mime performance: / 28 minutes of silence / 2 of applause.”

It takes a certain kind of imagination to frame silence as an applauded experience to be sought — all the John Cage fans notwithstanding — particularly in a medium like poetry, which seems to mold itself against that same silence. In that tension, Matthews finds so much room to invite the reader into his play. Come get a little sand in your shoe, he seems to suggest. Or, as he writes:

“And a beer for anyone / who can’t tell the difference between / death and a good cry / with its one song. / None of us will rest enough.”