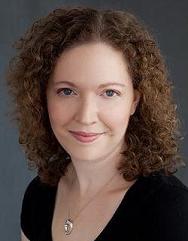 In Stephanie Feldman’s debut novel, The Angel of Losses, protagonist Marjorie Burke is working to complete her doctoral degree when her life is turned topsy-turvy by the death of her grandfather and the discovery of his notebooks. These notebooks contain special stories that undermine everything Marjorie knows about her family’s history. The stories lead her on a quest through folklore, historical accounts, dreams, and a faith she never fully believes in to uncover the truth about her family and herself.

This story seems difficult to categorize. When people ask you what your novel is about, what do you say?

I describe the book as a story about a family that also has a fabulist element (the story and the family, I guess). I didn’t think about genre as I wrote. I love stories that are realistic psychologically, but otherwise unconstrained, and it’s a great time to be a reader of genre-bending fiction.

A large part of the novel explores the relationship between Marjorie and Holly, two sisters who were very close growing up, but who, as adults, have grown apart. Is it inevitable that two individuals will take different paths to adulthood and naturally drift apart? In this specific case, is the primary reason the fact that Holly takes on a religion that Marjorie does not at first understand? Or would they still have drifted apart even without Holly’s conversion?

I don’t know if it’s inevitable, but it’s certainly not unusual for family members to find it difficult (if not impossible) to understand one another. As for Holly and Marjorie, I think Marjorie’s bewilderment at Holly’s choice of a husband is as responsible for the sisters’ rift as Holly’s embrace of religion. Marriage and religion — two life-changing choices that are so personal, so difficult to explain, and so provocative.

Would Marjorie and Holly have drifted apart anyway? I don’t think they would drift thoughtlessly — their bond is too strong for that — but I can see other conflicts emerging. Both sisters are stubborn, and that trait is the family’s ticking time bomb.

Marjorie does not know the role that Judaism will play in her family and in her future when she chooses the Wandering Jew as a topic for her dissertation. She is just drawn to the story. Is this the work of fate? God? Or, did she unconsciously absorb this through the bedtime stories her grandfather told her during her childhood?

The absurdity, of course, is that, despite its name, the legend of the Wandering Jew is Christian in origin. I almost (almost) feel bad for Marjorie — she feels like the universe is playing a joke on her when Nathan, a Wandering Jew in his own right, becomes her brother-in-law and disrupts her family life.

For Marjorie, it all begins with her grandfather Eli’s bedtime stories, which are built on a specific (if secret) tradition, but also invoke themes — exile, loss, hubris — that transcend culture. Yes, it’s fate, if family and love and history can create a kind of fate.

Several of the characters in the book struggle against what they are destined to do. Do you believe we can plot our own course, or are our paths predetermined?

I don’t believe in fate in a cosmic sense, but I do believe that outrunning our pasts and liberating ourselves from our own characters can be difficult, if not impossible. And sometimes, escaping those fates is inadvisable, even unethical. Marjorie could choose a different ending for herself, but she’s unwilling to make the sacrifices that choice requires.

Some of Marjorie’s experiences raised goose pimples on my arms and made me glad I was reading in the middle of the day, versus in my bed at night. She is a bit shaken from time to time, but doesn’t seem overly scared. Do you see her as unusually brave? If it were me, I would have probably run to the police when strangers kept showing up or I heard voices in the night. But, she doesn’t. Why not?

Yes, she is brave. Part of her journey is admitting the things that frighten her, but she does live fearlessly, for better or worse, and I loved writing a character like that.

Some of that bravery is really arrogance in disguise. She doesn’t think she needs help. Some of it is rooted in jealousy. Her experiences are another kind of relationship with her late grandfather, Eli, and she doesn’t want to share them or him with anyone else.

Another part of her is afraid if she shares her story, she’ll sound crazy. (She’s particularly worried about what Simon, her on-again-off-again boyfriend, would think.)

I was struck by how even in close-knit families, such as the one in the book, it is possible that people never really know each other. Why do you think people keep secrets from those they love? I think the excuse is often to avoid hurting loved ones. But in the end, when the truth is eventually discovered, isn’t it often more hurtful to realize those you thought you knew were keeping secrets?

I agree with you. Marjorie’s grandfather, Eli, kept secrets to spare his family, and at the end of his life found it was all in vain. Eli’s fairy-tale hero, the White Rebbe, has a similar thought when he discovers his own family legacy: If only his father had told him the truth, he would have been prepared to take on the challenges coming his way.

I also think that if Marjorie and Holly had been able to speak openly — if Holly could have communicated the value she found in her new life, if Marjorie could have kindly expressed her concerns, and if each could have listened to the other — they would never have become estranged in the first place. Or, at least, their relationship would be a lot better than it is at the beginning of the novel. They kept these thoughts secret for different reasons: hurt, self-pity, and a desire to be right.

Dreams play an important part in the story. Do you believe dreams can bring important messages/lessons? Have you ever had a dream like that?

I’ve never had a dream like Marjorie’s — one that communicated a vital and certain message — but I think it’s possible. Marjorie finds the Talmudic quote: “A dream un-interpreted is like a letter unread.” If not a letter from God or the universe, I suppose a dream can be a letter from the unconscious self. In The Angel of Losses, the dreams served as an “in-between” state, a glimpse of the new world Marjorie must come to understand.

Without giving way any spoilers, can you tell those of us who have read the novel if you think there is a future for Marjorie and Simon?

I do! I like to imagine that Marjorie gets a tenure-track position at some rural college or university and they move into an old farmhouse or something. But, of course, there’s more in store for Marjorie, so it’s not an easy country life waiting for them. It’s funny, I always envisioned this story as complete, but now that readers have begun asking what comes next, I find that I’m curious, too. And the readers who do ask always ask about Marjorie and Simon.

[Click here to read the Independent’s recent review of The Angel of Losses.]

Mandy Huckins holds a Master of Arts in English degree from the University of Charleston in South Carolina. She lives in the Washington, DC, area with her husband, an Air Force officer. When not reading, Mandy works for the Combined Federal Campaign-Overseas, which provides uniformed service members and Department of Defense civilians serving overseas the opportunity to make charitable contributions to one or more of over 2,500 different organizations.