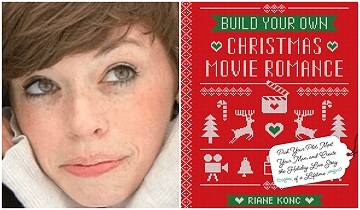 Riane Konc has written satire for the New Yorker, New York Times, McSweeney’s Internet Tendency, Electric Lit, Mad Magazine, and countless other publications. From pop-culture hot takes to parenting advice, from “Emily Dickinson’s Patreon” to “FBI Secrets That James Comey Knows,” no topic is off limits. Her new book, Build Your Own Christmas Movie Romance, comes out this month from Ulysses Press, and it’s a hysterical parody of both Hallmark movies and Choose Your Own Adventure books.

Build Your Own Christmas Movie Romance comes out this month! Congratulations! First and foremost, I have to admit — I have never actually watched more than 15 minutes of a Hallmark movie. But I laughed the entire way through this book! What makes this type of humor so accessible to readers, regardless of their pop-culture knowledge?

Thank you! And I’m glad you said that: While this book is obviously written with people who, regardless of their opinions on them, have watched these types of movies, I wanted it to be a book that anyone could find funny — even if, like you said, you’ve never watched more than 15 minutes of a Hallmark Christmas movie. I think that one reason that it’s accessible for a larger audience is that made-for-TV Christmas movies are sort of a sub-genre of the broader romantic comedy genre. So, while there are a lot of differences between the two, a lot of the tropes — especially the romantic ones — are basically familiar to anyone who has ever seen any rom-com.

I also tried to balance out what made the book funny: There are a lot of pop-culture jokes and a lot of genre jokes, obviously, but I also tried to write a lot of self-contained jokes that don’t require any references to get. Essentially, I wanted to write as joke-heavy a book as I could, and I wanted those jokes to be coming from a lot of different angles, so that anyone could open it and find something funny.

I rabidly read Choose Your Own Adventure books as a kid. What made you pick that format for this book?

I should say, for clarity’s sake, and also so we don’t get sued, that while this uses a format similar to a Choose Your Own Adventure book, it is VERY MUCH not an official Choose Your Own Adventure book. But I think utilizing a “choice” format works well for a parody like this for two reasons. First, it kind of underscores how predictable these plot structures are, and how — while your heroine, for example, may ostensibly be presented with the “choice” between the bad business boyfriend from the city and the kind single dad from the small town — it’s actually no choice at all. The audience knows what’s going to happen.

The other benefit of weaving “choices” and little side plots throughout was that it helped me cram in references to as many types of holiday movies as I could. This book, for example, doesn’t use the really common trope of “someone in this small town is secretly royalty, and they’re finding out at Christmas!” as the primary plotline, but it shows up briefly in some of the choices.

Humor is a tough sell in the freelancing world, especially satire, but you’ve cracked the code. How long did it take you to develop your voice as a humor writer? Where did you begin?

I’ve been writing (or trying to write) humor since I was a kid, but I didn’t start trying to write humor in earnest — or with any kind of focused consistency — for publications until about 2013. Before then, I would occasionally write a one-off humor piece and send it somewhere, but it would inevitably get rejected, and I would take this as a sign that I should never write anything again. Then I’d wait, like, a year, and do the whole thing again. I had to get into the practice of regularly writing and submitting and getting rejected (and then submitting elsewhere), and then doing the whole process over and over again, to start actually getting published. Once I was writing all the time, and figuring out what worked and what didn’t, I think I started finding some kind of consistent voice. I still get rejected all the time! But it only mostly ruins my life now, as opposed to years ago, when it entirely ruined my life.

What writers have influenced your writing?

My eighth-grade self was probably spiritually more like a 40-year-old man, which is to say that Dave Barry and Jack Handey were the first humor writers I was absolutely obsessed with. I still think Jack Handey is the absolute perfect, ideal writer of jokes. I have an impossibly long list of humor writers I love to read, but some of the writers whose pieces I go to specifically to help me get in a good writing-brain place are Jack Handey, Simon Rich, Alexandra Petri, Megan Amram, Anna Drezen, Daniel Ortberg, Jen Spyra, and Kelly Conaboy.

What is the difference between satire and other types of humor?

I think satire needs a target — or at least a clear point of view. Generally, satire is trying to influence the reader in some way, whereas other types of humor — done well — can still exist without any real point of view. Alexandra Petri, who writes a regular column for the Washington Post, is an example of a brilliant satirist — she’s taking things that are happening in real life and in the news and skewering them, whereas, for example, Jack Handey’s jokes all exist in some alternate magical universe and are not making a point about anything except for the crazy things you can do with language. They’re two writers who are doing totally different things, and I think they’re both geniuses.

What one piece of satire would you recommend to someone who doesn’t really understand what satire is?

This is an impossible question! I reject its limitations and will instead pick two of my favorites. One is an example of satire that skews really serious, and one is a piece of satire that skews super silly. Very serious satire: “Some Interpersonal Verbs, Conjugated by Gender” by Alexandra Petri. Very silly satire: “Jared Kushner’s Harvard Admissions Essay” by Megan Amram.

This past summer’s “To: Baby manufacturer Subject: Missing parts—important!!!” in Parents magazine was a huge viral hit. I saw it in no fewer than 11 mom groups on Facebook alone. Did becoming a parent impact your writing in terms of subject matter? Or was it just more material to source? (I have three kids, and they give me constant material to source…)

It definitely gave me more material to work with, but honestly, the biggest impact becoming a parent had on my writing was that it just made me write more. I think I got more existentially desperate. Either way, losing all of my free time was the best thing that ever happened to me as a writer. But while I definitely didn’t pivot into a writer who primarily focuses on parenting or kid humor, it’s still nice to have that well to dip in if I want to.

Do you ever write essays or stories that…aren’t funny?

I do! Pretty rarely, but I do. Most recently, about some of my feelings about God and Fleabag. When I was in college, and taking myself extremely seriously because I was in college, I only wanted to write really serious essays. But as it turns out, I’m just better and more efficient at writing jokes. But while I don’t write it in often, I can’t quit the Serious Essay genre entirely. I like this piece that I wrote for the McSweeney’s essay series, One Small Blow Against Encroaching Totalitarianism, and this very old piece, which I wrote for River Teeth’s flash nonfiction series, Beautiful Things.

An Interview with Ellen Crosby

A murder-mystery sends a Washington photojournalist on a quest for a killer — and the Independent for a conversation with its author.