An Interview with Monica Hesse

The Washington Post reporter and YA novelist talks about her latest book, the WWII-era Girl in the Blue Coat. 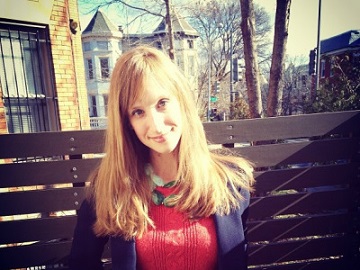 Your earlier YA novels, Stray and Burn, are sci-fi, while Girl in the Blue Coat is historical fiction. What compelled you to make such a big leap genre-wise?

It’s a big leap, but it’s also a total un-leap. I’m a journalist by trade, so research is my comfort zone. It was reassuring to work on a book where, when I wasn’t sure what should happen to my fictional characters, I got to go and find out what did happen in real life. And when I thought, “Well, this chapter would be much easier to resolve if I knew whether color film existed in World War II Europe,” it felt natural to put on my reporter costume and call around until I could find an obscure vintage film expert who could say, “But, of course. You want Kodachrome or Agfacolor, or maybe Agfachrome, but first let’s have a detailed conversation about the specific dates of your book’s events and who your characters are, because that would impact which camera film they’ve be most likely to get.”

Note: I do not want people to now fear that the book is an encyclopedia of film-developing techniques. It’s just that having conversations like this made me feel like historical fiction was the genre I should have been working in all along.

You’ve spoken before about your love of The Diary of Anne Frank. Which, if any, parts of protagonist Hanneke’s character did you draw from the real-life Anne?

Oh, none. The Diary of Anne Frank is what made me interested in the city of Amsterdam in 1943. But most of what I knew about the city was from the perspective of someone inside looking out. I wanted to learn what the German occupation looked like from the perspective of someone already on the outside — in more ways than one. Hanneke is bicycling through the cobblestoned streets every day, exploring the corners of her city in search of black-market goods. But she’s also a literal outsider; like a lot of citizens at the time, she doesn’t understand the full extent of what’s happening to the Jewish neighbors who are disappearing around her.

The only way in which the real-life Anne was helpful to me in terms of character development was the fact that, as you can tell from her writing and see through her personal artifacts, she was effervescent and vivacious, and she loved popular culture. Her room in the secret annex is covered with postcards of famous movie stars. Her diary entries are full of spats with her mother. Even while she’s in hiding, she’s thinking about normal teenage things. And I wanted that to come through in my main character — that war doesn’t stop people from being regular people.

Hanneke is truly three-dimensional; her actions, though done in opposition to the Nazis, aren’t always altruistic. Was there a risk in making the “good guy” flawed and occasionally self-serving when the bad guys, by any measure, are monsters?

I hope not — in fact, I think the risk would have been to go the other way, and to have a protagonist who was 100-percent pure and good. Because, at that point, we’re not talking about a person, we’re talking about a saint.

It’s really easy, in retrospect, for all of us to look back and say that we would have fought for the resistance, we would have fought against the Nazis. But, in fact, the percentage of resistance volunteers was really small. People were killed for it. People lost their entire families. Toward the end of the occupation, the whole country was starving, living on potatoes and boiled tulip bulbs. As a person living in 2016, I can fault Hanneke for not wanting to get involved right away. But fearing for her safety, and wanting to look out only for her hungry family — I think those were real calculations that real people thought about all the time.

World War II is an endlessly mined, endlessly rich period in history. What made you, a young woman in 21st-century America, want to conjure your own fictionalized piece of 1940s Europe?

You know, I got an email the other day from an older gentleman. He now lives in the United States, but he was born in the Netherlands. In 1943, the year my book is set, he was 6 years old, and his family was taken from their homes in a Nazi round-up. They were transported to the Dutch transit camp Westerbork, and then transported to Bergen-Belsen, where both of his parents died. After the war, he was adopted by an American family and moved overseas. And he was writing to tell me that, because he was so young when the round-up happened, he didn’t really have any memories of his home city. He didn’t really know what the occupation felt like, and after reading Girl in the Blue Coat, he felt like he had a better understanding.

So that’s my reply for why we should keep telling stories about a period of time that seems like it’s already been covered and re-covered in a million different ways. There’s always a new corner to be uncovered, and you never know when a story is going to mean something more to someone than you even anticipated.

Besides Anne Frank’s, what books — novels or nonfiction — would you recommend to someone wanting to gain a deeper understanding of WWII?

For fiction, you can’t go wrong with the works of Elizabeth Wein or Ruta Sepetys. For nonfiction, I’m partial to some of the memoirs that I read during my research. Two that come to mind are The Heart Has Reasons, which is a compendium of recollections of the young people who formed the Amsterdam Student Group. That group and its affiliates rescued and hid hundreds of Jewish children during the war. And Diet Eman’s Things We Couldn’t Say, the story of a young woman who joined the Dutch resistance with her boyfriend, is just completely heartbreaking by the end.

Which writers working today do you love (but secretly hate) because they’re so good?

Margaret Atwood is my all-time favorite (I know, whose isn’t?). Tana French and Sophie Hannah are the two writers whose works I’ll pre-order and salivate over on release day — I’m a total, total sucker for psychological thrillers. And the book I just finished this morning — The Haters by Jesse Andrews, another young-adult novelist — had dialogue that was so hilarious, I’m still giggling to myself about it, and I know I’m going to be re-reading it for writerly tips.

I just turned into my editor (let the joyful dancing commence) a draft of a true-crime novel about a series of arsons that took place in 2013 in a rural Virginia county. Over five months, more than 80 buildings were burned down. When they caught the arsonists, it was an engaged couple who had done it all — according to the man — for love. After that, it’s back to World War II for me. I have another book under contract that will also be set in 1943, but in a totally different country and with different characters.

And, see, I didn’t mind answering that question at all right now because I could talk about one thing I’ve just finished, and another thing I haven’t even started. Where that question starts to be horrible is when you’re right in the middle of a project, because then you inevitably feel like you’re writing the worst book in the history of the world.

Holly Smith is managing editor of the Washington Independent Review of Books and can’t get enough of stories about World War II.

Q&A with Rachel Machacek, author of The Science of Single

It was impossible not to do something about “love” in February. February is the month of romance, isn't it?