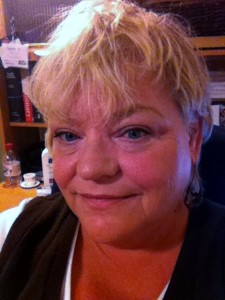 Lynn Chandler Willis’ novel Wink of an Eye won for her the Best First Private Eye Novel Competition, held by Minotaur Books and the Private Eye Writers of America. She is the first woman to win the competition in more than 10 years. While Wink of an Eye is her first “private eye” novel, it’s not her first mystery: The Rising won the 2013 Grace Award for Excellence in Faith-based Fiction in the mystery/romantic suspense/thriller category.

Wink of an Eye is about private eye Gypsy Moran, who has returned to his hometown of Wink, Texas. Wink is a real town in West Texas, with a population of less than 1,000. In the novel’s acknowledgements, you thank the people of Wink for welcoming you. Did they know your book would feature a corrupt sheriff, a couple of crooked deputies, and a ring of criminals kidnapping teenage girls? Can you tell us what their reaction was, or what you think it might be?

I discovered the Wink, Texas, Facebook page long after the book was written. I introduced myself and asked to join and told them about the book. We had some great conversations about what it was like to grow up in Wink. I'm from a very small town myself, so I understand completely the good and the bad. Most often, the good wins out. In Wink of an Eye, although he's been gone 20 years, when Gypsy's in trouble and his life is in danger, the first place he runs to is home —Wink, Texas. And in Gypsy's case, like many others, "home" is so much more than just a location. It's a living, breathing emotion. There are bad people, police corruption, and criminals doing horrible things everywhere — but the number of good people far outweighs the bad, and in Gypsy's mind, in his own hometown, those are the people worth saving and, possibly, dying for.

You have worked in the corporate world, the TV news business, and in the newspaper industry. Was creating fiction a very different process for you from the writing you did in those occupations, or did you find the transition fairly easy?

The biggest challenge in trying to juggle nonfiction and fiction was keeping the words "apparently" and "according to" out of my fiction! There isn't a lot of room for creativity in the news business, so it was often hard to not let the day job stifle the words I wanted to use in my fiction.

On your website, you write that you often play a “what if” game, following small-scale, unusual occurrences through possible complications. What sort of “what if” games did you play in creating Gypsy and this novel?

The Moran women, Gypsy’s sister, mother, and grandmother, are wonderful characters; two of them are very competent in their careers, but all are casual housekeepers and truly terrible cooks. What inspired their creation?

There wasn't one person in general, but rather the whole idea of gender roles that inspired those characters. I was a single mom to a son and daughter throughout their childhood, with the occasional rare visit from their dad. I had to be Mom and Dad more often than not, so there were no "gender specific chores" in our home. I taught my son how to do his own laundry when he was 10. My daughter helped me put a desk together with a screwdriver and wrench. Those memories and images played a part of shaping and developing the three Moran women. And it's kind of ironic that the true top cook in Wink of an Eye is a 12-year-old boy.

While the central plot is resolved in Wink of an Eye, there are enough significant loose ends to indicate a possible sequel. Is a sequel in the works? If not, what are you working on now?

Ahhh! You noticed there were a few loose ends? Yes, I'm in the process of outlining and researching another Gypsy adventure. Some of the loose ends will be tied up.

You live within walking distance of your nine grandchildren, and you’re involved in their lives and in their care. How do you manage to keep a writing schedule?

I have a laptop that goes almost everywhere with me, and I keep my WIP open at all times. I grab a sentence or two, maybe a paragraph, when I can grab them. I use to be a "panster" writer, writing by the seat of my pants, but I've since become an avid "outliner." With an outline, I know what comes next, so it makes it easier to grab that sentence while I'm waiting for the SpaghettiOs to heat up in the microwave.

Susan Storer Clark is a frequent contributor to the Washington Independent Review of Books. She is a former radio and television journalist and, since retiring from the federal government, has completed her first novel, and is at work on her second. She and her husband, Rich, recently moved to the Seattle area, where they are remodeling an old farmhouse, and where she is finally learning to play the guitar properly.

An Interview with Geraldine Brooks

The much-lauded writer discusses history, humankind’s failures, and the enduring allure of kings.

Q&A with Stacy Schiff, author of Cleopatra, A Life

The award-winning biographer answers questions about her latest subject: the last queen of Egypt.