An Interview with Louis Bayard

The novelist talks presidents, unconventional courtships, and the allure of Jackie O. 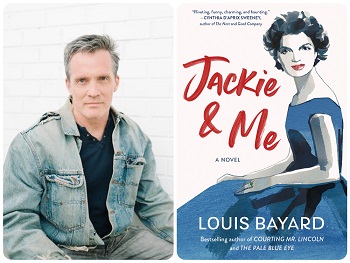 Novelist Louis Bayard, the author of 10 books, is perhaps best known for Courting Mr. Lincoln and The Pale Blue Eye (the film version of the latter, starring Christian Bale, is due out this year). Chances are good, though, that Bayard’s name will now be indelibly linked in readers’ minds with his latest release, Jackie & Me, the story of Jacqueline Bouvier before she was that Jackie; the charming, elusive Jack Kennedy; and their indispensable mutual friend, Lem Billings.

Reviews so far are unanimous in their praise, and I wholeheartedly agree: Bayard’s new novel is charming, compelling, and heartbreaking in equal measure.

The “me” in Jackie & Me is Kirk LeMoyne Billings, known by all as Lem, a great friend of Jack Kennedy’s since their formative days together at Choate. How did you first hear about Lem, and what was the hook that drew you in?

It was a photograph. I got a Princeton Alumni Weekly (which is, confusingly, a biweekly), and there was this startling picture on the cover. Two young 1930s collegiates leaning against a stone wall with their hips thrust in this mock-flirtatious way toward the camera. My first thought was that they were lovers, pre-Stonewall, captured in this one brief moment, but then I started looking at the smaller of the two men, and I realized I was looking at a very young John F. Kennedy. So, then, my eyes traveled to the taller figure, and he was so tall and juicy and hilarious that I had to know more about him, and that was my introduction to Jack’s best friend, Kirk Lemoyne Billings, and a whole world opened.

This is your second consecutive book about the unconventional courtship of a future president. Was that more coincidence than intent, or is there something specific that draws you into this particularly fertile ground for fiction?

In each case, I felt there was something the historical record wasn’t telling us, or else wasn’t able to tell us. With Lincoln, it was the relationship with Joshua Speed, about which we’re still conjecturing. And with Kennedy, there was the relatively unremarked-on phenomenon that his best friend in the world was a gay man who was, at the same time, a front-row witness to the Jack-Jackie courtship.

What kind of sleuthing did it take to peel back the layers of their unusual courtship?

The usual stacks of books on each side of my armchair. The most useful one, probably, was Jack and Lem by David Pitts, which talks quite a bit about Lem’s relationship with Jackie. And, of course, Lem left behind an extensive, now digitized, interview that’s housed within the JFK Library, where he talks quite frankly about letting Jackie know what she had to expect as Mrs. Kennedy.

Of your historical fiction, this is closest to a contemporary story. How did that proximity to the recent past affect your research compared to your previous historical works?

I thought it was going to make the research part much easier because everything in the book happened within living memory, and yet it was still hard to find any kind of historical consensus. You can’t even find total agreement on when and how Jack and Jackie first met, let alone how much time elapsed between their meeting and their actual courtship. The whole chronology is really hard to nail down, so, for me, that just reinforces the idea that history is itself a fiction.

Though you’ve certainly never shied away from putting words and actions into the mouths and bodies of historical figures, in this instance, many of your readers will have their own living knowledge — or at least perceptions and assessments — of these characters. Did that reality change how you approached your character-building and story plotting?

Oh, yeah, this is the first time I’ve written about people who are still alive — Robert Kennedy Junior, for instance (who has surely by now disappointed every hope that Lem had for him). What made it easier, I guess, is that they’re relatively minor in the story. But, of course, there are a lot of people alive who still remember Jack and Jackie and Lem. I meet them at every bookstore. What it comes down to is I’m just telling a story that happens to have real people in it. They do what the story needs them to do.

I suspect Ethel’s still enough of a proud broad not to waste a breath on a punk like me. At the end of the day, though, I don’t worry about what the Kennedys think about me, and I feel confident they don’t worry about me. They’ve been portrayed so often on so many media platforms, I’m guessing they don’t bat an eye anymore.

Did any of your fictional characters end up surprising you?

If my characters didn’t surprise me, I’d think there was something wrong. But Lem does something at the climax of Jack and Jackie’s wedding that neither he nor I saw coming, and those are the moments you live for, really, when the story seems to be telling itself, quite apart from whatever idiotic idea you had about it.

The crux of the story rests on Lem’s stunning sin of omission that betrays both Jack and Jackie — though your readers’ collective gasp is for Jackie. He understands that he eventually lost both of them in different ways, but do you see your Lem as having, to himself, honestly faced the enormity of his betrayal?

I think so. When he runs into Jackie in 1981, for example, the words that tremble on his lips are “I’m sorry.” But I think Lem is as much a victim as she is in some ways. He’s been brought up to think in very particular ways about men and women and their respective gender roles and the whole Great Man theory of history, and it’s really hard to unlearn that stuff, even when you’re on the wrong side of it.

I couldn’t help but think of Diana Spencer, who, of course, was getting married in the summer of 1981, the year from which Lem is looking back. Though Jackie was more sophisticated than Diana and understood more clearly the vetting she was being subjected to, your fictional Jackie was not a fully informed participant in her own courtship, and her free will was compromised. Did you see the same “lambs to slaughter” parallel?

I did! In fact, just as I was beginning the revision of Jackie & Me, I happened to catch the most recent season of “The Crown,” and I was really struck by the parallel arcs between the two women. Jackie, as you say, was more sophisticated, but they were both these rather shy, insecure, blue-blooded maidens tossed without much preparation into a ferociously demanding dynasty. And they both, intriguingly, remade themselves into style icons. I can’t help thinking their couture was a kind of armor against the pressures they faced.

At a Noir at the Bar a few years ago, you read the scene of Lem’s arrest for solicitation. It’s the one plot point you flag as being (as far as you know) fictional, and it carries significant emotional freight. When did you know you needed to include it? (This is, I suppose, the inevitable plotter vs. pantser question: Did you plot it out from the beginning, or did it arise organically?)

I thought, for Jackie and Lem to really dig down to a deeper level, they needed to bare themselves to each other. So, Jackie talks about the loss of her virginity (which would have been a big deal in the early 1950s and which apparently did happen in the way it’s described here). And Lem is forced to reveal his deepest shame, which, for so many gay men of that generation (Bayard Rustin, Frank Kameny, Tab Hunter, etc.), would have revolved around being arrested.

It’s funny you mention the Noir at the Bar reading because, to my surprise, I began to really cry as I read that. [Interviewer’s note: The reading blew the audience away.] It felt, in some Method way, that I was becoming Lem — or maybe just realizing what I still have in common with him, because I think gay men of a certain age are still waiting, at the back of our minds, to be carted off.

The conversations between Lem and the character Raul in 1981 illuminate Lem’s worldview by that point, which remains circumspect. Twelve years post-Stonewall, Lem refuses to allow himself to be drawn into gay culture and identity, feeling that a certain level of “decorum” remains appropriate. He also cannot bring himself to admit that he was cruising Lafayette Park back in the early 50s. We still can’t tell what he’s willing to admit to himself. It’s as though his brain is closeted, and not specifically about his sexuality.

That’s a great insight. In my mind, he’s much more acute and perceptive about Jackie because he has a certain amount of distance from her. The closer he gets to himself, the more clueless he becomes. The gay men I’ve known from Lem’s generation were almost pathologically averse to identifying as gay. They spoke entirely in code, even when they were around other gay men, and that was a direct result of being hunted all their lives. And that feeling of being a criminal can’t help but infiltrate other areas of your psyche. You’re the world’s best secret agent.

Have you heard of By Her Own Design by Piper Huguley, about Ann Lowe and her design of Jackie’s wedding dress — and how the hated dress, with its 50 yards of faille, needed to be recreated two weeks before the wedding because a pipe burst?

I do know that story, and I’m currently reading that book because I’m about to do an event with Piper in Atlanta, so I’m really looking forward to finding the cross-hatching between our stories. And, of course, Ann Lowe was a Black designer at a time when that was absolutely not common, so imagine the stress riding on her shoulders.

You’ve explored three pre- and post-presidents so far (Teddy Roosevelt, Lincoln, and now Kennedy). Any others who’ve captured your storytelling heart we can look forward to hearing about?

It does seem like I’m calling the roll, doesn’t it? Fillmore? Buchanan? I can honestly say that, in each case, it wasn’t the president that intrigued me so much as the people in his shadow. With Roosevelt, it was his son Kermit. With Lincoln, it was Mary Todd and Joshua Speed. And with JFK, it really did begin with Lem. Who was this guy? How did he fit into the larger puzzle? That said, I don’t want this whole presidential thing to harden into a formula, so for the next book, I’m looking across the pond. There won’t be a president in view.

Jennifer Bort Yacovissi’s debut novel, Up the Hill to Home, tells the story of four generations of a family in Washington, DC, from the Civil War to the Great Depression. Her short fiction has appeared in Gargoyle and Pen-in-Hand. Jenny reviews regularly for the Washington Independent Review of Books and serves on its board of directors as president. She has served as chair or program director of the Washington Writers Conference since 2017. Stop by Jenny’s website for a collection of her reviews and columns, and follow her on Twitter at @jbyacovissi.

An Interview with John Edgar Wideman

The lauded author talks race, short stories, and why he doesn’t care to be known as a great American writer.

An Interview with Daniel Ellsberg

The famed whistleblower explains why we're closer than ever to doomsday.