An Interview with Liz Kay

The poet-turned-novelist talks about writing across states lines and timelines — and how laziness kick-started her new book. 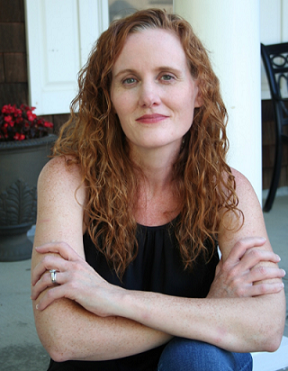 Liz Kay’s debut novel, Monsters: A Love Story, features a recent widow, a Hollywood playboy, a gender-bent Frankenstein tale, and lots of alcohol. It’s a disastrous recipe for the characters involved, but a charming ride for readers. Kay has a background in poetry (she is a recipient of the Academy of American Poets Prize), but switching to prose allows her to fully explore the journey of protagonist Stacey as she discovers love, lust, and success in the wake of her husband’s sudden death.

A recent review in the Independent called Monsters “at times sober, at times heartwarming, the story of this improbably romance is an addictive page-turner, ripe with seduction and charm, that drops insights into this messy, crazy, wonderful thing called love.” Messy, crazy, and wonderful is a pretty fitting description of the book itself.

Like you, Stacey is a poet, but unlike you, she seems unable or unwilling to tackle fiction. What motivated you to enter a new genre, and how do your experiences writing poetry and prose inform one another?

I think it would be very fair to say that at the time I started Monsters, I was sick to death of poetry. In addition to my own writing and reading, I co-edit a journal of contemporary poetry and run a small independent press that publishes single-author collections. I was just drained and bored and I wanted to do something different, something fun. I wanted to do something that did not feel like work, and when I started playing around with the characters of Tommy and Stacey, I was able to tell myself that what I was doing didn’t even count as “writing” because it’s not the kind of writing that I do.

Is it possible to say that I wrote an entire novel because I’m lazy? I was definitely hiding from writing that felt like work. That said, I’ve never been able to stop writing the way that poets write, or the way that I write as a poet, anyway, which involves this very hyper-focused line-by-line composition and revision. By the time I finished the first draft of Monsters, while there were definitely large-scale edits, much of the book existed as it does now. So thanks to my background as a poet, my first drafts are really, really polished.

One of the most interesting things about the novel is that it features a “book within a book” — first Stacey’s novel in verse, and the later film adaptation. How do you manage writing about a book that doesn’t exist? (Unless you have a draft of Monsters in the Afterlife, in which case, can you please publish it?)

I wish I had a draft of Monsters in the Afterlife. Maybe that should be my next project. Initially, Stacey’s book existed only in my head and it was not a retelling, and it was something my agent really pushed me to clarify before we took the novel out on submission. The challenge was to find a story that fit the frame I’d already created. And it needed to be a story that was familiar enough that readers would be able to grab onto it. It took me an embarrassingly long time to settle on Frankenstein, though it seems like such an obvious choice to me now.

Tommy accuses the narrator in Stacey’s book of being a liar. Do you see Stacey as an unreliable narrator? Do readers, as Tommy says, “miss a certain understanding of the character if you take her at her word”?

She keeps an affair with a really high-profile person secret from everyone, including her own sister, for something like two years. She’s a phenomenal liar. And I do think Stacey is an unreliable narrator. Stacey chooses what to draw our attention to, and in doing so, I think the character she really misleads us about is Tommy. It’s him we miss a certain understanding of if we take Stacey at her word, and for Tommy, the word she always gives us is that, whatever he’s done, it’s fine, she doesn’t really mind.

Stacey pretty clearly wants to be with Tommy, and when they are together, she lets him off the hook for some really bad behavior — he’s physically and sexually aggressive to the point that we (and certainly Stacey) should be questioning just how consensual their relationship is, but Stacey doesn’t really dwell on that. Tommy’s big fatal flaw as far as Stacey is concerned is that he just doesn’t want her around enough. And that really blurs our understanding, not just of Stacey, but of him. As long as Tommy’s lack of commitment is at the center of our vision, as it certainly is for Stacey’s, he gets away with a lot that’s much, much worse.

What is the first and last thing you do when working on a writing project?

What a difficult question! I don’t know that it’s the same for every project. I definitely let the ideas that become projects stew in my head for a long time, so it’s hard for me to pinpoint the starting point. By the time I write the first words, I’ve generally been thinking it through for months. The end is also hard to pinpoint. Once a piece is really, really polished, I start getting other eyes on it, whether that’s submitting a poem to a journal or sending a novel around to a few trusted friends. Of course, that’s not really the end either, just the start of the next phase. I’m probably still fiddling with white space and punctuation right up until it goes to print.

Monsters: A Love Story spans years, often skipping months at a time. How did you decide how to space the plot out while still giving enough time for the characters’ actions and consequences to resonate?

Well, I think life moves like that — we have months and months of status quo and then these little flurries of interruption where things feel mutable. I wanted to focus on those moments where there was the possibility of change and of movement. I also, practically speaking, knew the timeline I was looking at, and that to cover this much time in the book, I was going to have to skip over a lot. I didn’t map out much of what happens in these in-between times (though there were certainly a handful of scenes written and then cut), but I always had a sense with each new month what had happened (or more likely not happened) between Tommy and Stacey and where we were picking back up.

Location is key in this book, as Stacey finds herself torn between her life in Omaha and luxurious destinations like Turks and Caicos. How do you go about instilling a sense of place in your writing?

In some ways, the book is a long love letter to Omaha, which is my adopted hometown. Ironically, Stacey feels both stuck and unmoored in Omaha, but for me it’s very grounding. Omaha is the realest place in the world to me, and so it provided the perfect contrast to all of the more fantastic places Stacey flies off to with Tommy, and since Stacey is always worrying over what’s real and what isn’t, it made sense to start there. I loved dropping in all these little mentions of places I like to go to — my favorite restaurants and stores and even the streets I drive on. The added advantage was that when I found myself stuck, I could just put Stacey in a room, in a real place that I know well, and think, “Okay, here’s Stacey. What does she see?” And it would give me some insight into what she was thinking or feeling or wishing her way out of.

Stacey does an awful lot of flying in the novel. Do you have a go-to book for long flights?

I don’t have any go-to books at all. As a rule, I don’t do a lot of rereading of fiction (poetry, yes, but poetry’s not getting anyone through a mind-numbingly long flight). I do read a lot, and I’m constantly adding to the stack of books I’m going to get to, so when I’m traveling, I plan ahead. I’ll start two or three books and make sure I have one that is absolutely enthralling. It has to be a page-turner. In the spring, I was reading Theresa Rebeck’s I’m Glad About You on a plane, and despite an hour delay on the tarmac before take-off, I was so annoyed when we landed because I still had another 80 pages or so. I didn’t want to put it down.