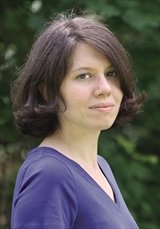 Libby Cudmore’s debut novel, The Big Rewind, begins with a package being delivered to Jett Bennett by mistake, leaving her a little too curious to leave that package alone. “I’ve got a smartphone, but I’m not too young to remember the exact weight and feel of a Maxell mix tape.” It is that mix tape that leads her on the trail to discover that her neighbor, who was supposed to receive the tape, has been murdered. It is the mix tape that drives her to solve the mystery.

What was the seed for this novel, and how did you develop it?

The idea for the book came to me while I was riding the bus home from work, listening to Syd Straw's "CBGBs." It was on a mix tape made for me by someone I hadn't seen in about five years, and I got to thinking about him, and mix tapes, and what someone would think if they happened to hear that mix without me there to explain the history. What would you do if you found someone else's mix tape? Would you listen, and what might you think about? So I began the scene in my notebook, and because I always write crime fiction, I put a dead body in at the end. And I thought, "This is actually the best idea I've ever had" and just went with it. I finished the first draft in eight months, writing every day on the bus and typing it at night.

The Big Rewind has inspired people to compare it to Nick Hornby’s High Fidelity because the main character uses the work of mixing tapes to figure out what he was doing with his life. Was Hornby’s work an inspiration to you? How are the two novels alike and how are they different?

High Fidelity was one of the book's inspirations, along with Raymond Chandler's The Long Goodbye. I loved the idea of cataloging your life by the music you were listening to, of using music as a secret code to express your feelings. Hornby's line, "Records have helped me fall in love, no question," is so true in my own life that if I had more time I would probably cross-stitch it and hang it on my office wall.

I love the book and the movie, but to be honest, I find [Hornby's character] Rob to be the Patron Saint of Hipster Manbabies, so I wanted to make [my character] Jett a little less caustic, give her a little more heart and humility.

The neighborhood you created, Barter Street in Brooklyn, is so interesting that I was really disappointed to discover that there is no actual Barter Street there. What inspired the creation of that neighborhood?

I've had a lot of fans tell me they wished they lived on Barter Street! In creating it, I wanted to give Jett someplace that was just weird enough to set it apart from every place else in the city. I wanted her to be able to mock it lovingly and be able to use her skills to navigate through it. I lived in Brooklyn Heights for a while, and before that, I lived on the Upper West Side of Manhattan, and although so much of what I loved about New York is gone, I still wanted to capture that feeling you have when you're 28 and broke but occasionally okay with it.

Your love of music permeates the book, and not just because of the mix tape motif. The chapter titles are music titles, and Jett selects specific titles for a soundtrack when she wants to think, or relax, or pull up something hidden in her mind. And I don’t remember another novel with its own Spotify playlist. Do you play or sing yourself, or are you more of an avid listener?

I took voice lessons in high school and was all set to major in musical theater in college. But life had other plans, and when I didn't get into theater school, I decided to focus on English and creative writing at SUNY Binghamton. I don't sing anymore — except to my cat, obviously — but I obsessively devour music. My new hobby is a weekly live-tweet of an album from my record collection with the hashtag #RecordSaturday; I do a pin-up of the album cover and share stories about the album, music videos, and concert footage. I even did a craft tutorial with Men At Work's "Business As Usual." It's the highlight of my week.

Something you do very well in this book is give the reader a chance to figure out something before Jett does, so that there are a couple of times when the reader is thinking, "No, Jett, don’t go meet this person! Don’t go there!" Was that suspense easy to create, or did it require a lot of work and rewriting?

I actually didn't know who KitKat's killer was until about halfway through the book, when I decided, "Yeah, I should probably wrap this up sometime." So it did take a lot of plotting, but it wasn't obsessive, up-all-night sweating over it.

We hear novelists described as “planners,” meaning they outline everything that’s going to happen, or “pantsers,” who just start writing and keep going by the seat of their pants until they are finished. How do you work?

I'm mostly a pantser, but because I always start a story in a notebook — I design and make my own — I'm able to jot down notes and quick scenes to look ahead so that I have a general idea of where the story is headed. But usually I have a pretty good idea of a beginning, a middle, and an end shortly after I begin a project.

Is there an interesting story about how you got this first novel published?

I went the very traditional route of cold-querying an agent (Jim McCarthy at DGLM) and he submitted it to William Morrow. But the weekend before I got the call saying that Chelsey Emmelheinz had acquired the book, my husband and I had been turned down for a mortgage on a house we wanted (after we'd paid for the inspection, of course) and we had to put our beloved cat, Ottoman, to sleep. So I was already frustrated and heartbroken, but when I got the email from Jim asking, "Can I call you?" my whole world changed.

The relationship between Jett and Sid is deftly written. Are they likely to appear in a sequel?

I would LOVE to write a sequel, because I like their relationship as partners, friends, and a couple. I think they could solve another mystery together very well.

Right now, I'm having a lot of fun exploring a couple of concepts. I'm just doing brief scenes in my notebooks, trying out a few concepts, some crime, others completely different. It feels good to just play around, try out new things without feeling like I have to commit just yet. But I am working with my agent and my new editor, Elle, to put together a project that will be my sophomore effort. It's an exciting time.

I'm also just enjoying the success of The Big Rewind. The response has been great, and I'm so glad people are connecting with the characters and, even better, the music. It was a long effort, and it's nice to just bask in the afterglow.

Susan Storer Clark is a frequent contributor to the Washington Independent Review of Books. She is a former radio and television journalist and, since retiring from the federal government, has completed her first novel, set in the urban turbulence of 19th-century America, and is at work on her second, the fictionalized life of a slave captured by Francis Drake in 1580. Clark has been a member of the Holey Road Writers for more than 10 years. She and her husband, Rich, recently moved to the Seattle area, where they are remodeling an old farmhouse.