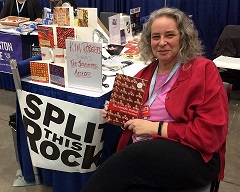 The Scientific Method is Kim Roberts’ fifth book of poems. She’s founding editor of Beltway Poetry Quarterly; editor of the anthology Full Moon on K Street: Poems About Washington, DC; and a literary historian whose research focuses on writers who’ve lived in the District. In The Scientific Method, Roberts combines poems about Thomas Alva Edison and Carl Sagan, the strange mating habits of invertebrates and fish, and rondeaux about U.S. presidents.

What’s a nice poet like you doing writing about science?

Actually, I’m writing about history. See, I’ve tricked you! When I write a poem about Nikola Tesla, I’m not describing his design for alternating current, I’m writing about his obsessive-compulsive tendencies. When I write about Thomas Alva Edison, I’m not examining the workings of the carbon filaments in his light bulbs, I’m talking about all the materials preserved in his laboratory in New Jersey. But the history of science is fun to write about because it has its own specialized vocabulary. Who can resist a good lexicon?

What made you care about the origin of clams and the family of roses?

The natural sciences are so full of surprise. I love that oysters can change sex at will, that clams can live past 500 years — the oldest known animals! — that apples and cherries and apricots and roses are all biologically related. Most of my science poems start with a fact I have read about and fallen in love with. They start with reportage and move out from there.

Only a poet would approach writing of Carl Sagan via his turtleneck sweater.

I didn’t make that up! The National Geographic had Sagan’s turtleneck on display. It wasn’t even a nice turtleneck, just an old, functional piece of clothing. I guess the curators thought it humanized him. But when you put a turtleneck behind glass, when you put it in a vitrine — then it becomes something else entirely. This is why I love museums. Besides books, museums are my most consistent source of inspiration.

In The Scientific Method, you have a poem about Quebec Place, NW, your street. Aren’t you afraid of paparazzi?

Ha! Now that would be quite a problem to have! I started living on this street in 1990. And, of course, being me, I researched the history of my house and all its previous owners. This section of the city was built a hundred years ago — my house was built in 1915, so I was trying to imagine what the Park View neighborhood of DC was like back then. Also, I’d recently read a poem by Marilyn Hacker — she was looking out her window, describing her street in Paris, and her poem was written in terza rima. So I wrote mine in terza rima, too.

What the hell is a Perhapsitron?

That was the name of one of the earliest fusion devices developed at Los Alamos National Laboratory in the 1950s. It never worked, of course. But the name captured something of the inventor’s sense of hope. My poem “Building the Perhapsitron” is a collage of phrases taken out of context from a terrific article in the New Yorker on the history of nuclear fusion experiments in the U.S.

Were you a science nerd in school who just happened to be lyrical? Or are you a poet who fell onto science?

Oh, no. I was horrible in math and science in school! My brother and I neatly separated the disciplines — those were his areas. And he was horrible in English and social studies, which were the classes I excelled in. Part of it was the sexism of the time — girls were expected to be bad in math and science. It was only as an adult that my reading widened and I realized how much wonder and amazement I’d been missing.

Your last book, Fortune’s Favor, was about Antarctic explorers. Who are the subjects?

Fortune’s Favor was based on the actual journals of Robert Falcon Scott, a British explorer whose team was the second to make it to the South Pole in 1912.

I finally got around to reading Scott’s journals. They were published posthumously and have never been out of print. I had to write in iambic pentameter lines to capture a voice so different from mine. And, of course, I was moved by how he and all his men were so ready to sacrifice themselves, to starve, to lose fingers and toes to frostbite, to man-haul huge sledges, even to die, just to reach a patch of ice no different than any other on the continent of Antarctica — just for the mere symbolic idea of reaching the South Pole.

You ARE our DC Literary historian. When I’m at GWU, I always see you in the special collections department with your face in a book. Your forthcoming book will put a gold star on DC for sure.

For several years now — close to two decades, I guess — I’ve been researching the earliest eras of Washington’s literary history and creating walking tours. Some of the country’s most respected writers lived here. But we’re not a city known for literature or the arts. The federal government casts too large a shadow for that. But writers such as Walt Whitman, Frederick Douglass, Mark Twain, and Paul Laurence Dunbar all lived here. And the women writers who are perhaps less well known, but are true giants also: Alice Dunbar-Nelson, Charlotte Forten Grimké, Elinor Wylie, Georgia Douglas Johnson. I’ve finally compiled my walking tours, along with what I’m calling “portraits” of other significant writers, for a combination guidebook and anthology. The book will cover the period from 1800 to about 1930, from the city’s founding to the beginnings of Modernism. So that’s my next book! It will be published in the Spring of 2018 by the University of Virginia Press. The working title is “A Literary Guide to Washington, DC, from Francis Scott Key to Zora Neale Hurston.”

Grace Cavalieri reviews poetry for the Washington Independent Review of Books. Her most recent collection of poems is With (Somondoco Press, 2016).

April is National Poetry Month and reason enough to raise a flag to the Word Works, which has been going strong for 42 years.