An Interview with Kerri Arsenault

The writer discusses Mill Town, a decade-in-the-making book sparked by an obituary. 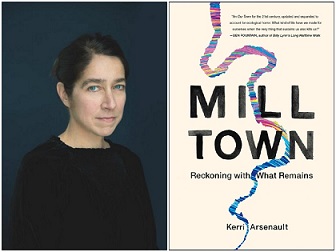 For over 100 years, the community of Mexico, Maine, revolved around a paper mill that employed most of the town, including three generations of author Kerri Arsenault's own family. When Arsenault, an editor at Orion Magazine and a LitHub contributor, returns to her hometown after the death of her grandfather, an employee of the mill, she discovers that while the mill provided the lifeblood for its inhabitants, it also contributed to the decline of the town's economic, physical, and emotional health.

Among Arsenault's many gifts as a writer is her keen sense of place. In giving the reader an aerial view of her town, she writes, "Where stack meets sky, the wide, slow-moving Androscoggin pivots and bleeds south and east, under bridges and over rapids, pushing through dams, slinking around islands and along inlets, skidding through other mill towns of Jay, Lewiston, Topsham, Brunswick and picking up flotsam and jetsam or passengers in canoes."

Exploring universal themes of home and family and our place in the world, Mill Town is ultimately the search for some kind of truth amidst decades of generational silence. At turns jaw-dropping and spellbinding, Arsenault's book, which was just included in Publishers Weekly's best books of 2020, is as compulsive to read as it is heartbreaking.

You’ve said that this book started out with an obituary. Can you talk about how a single obituary grew into a deeply reported, decade-long book project?

My grandfather’s obituary contained information about him I hadn’t known…so I sought to confirm the details as they were laid out. Come to find out, all of it was wrong or somehow incomplete. That obituary showed me the archives of history can be skewed or inaccurate, so I wondered, what else could be wrong in how history records the truth? As I found out, much was. Following this kind of absent or ambiguous information laid the groundwork for the structure of the book, which is to say, there are many tributaries of inquiry that follow unexpected and unknown paths…This also made me consider how environmental stories are told. Toxic disasters like ours are slow and ambiguous and not what we think of as a disaster at all. They are slow violences that don’t follow the thrust of the traditional nonfiction storyline, so I thought, how do I tell this story? How do I make a story urgent that is hardly even newsy?

When you’ve spoken about organizing the massive amounts of research, you said it was like "opening a Pandora's box of [your] nightmares." I'm guessing there was a bit of trial and error when it came to putting things in order. Can you tell us what worked?

I gathered information from historical societies, academic journals, the EPA, experts, legal briefs, sociological studies, poets, environmental historians, lobbyists, courts, lawyers, news articles, chemists, [and] death certificates, and took thousands of photographs. I sent out surveys, talked to high school classmates, teachers, millworkers, students, lunch ladies, my mother, my father, and their friends in order to learn about our town’s past, Acadian history, EPA regulations, logging, toxic substances, cancer statistics and causes, dioxin, organochlorines, chestnut trees, labor unions, and long boring essays about how boilers work. I made trips to France and [Prince Edward Island] and a million trips back and forth to Maine from afar. And the documents and information kept coming in right up until the day the book was due.

To organize, I tried using notecards, a scatter plot, bought Scrivener, put things in piles and files and binders, made timelines and push-pinned crap to my walls. I tried using a genogram — a three-dimensional chart that shows the emotional, genetic, psychological, social, cultural, physical, and economic relationships and patterns across generations and throughout a community. With that in mind, I made a timeline on a long roll of brown paper I found at the dump and plotted death and family and cancer studies and environmental regulations. In the end, putting disparate pieces of information together like this, in chronological order, made the information hum.

At one of your events, you said that the chapters "talk to each other." Can you say a bit more about that? Writers are endlessly curious about how other writers structure their stories.

In the first part of the book, I lean into history more, and in the second part of the book, I lean into the present day. Part of what I wanted to convey was how the past prophesies our future. So I linked chapter 16 to chapter one, chapter 15 to chapter two, and so on, which reemphasizes that connection. In the center of the book is my father’s death, like a target you can’t miss. Although the book doesn’t center on his death, his death centers the book, in that while I was writing about people in my town dying from cancer, my father dies of cancer. And that center target — the interlude/my father’s death — was like the constant reminder we faced in our town, that jobs at the mill always contained the capacity for death…Mill Town also starts with a failure (that of the wrong information) and ends with a failure (more wrong information). That first failure did not trigger success, as most personal narratives do, and so the beginning and end of the book talk to each other in this way, too. And finally, the preamble, the interlude, are their own separate piece but also act as a map and a reflection of the entire text.

Being an insider and/or an outsider is one of the book's themes. At times, you were both. How did the concept of home change for you throughout the writing of the book?

Home is also an accumulation of what I remember, what I saw, what I thought it was like, what I thought was going to happen there. I was also researching the deep and recent past, the present-day situation, and [was] someone writing a book about all of it who still has family living there. I even got involved in town politics. Moreover, identity is not just how we see ourselves, but how others see us! Several interactions with childhood friends underscore that perspective, too.

How did my relationship to Maine change? I believe landscapes define us and we define our landscapes, so as the landscape shifted under my feet, so did my concepts and feelings about it. It’s a moving target, just like catching wind in buckets or trying to connect toxins and disease. My relationship to Maine or home is also an accumulation of perspective, as I describe above, and reflects how dioxin accumulates in our DNA: invisibly but consequentially.

Another theme you explore is one of generational silence. Do you think this millstone (pardon the pun) is particular to New England families?

No. One, I received may emails from readers who commiserate with this kind of silence. Two, there are studies about silence in the workplace that indicates not speaking out against workplace wrongs is a worldwide problem. Three, it’s human nature to protect ourselves against fears by not naming them out loud, because if we name them, there’s no putting them back into the safe containers that held them.

What makes this book different is that it was written by a person from the place where it happened. In a way, it’s a love letter, however complicated, to your town. What sort of book do you think would have resulted if, say, Lawrence Wright had turned his lens on Mexico, Maine?

First, I love Larry. His book God Save Texas: A Journey into the Soul of the Lone Star State (one of my favorite books of 2018) informed the latter versions of my book because he, too, journeyed through his home state and examined the myths it contained. The key differences between a book he’d write about Maine and mine is one of access and experience: While I have a certain kind of local access, Larry (or an outside journalist like him) would have a larger budget AND the backing of a major publication, not to mention he has written 10 books and countless articles for wonderful publications. He also wrote about the whole state, not just one town. Me? This is my first book. And I had no scaffolding, budgetary or support-wise.

Lastly, I know one of your next projects is called Cancer Yearbook. How is this coming together?

It’s slow, but it’s because I’ve not had time to focus on it, which I plan to later this winter. For those who don’t know, the project was initiated as part of the grant I received with Assistant Professor of Architecture History at [University of New Mexico] Aaron Cayer from the Architectural League of New York for their program “American Roundtable.” It’s simply an online photographic record that mimics a high school yearbook. However, this yearbook contains details of another kind: testimony from people who have lived or live currently in the River Valley and suspect (or know for certain) their diseases are or were related to the mill’s toxic releases. This yearbook will create visual evidence — on a more human scale — that shows the connection between industry and illness. It will put faces to data [and] give people a place to tell their stories, be seen, and see others who suspect similar things.

In This I Know Susannah Conway tells her story of bereavement and her journey through grief, and yet it is not a sad book, but rather a most inspiring one.

An Interview with James McGrath Morris

The biographer talks Tony Hillerman, cultural appropriation, and the allure of the Southwest.