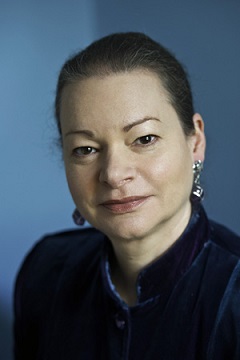 A Cast of Vultures begins as protagonist Sam Clair wakes up with a hangover after another book party. An editor and amateur detective, Sam is in sleuth mode again — this time in her own neighborhood, where mysterious fires are set, neighbors disappear, and a friendly family of squatters is displaced. Sam may not know what’s going on, but she’s determined to find out.

Is writing in the first person like acting in a play? And did you give Sam some of your own attributes, just for fun?

Well, I can’t actually say if a first-person narrative is like acting in a play, since I’ve never acted in a play (or, at least, not since I had to say “Lo! A star!” in my nursery school’s Christmas pageant). Sam’s voice, however, is the voice in my head. I am every bit as snide and snarky as Sam, although usually I only manage to come up with those oh-so-witty responses in the middle of the night, hours after they are of any use. Sam is faster and smarter than me. She’s what I would be if I could only find the right phone booth, rush in, and strip down to that full-body Lycra suit to emerge as — Super Snark!

The description of the inner workings of a publishing house is quite interesting. Is this from research or experience?

The description of publishing is entirely from experience. I was an editor for nearly 20 years before I began to write. I would like to say that I have exaggerated the ridiculousness of publishing for dramatic effect, but I didn’t have to. Even now, my “research” consists of meeting up with my publishing friends for dinner or a drink, and without fail, I come away having learnt of some new absurdity. Only the other day, I was told about a publisher who had produced a Great Fire of London coloring book. So, Sam, of course, immediately fantasized an entire battlefield coloring-book series: "World War I in the Trenches: Color in Death! Rats! Lice!"

Which requires the most imagination, setting or character?

Because everything comes to the reader through Sam’s eyes, characters are mostly described through dialogue, which I really like writing. I find setting harder, trying to get that balance of letting the readers see what you’re describing without being too dull.

What comes first, the body or the story?

Usually it’s a theme, or just an image. The first book [A Murder of Magpies] was set in the fashion world, and was born when I was working as an editor: I had a fashion journalist author very much like [the character] Kit (he has read the book, and says I didn’t make him handsome — or modest — enough). He got me invited to a Christian Dior couture show, which was very thrilling. I thought a murder on the runway might be fun, although that’s not how it ended up. In the second novel [A Bed of Scorpions], I just had the idea of a dead body with a huge red spray of blood on a white wall, like an Expressionist painting, so the art gallery followed. And with this third novel, the junk shop that burns down was a junk shop in my neighborhood that did indeed burn down. The building remained empty for years afterwards, and whenever I walked past, I always wondered about who owned it and why no one ever fixed it up. Since they didn’t do it in real life, I decided to give it a fictional owner.

A Cast of Vultures was a lot of fun to read. How much fun was it to write?

Parts of any book are fun — there are days when somehow you just know where things are going, and it all clicks into place. But there are always far more days, and often weeks, when it’s hard work, and running away and joining the circus seems like a better choice. Happily, I have no skills that a circus could use, so I’m stuck at my desk, thinking up a new adventure for Sam.

An Interview with Sebastian Junger

“The human concern for others would seem to be the one story that, adequately told, no person can fully bear to hear.”