An Interview with George J. Veith 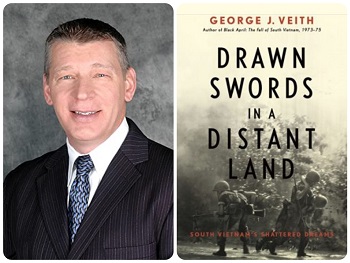 I’ve known George J. Veith, author of the new Drawn Swords in a Distant Land: South Vietnam’s Shattered Dreams, since 2008, when he interviewed me about my own long history of operating in Vietnam as a clandestine collector of signals intelligence against the North Vietnamese. At the time, Veith was working on his first book about the Vietnam war, Black April: The Fall of South Vietnam, 1973-75, in which he briefly quoted me. Recently, I had the chance to speak to Veith about his latest work.

What prompted you to write a new book on South Vietnam’s demise after the publication of your detailed history, Black April, in 2012?

Well, that is a bit of a story. Originally, I had removed most of the non-military material from Black April due to the growing size of the book. I intended to write a second volume about the last two years of the war that discussed all the non-military events. Then as I began interviewing the South Vietnamese cabinet ministers, I realized that there was a bigger story here about Nguyen Van Thieu, one that had never been told. So, I switched to writing basically a biography of Thieu.

However, as I delved deeper into that, it became apparent that there was so little material on him, especially for his early years, that any book on Thieu would have serious gaps. Several friends whose opinion I respect had independently come to the same conclusion. Then I realized that while there had been many books on President Ngo Dinh Diem, no one had really dived deep into what came after. A serious hole existed in the historiography about not just Thieu, but how the South Vietnamese had attempted to build and defend their country. That realization, that no one had ever told the South Vietnamese story, led to the book.

So, you agree that the two most powerful figures in South Vietnam’s history after 1960 were Ngo Dinh Diem and Nguyen van Thieu? How were they different and what qualities did they share?

That also requires a more detailed response than this short [interview] will permit, but in my mind, there were three major ones. First, and I think most important, Diem had a vision for South Vietnam that was centered on self-reliance and a modernized version of Confucian thinking. In Diem’s worldview, the executive led the country, and the peasants followed his leadership and orders. Thieu, on the other hand, viewed modernizing the country along more decentralized lines. He wished to create an “ownership society,” where individuals, not the state, could create their future.

Second, Diem was impervious to outside thinking; he remained single-minded, almost monomaniacal in his pursuit of his vision. This iron will enabled him to build a state out of the colonial rubble that the French had left him, but it eventually alienated many of his early supporters. Thieu, who could also be implacably stubborn, at least possessed the flexibility to realize he needed U.S. aid and technical assistance to help build his country.

Last, Diem had no use for democracy. Thieu viewed democracy as offering his people an alternative to Communism that could rally them: freedom and individual ownership.

Is it your judgment that the U.S. decision to cut off funding for Vietnam was the death knell for the country? Or were other factors decisive?

We never totally cut off funding; we just reduced it to the point that the South Vietnamese military lost its most important attributes — mobility and firepower — which eliminated the [South Vietnamese Air Force’s] offensive capability. I always point out that geography plays a key role in defending a country, and South Vietnam, with its long, wide-open western flank, was extraordinarily difficult to defend. Any attacker possessing modern equipment could easily mass undetected and overwhelm an initial objective. South Vietnam would then need the equipment and logistics to counterattack. By 1975, it had neither.

I have always believed that the so-called Provisional Revolutionary Government (PRG) was a fiction invented by North Vietnam to create the impression that an independent communist movement was operating in South Vietnam. All Vietnamese Communists, in other words, were under the iron control of Hanoi. Do you see it that way?

Absolutely. Anyone who claims that the National Liberation Front [aka the Viet Cong, backer of the PRG] was not a creature of Hanoi is delusional, both then and now.

What lesson should the U.S. draw from the story of North Vietnamese conquest of South Vietnam?

That creating a democracy and building a state during a war is an extraordinarily difficult task, one that requires patience and wisdom. We encouraged the South Vietnamese to create a democracy because it offered a direct comparison against Communism, but also as a means to convince the American people that this was a battle worth fighting. However, we need to remember that freedom is one thing, but that building a democracy in a country at war and in a culture that had never experienced the rule of law, that views an opposition as traitors, and that press criticism is permitted, requires time.

That the South Vietnamese created a constitution, held numerous elections, and had an energetic opposition is a telling indicator that it was working, but that political scandals and other blowups are par for the course in developing countries. It is not an easy path to walk for either them or us, especially when American boys are being killed, and American money is being spent by the billions.

You mention some major historical revelations in your book. Can you outline a couple?

There are many, but the two main ones are the information from South Vietnamese sources about the Anna Chennault Affair, and the secret efforts by the Chinese at the very end of the war to intervene to prevent a North Vietnamese victory.

Regarding Chennault, this controversial account has sparked a litany of scholarship suggesting that Nixon tapped Anna Chennault, the Chinese-born widow of wealthy businessman Claire Chennault, as a backchannel to the South Vietnamese president via his ambassador to the United States, Bui Diem. Advocates of this popular narrative claim that Nixon secretly attempted to convince Thieu to not attend the Paris talks in order to torpedo [Democratic rival Hubert] Humphrey’s momentum heading into Election Day and hand Nixon the election. Nixon would then support Thieu’s peace demands as president. Thieu did refuse to attend, and Nixon won the 1968 election by a narrow margin. Thus, the two events have become intimately linked in the popular consciousness.

Focused solely on U.S. evidence and Nixon’s later Watergate crimes, believers in the Nixon conspiracy miss the possibility that Thieu and his Asian allies had their own motives for influencing the election. According to Thieu’s closest advisors, Chennault did attempt to convince Thieu not to attend the Paris talks, but she did it at the behest of Chinese nationalist leader Chiang Kai-Shek, not Nixon. Nor did she use Bui Diem as a conduit. She used Thieu’s brother, Nguyen Van Kieu, the South Vietnamese chargé d’affaires in Taipei, as her main conduit. Kieu had long acted as his brother’s go-between with various constituencies in South Vietnam.

The most explosive story, however, is the revelation, from both South Vietnamese and confirmed by North Vietnamese sources, that the Chinese had offered to new President Duong Van Minh through two emissaries to insert troops into Saigon to help defend Minh’s new government against Hanoi. China did not want a unified and potentially hostile North Vietnam on its southern border that might ally itself with a hostile Soviet Union on its northern border.