An Interview with Gail Honeyman 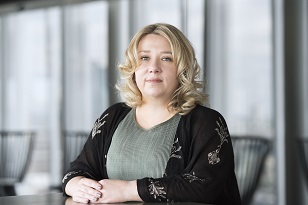 In her debut novel, Eleanor Oliphant is Completely Fine, Gail Honeyman dissects the life of a woman in her thirties whose world is filled with trauma and personal challenges. Honeyman brilliantly adds a dose of quirky humor to a potentially extremely dark narrative. In an email interview, the author speaks of her motivation behind the novel’s unusual main character and the exploration of abandonment.

What writers inspire you?

I love contemporary fiction, but I also read a lot of 19th-century fiction, particularly fiction written by and about women, and I had that in mind when I was writing Eleanor Oliphant — the idea of a strong, independent heroine with a distinct personality and a complicated history.

Where did the idea to tackle such complex topics like we see in this novel come from?

The idea initially came from an article I read about loneliness. It included an interview with a young professional woman in her late twenties who lived alone in a big city and said that she'd often leave work on a Friday night and not speak to anyone again until Monday morning. I was struck by this — when loneliness is discussed, it's usually in the context of older people. Thinking about it more, I realized that there were plenty of potential routes to a younger person finding themselves living that life through no fault of their own, and also how hard it can be, at any age, to create meaningful connections. From this, the story and the character of Eleanor began to emerge.

From the beginning, the reader is set up to, in a way, dismiss Eleanor’s emotional state due to the title of the book, which we soon find is a misnomer. Why is Eleanor in such denial?

Narratively, we encounter the character of Eleanor at a point in her life when things really do have to change. The catalysts are quite small events in the end, but at this stage in her life, having endured some very challenging experiences in her past, the fact that she has not fully addressed or come to terms with them makes the idea of her being able to maintain some kind of status quo seem untenable.

When we first meet Eleanor, she struggles with social and emotional-development skills. Do you feel that this is apt commentary on the millennial generation?

I don't think so, no. I wasn't looking to generalize or draw conclusions about Eleanor's generation — she has had a very specific set of experiences, many of which are traumatic. As a result, she has learned how to survive but not how to live, and this is also reflected in her social and emotional development.

Raymond and Sammy are the first friendships for Eleanor, but initially she resists becoming too close. Is it because of her social anxiety or actual fear?

I think, for Eleanor, it is about self-protection. If she doesn't let people in, they won't be able to hurt her. But, by the same token, they won't be able to help her, either. Opening up, taking that leap, is something that she has to learn to do over the course of the novel. Relationships [and] friendships are a fundamental part of the human experience, and it was important that Eleanor come to realize this.

If you could sit down with Eleanor and tell her anything, what would you say to her?

Mental illness is a controversial topic in the United States; people still battle with the stigmas of being “crazy” or “damaged goods.” What are you hoping will stay with readers after they've finished this book?

This is an important and complex issue, but what I wanted to highlight in the book was simply the importance of kindness, to show that we often have no idea of the burdens the people around us are shouldering, and that the smallest acts — tiny, everyday kindnesses — can be completely transformative for the right person at the right time.

How did you find balance between humor and tragedy in the plot?

I was trying to create realistic characters and lives, and so humor and tragedy both had to be present. Even in the most trying times, people will still find things to laugh about (albeit the humor can be very dark sometimes). That said, I didn't ever want the reader to laugh at Eleanor — the first-person narrative means we can see that there's no deliberate intention to offend when she sometimes speaks or behaves in challenging ways. I also tried to ensure that Eleanor was never self-pitying, however distressing the circumstances, so that there was space for the reader to draw their own conclusions about Eleanor and, hopefully, to empathize with her.

Given unprecedented access, thousands of pages of once secret documents, and hundreds of interviews, Garrett M. Graff takes us inside the FBI and its attempt to protect America.