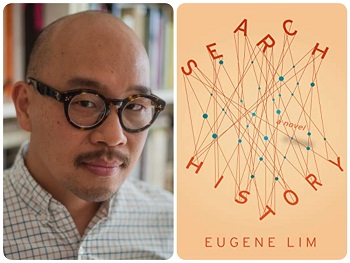 Eugene Lim’s work has been called “elegant,” “whimsical,” and “profoundly moving.” His new novel, Search History, like his previous three — Fog & Car, The Strangers, and Dear Cyborgs — balances humor and tragedy while drawing the reader in through the intensity of his ideas and the astonishing vitality of his prose. It tells the story of a quest that moves its characters to deal with memory, identity, technology, and the state of the novel itself.

Search History is an experimental novel with a unique form and structure. But its central concern is expressing and processing grief. How did you come to focus on grief?

A good friend died. The shock of it, the strength of the emotion, made the subject of grief on the one hand inevitable — or at least inescapable. But I also didn’t want a confessional novel. And I was worried that anything that was remotely sentimental would dishonor my friend, who really was very honest and who would have objected to anything emotionally manipulative or anything that was mere performative product of the grief industry. So, both the emotional heart of the book and the artistic challenge came abruptly and immediately.

The novel includes interesting visual elements — illustrations, photographs, and artwork. Sometimes these appear in places other than where the text might suggest is logical. What do you hope these visuals add? How did you come to decide where they appear? I’m thinking specifically of the opening illustration, which visualizes the end of the novel. 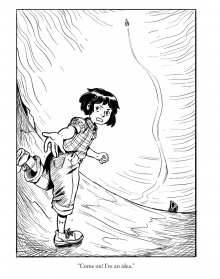 That opening drawing [pictured at left] is by a wonderful artist named Wendy Xu. In that case, it is a foreshadowing of the adventure tale — of which the rocket ships and car chases are tropes thereof — as well as an example of, and commentary on, this kind of illustration as a technology used in children’s books. When I was a kid — maybe you had a similar experience — you would read an adventure story, and the book would have these scattered illustrations throughout. And these drawings would often come a page or two before or after the action they were describing, and, furthermore, the picture would always be off from how you had visualized the scene.

So, there was that disjuncture between image and text. That disjuncture, at its core, signals the great openness or indeterminacy or ambiguity of written narrative. We all can see — in fact, we all create — our own versions of the “same” story; the text holds all those possibilities. And even more fundamental to the book’s central theme, the last lines that are echoed or anticipated by the caption of that drawing (as well as the adventure genres used throughout) speak about how we create stories to make sense of that which we cannot truly comprehend. We still only have tales and guesses about death; we make up stories to deal with the ineffable rather than admit their ineffability.

There are two “Autobiographical Interludes” in the novel — one using Joe Brainard’s “I Remember” structure, which is a mainstay of creative writing classes, especially for younger children. Why did you want to insert autobiography here? And why did you want that section in such a well-known structure?

I think the “Autobiographical Interludes” serve to anchor the fantastic flights, which, in their way, are allegories of how we confront, or deny the reality of, death. Without these anchors, the adventures might be mere lark. But when the “secret engine” of a novel is revealed via these interludes — autobiographical sections about my grief and being witness to my mother’s aging — the fantastic and cartoonish adventures become grounded, converted to gallows humor or the sweet and sad laughter that erupts from good memories of that which has been lost or which one is in the process of losing. And Brainard’s technique, in particular, is a genius way to present a personality and history in pointillistic fashion, which I think might be, while denying a continuous flow of narrative, in an odd way more honest about an inability to make an accurate representation or “true” story from a person’s rich and complex life.

Running throughout the novel are reflections on Asian American identity. One way you do this is through references to Asian American artists and writers. Can you talk about that motif here?

There’s a joke in the book about a fave restaurant that a group of friends dubs “Inauthentic Sushi” — which is somehow absolved of its inauthenticity due to its various immigrant employees and its excellent Philadelphia roll. I think of Basquiat saying, “I am not a Black artist, I am an artist,” and comparing that to Toni Morrison’s affirmation of her project when she says, “I’m writing for Black people.”

The idea of authenticity and the burdens of representation I think are particularly vexing for the artist of color. Historical context and personal experience change an artist’s relationship and responsibility to issues of identity. Asian American artists of all kinds also must confront this issue, but the comedians are especially vulnerable — and therefore seemed to me good representatives of artists dancing around such traps — because they are practicing a very commercial artform in a marketplace at least formerly (and largely still) consisting of an audience that is not like them. And they are often doing this while risking material that pokes at (or replicates) the day’s great taboos and hypocrisies around race and identity.

Pat Morita started off as a night-club comic and navigated his way to showbiz success despite a very tough personal life. I think he loved performing despite all the barriers in his way. The story of him accidentally getting booked to do (and winning over the audience of) the anniversary dinner of the survivors of Pearl Harbor is, I think, amazing. He persevered through all of that; he performed because he loved performing. Was he tortured by his personal demons and was he full of contradictions? Yes. Was he authentic? Insofar as the term has any meaning, absolutely.

Search History is built from a number of narrative forms and a constantly shifting tone, pace, and plot. Toward the end, you discuss the novel itself as a search for form. Why is that search so important?

I think the history of art is one of wrestling with forms. Successful, new forms articulate new ways of thinking and seeing, reveal our tacit assumptions of ideology, and create and foster new habits of mind. The novel on one hand feels an antiquated technology, a static long-form narrative created by linear text. It would seem an unlikely candidate to address our visually drenched, hyperlinked, multitasked, attention-destroying, data-deluged world. And yet. We still are creatures who think largely in language (or, at least, we think that’s how we think), and so a new form of a novel that can morph in front of our very eyes and try to be a container for the tremendous social, economic, and technological changes and crises that abound might surprisingly still (this is the hope) be relevant.

An Interview with Lalita Tademy

The author of the acclaimed Red River and Cane River is back with her third historical novel.