The journalist’s new collection shines a light on “hidden Maryland.” 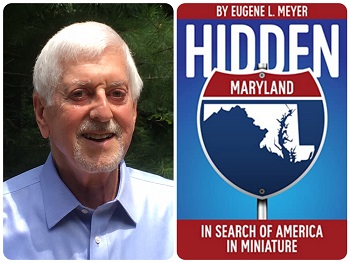 As a former longtime reporter at the Washington Post, Eugene L. Meyer is no stranger to tracking down a great story. He’s also an outstanding writer. So, it was my good fortune to work with him for many years at the late Maryland Life magazine, where Gene penned a popular feature called “Hidden Maryland.” Each issue, he’d unearth some little-known tidbit about the Free State and share it with readers. Happily, he has now collected and updated those pieces in the newly released Hidden Maryland: In Search of America in Miniature.

If I recall correctly, we didn’t assign topics for “Hidden Maryland” at Maryland Life; you chose them yourself. Where did your ideas come from?

For Maryland Life, I revisited a few places I’d written about for the Washington Post, either for the daily paper or for a weekly column coincidentally called “Maryland Life.” But there were also assignments to report and write about people and places not well known to me, like the Preakness at Pimlico (and streamed at Laurel). Other stories came to me from sources: the wonderful Double Boom Playground in Crellin in Garrett County, thanks to the late Gary Yoder, a raconteur and friend. I drove U.S. 40 West, as I’d done before, but I also explored the lesser-known U.S. 40 East from northeast Baltimore to the Delaware line. I’d always wanted to write about the Mudds of Maryland (Dr. Sam Mudd had mended the wounded leg of Lincoln assassin John Wilkes Booth), and I found and assembled a slew of descendants at his home in Charles County in Southern Maryland and even took a group picture. Similarly, I’d long looked for a reason to write about the St. Mary’s softball teams and curling, typically a Canadian sport, in the national capital region. Maryland Life gave me permission to do it all.

What are some of the lesser-known things about the Free State that most surprised you when you stumbled on them?

Since I’d been covering Maryland for the Post for three decades before I left in January 2004, I’d have to say nothing really surprised me, but there was much that delighted me. I already knew a great deal about the state’s remarkable diversity, earning it the “America in Miniature” nickname, but there was the bonus this time of meeting new plainspoken people where they lived their lives without pretense, without artifice. Outside the urban areas, I met folks on their own terms and found them to be friendly and open. We did not discuss politics or other subjects that so divide us today. I suspect if I went back to them, we could continue those amicable conversations. I like to think I can relate to anybody. I don’t even formally “interview” people for stories. My approach is to ask if we can chat. No formalities. No tape recorder. No gotcha questions. No carefully curated answers. Just a chat.

What do you hope readers take away from Hidden Maryland?

Obviously, the state’s diversity, encompassing maritime, metropolitan, and mountain settings and cultures. In a larger sense, the state reflects what’s good about our country. Not only in its variety of physical landscapes and urban, suburban, and rural locales, but also in its people. What I hope readers will learn is that it’s possible, even in our troubled, polarized times, to speak to one another without condescension or antagonism. Amid the culture wars, people have far more in common than otherwise. I hope readers will see the goodness and basic humanity in the many and diverse characters who inhabit Hidden Maryland. The pictured scenery [in the book] is also a plus!

Did your long career as a Washington Post reporter influence the kinds of stories you’ve pursued as a freelancer?

Interesting question. My M.O. at the Post was always to be in the paper and out of the office as much as possible. The neat thing about working for a newspaper for a long time is you get to have several careers in one. I loved covering courts and crime. I liked to dig for stories and scandals nobody else had. But I had always wanted to be the Charles Kuralt (Google him) of Maryland, exploring back roads and forgotten places (and finding extraordinary ordinary people). Henry Allen, the great Post Style editor, dubbed me “Mr. Maryland,” a title I wore with great pride if not prominence. So, when I left the Post, the upstart Maryland Life magazine allowed me to continue along the same back roads to find and write about “Hidden Maryland,” but also to do some remarkable profiles of people like crime-noir novelist and filmmaker George Pelecanos, wine guru Robert Parker, and Tony Mendez, the master of disguise portrayed [by Ben Affleck] in the 2012 Oscar-winning movie “Argo.”

You’ve written several books, but Hidden Maryland is the first one you self-published. How did the process differ this time around compared to going the traditional route?

Ideally, a self-published author can earn a higher percentage in royalties compared to the 10 percent of the net sales initially doled out by traditional publishers. We will see how that affects my bottom line. But I will say that my production costs were quite modest, so whether you buy the e-book or the paperback, it’s all good! On the other hand, self-publishing has it challenges. I hired a freelance proofreader, but not all of her corrections made it to the PDFs I had to review. I also hired a designer who took my Word document of text and many color images and turned them into what I would modestly call a quite attractive book. We went with KDP (Kindle Direct Publishing), which means the book is sold exclusively through Amazon. Loading the finished book onto the KDP platform was a challenge we finally overcame, but don’t ask me to explain how.

Pricing the book also falls on the self-publisher. What’s the sweet spot for an e-book? For a paperback? Given the many color images, there is a wide gap between the two. At $4.99, the e-book is priced to sell. The more expensive paperback is priced to keep. Both, IMO, are good buys, but the market will decide. One similarity between traditional and self-publishing is in marketing and publicity. Unless you are Bob Woodward (Hi, Bob!), you are pretty much on your own in arranging speaking gigs and generating clicks and sales through your own website and connections. For Five for Freedom: The African American Soldiers in John Brown’s Army, my last book, published in June 2018, I have made about 40 appearances (most during the pandemic and, until recently, on Zoom), and I’ve personally snagged most of them. Oh, did I mention that I am available for interviews and features? Contact my publicist, which is to say, contact me.

What’s your next book? (Notice how I didn’t ask if there’ll be one?)

That’s a great question, and thank you for asking. My work-in-progress is Maestro! The Magnificent Previns and the World That Made Them. It tells the parallel stories of my great-uncle Charles Previn — prominent in vaudeville, Broadway, early radio and Hollywood; a friend and associate of George Gershwin — and my late cousin André Previn, the multiple Oscar and Grammy winner whom Charlie brought to the United States from Europe with his family and then to Hollywood, where, as the musical director of Universal Studios, Charlie helped launch the wunderkind on the road to fame and fortune. Not incidentally, Charlie saved his German Jewish relatives from the Holocaust. It’s a dramatic family and show-business story set in times of war and peace, economic depression, and postwar politics and prosperity, into the present.

Holly Smith is editor-in-chief of the Independent, on whose board Gene Meyer serves.

Q&A With Marvin and Deborah Kalb

A father-daughter team explores "The Haunting Legacy" of the Vietnam War.