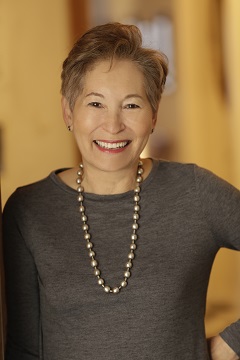 How did you come up with the idea for On Turpentine Lane?

Two things: first was the house, based on the scariest one on my childhood street, which was dilapidated, with black shingles and dwarfed by overgrown trees and shrubs — the whole thing looming large in my memory. The owner had been a reclusive widow, always dressed in a long black, witchy dress, rarely seen. I used to cross the street rather than walk past her house and certainly never trick-or-treated there.

Fast-forward 50-plus years, and I found out that my best friend in the neighborhood had bought the house and moved in. I was astonished. I was going to write an essay about visiting a house as an adult that had spooked me as a child, but couldn’t get it going. Then it struck me as not only a setting for a novel, but a character in the story — a house with a past that was news to the buyer. And the second thing that inspired me was [protagonist] Faith’s job, that she wrote thank-you notes for a living. As soon as someone told me that such a job existed, sometimes called “Director of Stewardship,” I thought, “That’s the next job I’m giving a character!”

The novel, at least to me, is a laugh-out-loud romantic comedy with hilarious banter between the characters. Talk me a little through the process of how you created those conversations.

Oh, dear. That’s a hard question to answer because dialogue is the easiest component for me, so not what I think of as a process. I let the characters talk (and I don’t mean that I’m channeling voices and taking dictation), but I do it critically, one exchange, one line at a time. I ask myself as a conversation moves along, “Why is she telling us this?” If it’s neither helping move the story along, or helping characterize or develop the character, then out it goes. I never want to write exchanges of the “hello-how-are-you?” variety or use it to plant information.

I always try to follow David Mamet's advice (based on William Goldman's advice): “Get into a scene as late as possible, and leave it as early as possible.” I also try to put the feeling into the dialogue, whether it’s anger or joy or excitement or disappointment, rather than express it with “he said angrily,” or “cheerfully” or “dejectedly,” which I see as amateurish. But occasionally, a great, unexpected adverb is just the ticket.

Stuart, Faith's fiancé, is such a cartoonish character in his immaturity and overall cluelessness about Faith and their relationship. Was it fun writing his character?

Oh, so much fun. I knew he was a douche-bag from the get-go, and a very un-self-aware one. Also, very earnest, and doing earnest is always fun. It was apparent from the beginning that Faith would dump him, but I didn’t want the novel to let him off so easily. He keeps reappearing.

"Turpentine Lane" seems like an appropriate name for everything that goes on there. How did you come up with that?

There’s a street named Turpentine in Liverpool, as suggested by the ex-Liverpudlian whom the book is dedicated to. The book’s setting, Everton, is also a double Liverpool reference, football club and neighborhood. I like using British names of towns and streets for New England locations — as the map of Massachusetts attests. It seemed just right, a nice strong noun — memorable, maybe a little amusing, even if toxic. And not even far-fetched: It turns out there are many Turpentine streets (Rd., Cir., Ave., Trail) in the U.S.

Which character was the hardest for you to write?

Hmm. Maybe Faith, but only because she’s the narrator and that’s the biggest job. She’s on every page. Yet, I do think there’s a lot of me in her, which is something I don’t usually admit.

Did you already know how you were going to end the novel when you started writing it?

Happily! Both that excellent scribe Will Shakespeare and I end comedies with weddings.

In all its humor, the novel touches a lot on family and relationships. Is this something you particularly wanted to highlight?

Because I don’t know in advance where the story is going, I can’t say that. Every day as I sit down to write, I ask, “Now what? Something interesting has to happen. What’s next?” In the case of On Turpentine Lane, the raw material was the workplace, Everton Country Day, Faith’s house, Faith’s family, Faith’s love life. I’m sure if I mapped out turns in the story, I’d see each plot point as a result of me thinking, “I don’t want to tread water. Something interesting has to happen now.” Family relationships got their turn in the spotlight.

What would you like readers to take away from On Turpentine Lane?

I only want readers to enjoy it. When people write me and say, “I laughed and I cried,” that’s all the reward I need. I also loved that several reviews mentioned that it was the book that was needed at this particular time (i.e., post-inauguration).

What projects are on the horizon?

I’m about two-thirds into the next novel, which involves a high-school yearbook that an overly invested woman leaves to her daughter. No title yet. And my son is getting married next month!

Q&A with Eric Dezenhall, author of The Devil Himself

The Devil Himself, Eric Dezenhall’s sixth action novel, draws from a stranger-than-fiction episode in World War II, when the U.S. Navy called upon the patriotism of New York City’s gangsters to help plug security leads to Nazi Germany.