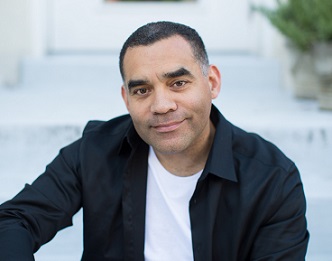 E.A. Aymar’s third novel, The Unrepentant, grabbed me by the throat from its first page and didn’t let up. It wasn’t always an easy read — there were a few brutal scenes that I had to get through with one eye closed — but it was memorable and tense. A gritty thriller that takes on the very serious issue of sex trafficking, The Unrepentant is a novel of revenge and redemption, but it’s also a novel with heart and even a bit of humor.

When I finished, I wanted to know more about the book’s origins, the process of writing it, and the reactions Aymar’s gotten from readers. So I asked him. And this is what he said.

You’re in an elevator with [insert name of famous writer you’d be really excited to be in an elevator with]. Writer turns and says, “What’s your book about?” You have until the 15th floor to tell him/her the plot. What do you do for air when the elevator shuts down and you’re trapped for hours with no escape?

One time a vending machine wouldn’t take my crumpled dollar bill, and I alternately wept and considered cannibalism. So, this isn’t a situation I’m particularly equipped to handle. Honestly, there aren’t many situations I’m equipped to handle, unless you need a replacement player for your kickball team (I’m really good!) or a primer on modern underground hip hop. Then I’m your dude.

But, for the sake of your question, let’s assume that the writer is John Updike. He’s dead now, so it wouldn’t be much of a conversation, so we’ll pretend he’s alive. I’d tell him about my book and, if I had any indication that he was feigning interest, I’d eat him once the power went out.

Um…I was just kidding. What I was really asking was: What’s your elevator-ride description of your book?

In The Unrepentant, Charlotte Reyes runs from an abusive home only to end up tricked, kidnapped, and spirited across the country by a group of criminals. She escapes them with the help of a retired soldier named Mace Peterson and realizes, to fully escape them, she needs to kill them all. Hijinks ensue!

I was once at a Steve Almond reading where he read a story entirely from a woman’s point of view. At the end of the reading, a woman in the audience yelled at Steve for daring to write from a female perspective. She said, “That’s not how women think.” Steve’s response was, “I’m not saying that’s how women think. I’m saying this is how this woman thinks.” Do you ever worry about writing from a woman’s point of view, especially about an issue so charged as sexual abuse and trauma?

Yeah, that’s really tricky, and I can understand why it’s unwelcome. There’s such a passionate and necessary debate about voice going on right now, and I’m a fan of the #OwnVoices movement. And that movement doesn’t say a writer can’t adopt a perspective outside of his or her own. You just want to be careful not to co-opt or appropriate it, or portray it unfairly.

When it came to my approach with Charlotte, that’s one of the reasons I decided to write the story in third person. I’m outside her experience, and really just relaying what she went through. In scenes where the violence was a bit more graphic, I described it the way I wanted to and not the way I think she would have (or, for that matter, the way Mace would have). And, for that reason, I was able to pull back, and I didn’t have the issue of justifying, “This is what this 18-year-old girl would think right now.” Rather, I had to concentrate on what that 18-year-old girl would do. That’s also complicated, but less intrusive or assuming.

Give me three words that describe your writing style.

No! Instead, I’m going to give you an analogy I’ve been using lately. I want people to read my books like fast food. I want a reader to eat it quickly, enjoy the meal, and then, afterward, not feel so good about themselves. I want the book to stick with them, and I want it to be disquieting. Which is what McDonald’s does to me.

You wrote a pretty dark, brutal novel here with a lot of terrible people in it. Did you have any trouble staying with this project for a long period of time?

That’s a pretty good question. The novel alternates between many different characters, and if I’d written from the antagonists’ perspectives for a more significant amount of time, I probably wouldn’t have written the novel. Instead, I was able to spend most of it with Mace and Charlotte, and I like both of them a great deal. I only had to give the antagonists an occasional glance, and that was palatable for me.

What are your must-haves for crafting villains, and what do you try to avoid?

It really changes depending on the book. I tried to create shades of badness with the villains in this book. For the most part (and I think a lot of writers do this), I want to create nuanced characters throughout the work. I don’t want to make a one-dimensional hero or villain, and I want to try and understand and portray the reasons people do good and bad things.

So the baddies are given backstories, and none of those stories are intended to justify what they’ve become, or even explain it — but I felt like those backstories were important to understand them and some of what they do at different points. Except for Barnes, the chief villain. I didn’t give Barnes a backstory because I didn’t want justification for him. I didn’t want Barnes to be freed from his sins. Evil happens, and it’s evil, and there’s no greater reason for it. At one point, Barnes himself offers a justification, but I didn’t want that justification to come off as biographical.

What did you learn about yourself in writing this book?

I’m not a sociopath (great way to start this answer), but I can generally gaze at terrible things for a long time. Probably because of curiosity, probably because I feel like some writers have a responsibility not to look away.

But I absolutely don’t have the strength to do what the women and men fighting human trafficking do, which is to never look away. Particularly women who have been through some terrible experiences and are doing their best to make sure others don’t suffer. A lot of their work ends up focusing on children, and I can’t imagine a heavier burden. Those people are amazing. I can’t be one of them, but I’m glad they exist.

What’s the best piece of advice you’ve gotten about writing?

The most encouraging thing I ever read was in the book The Art of Fiction by John Gardner. He wrote that book in the 1980s, way before self-publishing was much of an option, and when the paths to getting published were extremely limited. And he talked about how hard it is, and wrote something along the lines of, “most people I know, who really wanted to get published, did.”

I started writing seriously in the late 1990s, and publishing hadn’t changed much since Gardner’s book. Self-publishing wasn’t something I could consider, and small publishers hadn’t really become a movement. So reading those words back when I was writing and dealing with rejections and couldn’t imagine ever seeing my words between covers of a traditionally published novel…that was so helpful.

What’s the nicest thing a reader/fan has ever said to you?

Getting the positive Publishers Weekly review for The Unrepentant was wonderful, and the Book Riot and BOLO Books and Crimespree reviews and others meant the world to me. The Unrepentant is my third published book, and the first two certainly didn’t receive that kind of praise. Or attention.

To that end, I began to have doubts about those books, particularly the first. I’m hard on my writing and rarely satisfied with it, and that’s both a very healthy and unhealthy attitude. But The Unrepentant is a book I’m proud of. It’s a book I wanted to write, and I didn’t know how anyone would respond. I treasure those responses.

Part of the reason the other books didn’t get attention was because I didn’t know anyone. I’ve since made good friends with other writers, writers I love and admire. So getting an unexpected note from Kathleen Barber that she’d read and enjoyed my book, or Angie Kim, or Sarah Erdman, or you…it’s lovely.

This is a great time to be writing crime fiction, particularly in the DC area. To feel like a true part of that great movement, one of the best in the nation, is incomparable.

Tara Laskowski writes a regular column, “Long Story Short,” for the Independent. Her debut novel, One Night Gone, comes out in October.