An Interview with Don Winslow 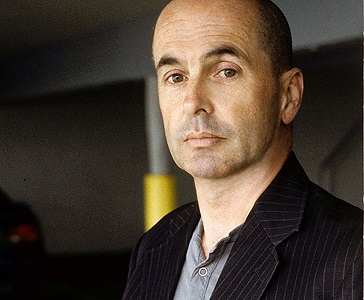 Don Winslow is one of those authors who makes writing seem effortlessly easy while being effortlessly cool, neither of which I’ve ever managed to do. I discovered his books a couple years ago through a friend, Keith Rawson, and subsequently went on a binge, tearing through the Boone Daniels novels and The Winter of Frankie Machine, then Savages and The Kings of Cool, and finishing up with the sublime and harrowing The Power of the Dog. His latest book, The Cartel, the highly anticipated sequel to The Power of the Dog, comes out today from Knopf.

Whether it’s surfing PIs (an idea I always wish I’d thought of) or an epic dissection and takedown of the War on Drugs, I can always count on picking up one of Winslow’s books and being both entertained and inspired to make my own novels better. So when the opportunity arose to ask him a couple questions, my inner fanboy jumped at the chance.

I’ve noticed a lot of crime fiction gravitating toward the Mexican border, from Chris Irvin’s Federales to Sam Hawken’s Border Trilogy, even onto the FX series “The Bridge.” What compels you to explore that area in your novels?

Well, that’s where it’s happening, isn’t it? Drugs are the most important topic in the world of crime today, and the overwhelming majority of them come across that border. It’s also fascinating and varied — El Paso/Juarez and Tijuana/San Diego are very different places with different cultures. Then there’s the synergy — we tend to think of a border as something that separates two peoples, but it’s also what joins them together. So border culture — a distinct dialect, slang, food — is as unique as it is intriguing.

In some places, it’s hard to tell where one country leaves off and the other starts. For example, I listen to an American radio station on which the ads are all about Mexico. I can’t remember the last time I had a sandwich with bread — everything is wrapped in a tortilla. (Tortillas are an education unto themselves; each region in Mexico has its own style.) I guess the other reason I write about this area is because I live in it. It’s happening all around me.

I admire the way you switch between distinct tones in your books (not that Boone Daniels doesn’t deal with heavy stuff, but it’s generally lighter than what Keller and Barrera traffic in). How do you switch headspaces between books?

First of all, thanks. How do I switch headspaces? It’s not easy, particularly after books like The Power of the Dog and The Cartel. But life itself is varied, isn’t it? I can be on the border dealing with drug-trafficking issues, but in 20 minutes be on some beautiful beach immersed in the surf culture. They both exist in the same time and space. In terms of writing, it’s really a matter of language and style. Stories dictate their own language — you’d never write Dog in the same style as you’d approach Boone Daniels or Savages. So I have to listen to the characters’ voices, and that’s what flips the switch of headspaces. You mentally walk into a different room and turn on that light.

On that note, many of your characters — I’m thinking specifically about the population of The Power of the Dog — are broken, compromised, sometimes deranged, often amoral (in the best way, of course), but still remain people. How do you maintain that level of humanity while still managing to shock and sometimes horrify the reader?

No doubt, some of my characters do horrible things — all based, unfortunately, on actual events. But I can’t stand back and judge those characters objectively — I have to at least try to see the world through their eyes. Everyone has a point of view, everyone has a justification. I might not agree with them, I usually don’t, but I have to take the reader inside their heads. Otherwise, you’re just creating silhouettes — black, one-dimensional figures on a field of your own moral white purity.

The other issue is to give them histories. Everyone has a childhood, a background — there are often reasons why a human being becomes a monster. With the exception of flat-out sociopaths and psychopaths, most people walk to evil one step at a time. The first step makes the second step possible, and so on, until they get to the point where they’re capable of virtually anything. Sadly, that’s part of the human condition. That’s part of our humanity.

Have you ever worried about blowback from the border novels? Or worse, being approached by narcotraficantes who want you to write their story? (I live in Baltimore and heard rumors about things like that while “The Wire” was filming.)

Not really. I live pretty safely in the U.S., I’m not one of the real heroes — those Mexican journalists who lived in daily danger and were too often killed for trying to do their jobs. As for being approached to write their stories, well, I have, haven’t I?

How much time do you have? There are so many. I’m always sorry when I come to the end of a Jim Harrison book. I was sad when I finished Brown Dog because I just wanted to hang out with him more. I read Richard Ford’s Canada on a long flight the other week and was just amazed, as I was with The Sportswriter and Independence Day. I’ll pick up a Dennis Lehane novel and read a sentence or two at random to get inspired, as I will with Raymond Chandler. I always like to spend time with Lawrence Block’s Matt Scudder, and the late Robert Parker wrote so purely and cleanly. I recently reread Larry McMurtry’s novels set in Thalia, Texas.

A lot of writers say they’ll never adapt their own novels for film because it’s too difficult, or they’re too close to the material. What made you want to adapt Savages yourself? I understand the difficulty, but could also see how in some way it might almost be freeing, like you’re giving yourself license to go crazy with an editing-machete.

I like to tell film people that a thousand years before they were editing, we (prose writers) were editing. I was no stranger to machete-wielding even before I did a screenplay. But I get the thrust of your question. The characters in Savages had such a distinct voice that it was thought I should participate in the screenplay. I wouldn’t have done it, though, without my buddy Shane Salerno, an ace screenwriter and expert guide through the process. I’m not one of those novelists who looks down on screenwriting — it’s an extremely demanding and difficult art.

The issue that you mentioned about being too close to the material is a real thing — you have to acknowledge that books and film are two different, albeit related, cats, each with their specific needs. You want to stay faithful to the core and intent of the book — particularly the characters — but you have to adjust to the structural demands of a kinetic film. It’s not merely a matter of cutting — a lot of times, you’re creating new material. I don’t think one is “better” or “worse” — I think a book and a film can exist side by side.

Where’s your favorite spot to surf in San Diego? Are you a single fin or thruster kind of guy?

It all depends on the season and the swell, and there are so many breaks, but — Rockpile. Single fin.

Most important question last: Boone Daniels puts a lot of thought into his fish tacos. What’s the most important ingredient, and what’s your favorite recipe?

Not to be glib, but it’s the fish. Yellowfin — fresh — grilled, of course. (Not deep fried or breaded, for God’s sake.) A recipe? What’s a recipe? I grill the fish (I don’t do “blackened,” except by accident or neglect), wrap it in a warmed tortilla with some chopped raw onion and cabbage, maybe a little chopped tomato. I like to throw a little fresh cilantro on it. Maybe a dash of hot sauce. If I go a little crazy, I’ll make some mango and black bean salsa (don’t forget the jalapeño in there), but usually I keep it basic. You don’t want to kill the taste of the fish with a lot of extra junk. It’s already nature’s perfect food and a gift to humanity.

Nik Korpon is author of The Soul Standard (Dzanc 2016) and Stay God, Sweet Angel, among others. His fiction has appeared in Thuglit, Needle magazine, Shotgun Honey, and more. He lives in Baltimore.