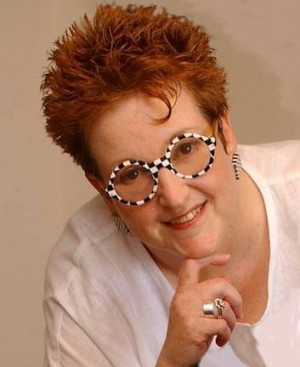 Alice Simpson’s debut novel, Ballroom, braids together the lives of six people, most of them strangers, who frequent a Manhattan ballroom in the 1990s, just before it closes forever. Twice-divorced Sarah is convinced she will finally find true romance; debonair Gabriel is a dazzling dancer but a troubled human being; elderly dance instructor Harry Korn is obsessed with Maria, the daughter of his building superintendent, who dances with her young partner, Angel Morez; and Joseph is yearning for marriage and children. Here, Simpson discusses her cast of characters and the art of writing.

You are an accomplished visual artist, and this novel began as a visual project. How did that happen? And is the cover art yours?

There’s an enchanting place in Maine, guaranteed to change the lives of those who cross the bridge to Deer Isle. It was the early 1990s when I was first accepted at Haystack Mountain School of Crafts. At residencies in this artists’ paradise over the next 13 years, I would explore untouched places of my creativity, making one-of-a-kind, hand-painted books, writing, and then sculpting in clay — finding new directions in my life.

Before attending Haystack, I had kept my creative nose to the grindstone as a designer and illustrator, pleasing clients and corporations. But as graphic design became more and more computerized, I felt less and less connected with the end product.

In a 1994 artist book workshop with the theme of “Place,” I chose the ballroom, which had become so much a part of my life. I had taken up dancing, studying fox trot, waltz, rumba, swing, and the tango. It seemed the perfect motif for my books. I found inspiration in the songs, dances, and people I observed on the dance floor. With a background in fashion illustration, I was able to incorporate paintings of figures — their movement, gesture, and costume.

Part of this hand-painted artist’s book, “Ballroom,” was five funky, two-page stories about some of the dancers. At the Writer’s Voice in New York, in the years that followed, I worked to more fully develop the characters. Those fictional stories grew and grew and soon the characters had apartments, families, yearnings — lives beyond the ballroom on Sunday night. It came as a surprise that, for someone like myself, relentlessly cheerful, the characters were dark and wounded. "Ballroom,” an artist's book, became Ballroom, a novel.

The elegant and expressive cover art is by Phillip Bannister (UK).

Your father was a fine dancer and a Vaudeville performer. What was he most known for?

My father, Hal Sherman (1897-1985), hung out at amateur houses and dance places as a youngster in South Boston, where black tap dancers taught him to dance. He began entering amateur talent shows at 13, winning contest after contest and soon decided, much to his Orthodox Jewish parents’ chagrin, to leave home and travel the burlesque circuit.

He went on to international renown as a rubber-legged “eccentric” dancer. In the 1920s and 1930s, he danced for royalty, and he and the Duke of Windsor often spent late hours at Maxim’s in Paris, dining and dancing with burlesque showgirls. He was quite the man in three-piece white linen suits, a gold-tipped cane, two Russian Borzois, and his own touring car. He is remembered for his starring Broadway role in “Hell-za-Poppin’” in the 1940s. I only saw him dance once at one of the last stage shows at the Palace Theater on Broadway.

There are several wonderful passages in your book about the transformative power of ballroom dance. One is from Sarah’s point of view: “When a man opens his arms to her and she steps into them, takes his lead, she feels she belongs, she’s important…Even Tony, paunchy and fat, his stupid toupee pasted on his head, makes her feel all of those things: a part of the dance, of something larger than herself.” Were those passages the easiest for you to write, or the hardest?

Admittedly, those passages were the easiest to write, as they express my own feelings when dancing with an experienced partner. In the balance of form and movement — each partner’s complete concentration on the other — there is perfection — being “one.”

While making art and writing, my “self” vanishes. The process is about vision. Dancing the tango, I am fully present, but without vision. Concentrating is different than thinking. Listening, not as an auditory experience, but as a physical experience. I focus on posture, arms, knees, feet, the length of stride, my core, and the frame formed between partners. Holding my own balance — aware of my center — yet submitting. It is a shared and complex experience.

There are two attempts made to take the magic home from the ballroom to the bedroom. Both end in disappointment. Do you think that is inevitable?

Shaped by their histories, it was inevitable that Sarah and Joseph’s attempt to come together would end in failure. They are programmed for disappointment. To Joseph, who has never known love, Sarah is an invention of his imagination. Sarah will inevitably be disillusioned as she searches for movie star romance. Gabriel, emotionally unavailable, sits upon tremendous hostility, to which only the reader is privy.

One sentence in particular made me think, “Wow! She really nailed this guy’s essential character.” It’s from the point of view of Gabriel, a wealthy man who married an artist he met in Greece, someone he has not allowed to practice her art, and she is now a joyless woman and a heavy drinker. “It seemed to Gabriel that she was ruining his life.” Have you known someone who was so completely self-centered who might have expressed such a thought out loud?

I do know people who blame others for their inability to have the lives they want and lack the ability to take responsibility for their own choices. I was challenged by Gabriel and Myra’s relationship; trying to understand why they stayed together — why she allowed him to dominate her. A psychologist told me that some dysfunctional relationships are like the infinity sign — an endless round-and-round dance in which partners know no other steps and therefore remain together.

The Waiting List, a psychological thriller about legacy set in New York during two periods — the Gilded Age and the present (periods not so dissimilar). It’s somewhat satirical, with wicked characters you will love to hate. “Flo” Ziegfeld, Diamond Jim Brady, the Dolly Sisters, and gorgeous chorus girls make cameo appearances. It’s about greed, obsession, and murder.

Susan Storer Clark is a former broadcast journalist, who wrote and reported for the Voice of America and WRC-TV in Washington, DC, where she won two Emmys for her work. She loves looking for the “sidebar stories” in history, the lives of ordinary people caught up in extraordinary events, and enjoyed the studies for her degrees in history from Rhodes College and from King’s College London. She is at work on her second novel, about an African woman taken as a prize by Francis Drake on his voyage around the world in 1577-78. She and her husband, Rich, recently moved to the Seattle area, where they are renovating an old farmhouse, and where Susan is learning to play the guitar properly.