An Interview with Alexandra Fuller

The renowned memoirist talks about her unconventional childhood, broken marriage, and the cost of being untrue to yourself. 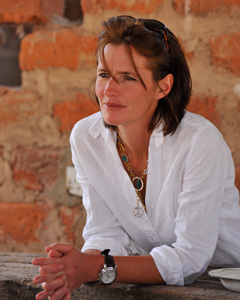 Currently ranked 10th on the New York Times bestseller list, Leaving Before the Rains Come is Alexandra Fuller’s third memoir. In it, she recounts both the demise of her marriage and the familial characteristics that make the Fullers so extraordinarily distinct and unassailably complex — living through wars, death, and madness against the demanding backdrop of Zimbabwe (then Rhodesia) and Zambia.

Fuller is two parts the acerbic wit of her parents, while trying to grapple with her half-African, half-American identity. Growing up amidst civil war, she came of age early. But, according to her father, she writes, that’s the way of the world. “‘The problem with most people,’ Dad said once, not necessarily implying that I counted as most people, but not discounting the possibility either, ‘is that they want to be alive for as long as possible without having any idea whatsoever how to live.’”

Enter Charlie Ross, an American river guide with Western-certified survival credentials and the ability to center chaos with calm. Alexandra feels she’s met her savior. Twenty years and three kids later, she discovers the savior within herself.

Your mother jokes that Charlie fell for your accent, and weren’t you lucky she taught you to enunciate properly. Do you think your mom uses a detached humor to account for all tragedies, but one that also gets right to the heart of the matter?

I do, actually. I think it’s a very British/Southern-African way of dealing with life. I think it’s healthy. When difficult things get pointed out, you laugh because it’s honest. We’re like a family of stand-up comedians — my mother, sister, and I — hopeless with laughter when we’re together. And we’re quite frank about disaster, whether it’s typhoid or the weather. But this is what makes my mother so compassionate and so much fun to write about. She has a real irreverent sense of humor, which we’ve both inherited.

Do you think Charlie fell for your chaotic lifestyle in the same way you fell for his “unflappable” demeanor?

In a way, yes. I think cultures can be so different. I’m allergic to the idea of a divorce memoir, so I tried to make this story more about the differences in cultures and realities vs. just two people’s irreconcilable disparities. I married into the dominant culture, which can afford to be unflappable when you have the whole of America backing you up. Our cultures glided past each other in a way that they could never truly connect.

At the same time, we assume certain classifications based on our surroundings. If you asked my father what it’s like to be a white Zambian, he’d say, “I don’t know, you’ll have to ask one.” In other words, he’s removed all labels from himself. Which is a hard thing to do in any culture.

You run into a local shopkeeper on a trip back to Zambia who tells you your father is the most famous man in 500 miles, and you’re shocked. He goes on to tell you about a civic side to your father you weren’t aware of, where you respond, “I’m not sure he’s ever been an angel of mercy to me.” The shopkeeper replies, “Then you must not have had a catastrophe yet.” What did you make of the way the locals saw your father?

Recently, my sister sent me a photograph of a man doing something incredibly sweet, but simple, like holding a door for someone, and she said, “Oh, this reminds me of Dad.” I guess I knew he was well regarded, and I could see it on a personal level. But parents seem to disappear from your sight when you’re not with them, where your children are always in your mind, whether they’re physically present or not. I guess, up until that moment, I had never considered how it felt for the rest of the world to be around my parents, or my dad. He’s a bon vivant, no question.

In previous books, you paint a picture of divided lives between you and your sister, Van. Here, you call her your protector, and despite your opposing characters, almost declare your sisterly love as one of the strongest loves in your life. What has Van’s adult life been like since she stayed in Africa near your parents, while you moved to America?

I think that’s a whole other book. I’ve been here as long as I’ve been there, and a lot of being over here has rubbed off on me. Everything has been more difficult for Van, but Zambia is her home. I have the luxury to write and make a living, while she isn’t afforded those same luxuries over there. Some of the most amazing literature has come out of the most tremendous odds and tragedies but, for her, it’s harder to get any distance from our lives or our past. Especially when you’re always dealing with the next thing that’s right in front of you.

In one part of the book, your friend says that, unlike anyone else, you are both sink and swim, fight and flight. What do you think he meant by that? Does it have to do with a childhood bred of fleeing crocodiles and guns?

Studies have been done that children of early trauma have a really strong response to it. I didn’t even experience the worst of civil war, but if you grow up in it, you have a fundamentally different outlook on what the world is like. Here, parents tell their children the world is a safe wonderful place. In war, your parents tell you the world is a really dangerous place, and here’s a gun and how to defend yourself. It’s a strong message to give a 6-year-old. Your alarm system is triggered so early, it becomes innate to have both characteristics — to sink and swim.

In this culture, there’s a real sense that kids should just be comfortable. But children who have been through a civil war are told people are dying for you and you better behave yourself — you have this huge sense of survivor’s guilt and responsibility outside yourself from very early on. These things affect kids in a profound way that they often can’t interpret until much later.

You developed a severe case of malaria after giving birth to your first child, and it was then that you simultaneously realized Charlie had perhaps fallen out of love with your situation (i.e., it was one thing for him to live in Africa as a river guide, but something else entirely to have the responsibility of raising a family there). Did you think moving to America would fix it?

It was confusing for me because now we had this family. The thing that was more important to me than anything was that we had a sensible plan for our child, and that was to go to Charlie’s homeland, not mine. I didn’t have a choice.

After a short time living in America, you realize how careless your parents may have been with your upbringing. The nagging thoughts in the back of your mind were being somewhat supported by the sterile, safe, organized way you saw people living in the U.S. Which way of life do you feel most naturally inclined toward?

Neither, really. I think the thing I want is whatever works. In other words, how are you most authentic and how do you protect everyone’s peace? I find myself constantly telling my children: Don’t mistake your comfort for security. We are addicted to all the ways that we can be numb in this culture — social media, television, drugs, anything not to be where you are — that frightens me a little bit.

This belief that we’re supposed to always be contented and free from pain or discomfort all the time. I remind them they aren’t entitled to every single thing that makes their lives convenient. I think it’s good for them to learn that early in life. I find the notion of having every need instantly met a bit troubling.

I think so, yes. Integrity for me is how when you think, how you speak, and how you act line up, and I’m better at that now. I still make mistakes and get reactive, but it’s so much easier to have that kind of integrity when the person you’re with doesn’t have a different idea of what that’s like.

I wouldn’t want to speak for him, but if you were to ask Charlie, I think he would agree. Neither of us had integrity, at least toward one another, in the course of our marriage. We hurt ourselves, along with each other by not being honest with our own needs. Unfaithfulness isn’t as simple as an affair in the established sense. It starts with being disloyal to oneself first, and then the other person.

You’ve been an activist for the unsustainable development practices that have wreaked havoc on your adopted home of Wyoming. Do you think in America we need too much?

Of course we do. I think that the American economy depends on the notion that we never have enough. I hope that for the future of our children, we wake up and say, “I’ve got enough, I’m all good.” It’s not going to happen because we’re human, but it’s a nice thought.

During the Climate Change Conference in Denmark, somebody looked at where we stand on the energy grid, and how much energy we can all use before we have a catastrophic outcome. Just waking up in the morning in America, I’ve already exceeded the daily amount. I’m constantly so aware of being part of the problem and trying to solve it at the same time. We have to try to line up more of what we do with what we say.

Back to your marriage. It seems from the narrative that Charlie was often never fully present emotionally. Is that accurate?

I think you could say that, or you could say I was over-present. I do try to make as much of a balanced idea of it as I can. From his perspective, I needed to mine every single thing we were feeling all the way down to the bottom. It’s a cultural thing — he comes from a reserved background, and my personal culture isn’t that way. Even though we’ve got British blood, we have wonderfully explosive ways of dealing with our emotion. We’re a very close family even though we’re wildly different.

Your love for Charlie was deep, but your lives had finally divided. I don’t want to give away your sage ending passages, but it seems as though, in the process of writing this book, you began to see yourself differently, more empowered and capable. Do you feel more at peace these days?

What is your next project, or have you not gotten that far yet?

I’m always writing. Something else will come along, but let’s get through this bit first.

Charles Shields' second in a series of articles featuring interviews with biographers and historians who will be appearing as part of the Chappell Great Lives Lecture Series at the University of Mary Washington in Fredericksburg, Virginia, January through April.