An Interview with Adriana Herrera 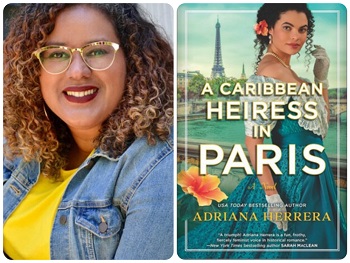 Adriana Herrera is an award-winning Afro-Caribbean author of contemporary romance whose new historical series, Las Léonas, launches in May with A Caribbean Heiress in Paris. Luz Alana Heith-Benzan, from Santo Domingo, is the gutsy heroine of the story, set during the Exposition Universelle in 1889. Luz visits the City of Light armed with 300 casks of her family’s rum, Caña Brava, determined to expand the business they built over three generations.

What made you choose to set A Caribbean Heiress in Paris during the Exposition Universelle? Was the alcohol trade particularly robust during that time?

I chose that setting because, while researching a family trip to Paris a few years ago, I came across an article mentioning that the Dominican Republic had been one of the countries exhibiting at the 1889 Exposition Universelle in Paris. After some Google searching, I found that another 12 Latin countries had been present at the fair, and that more than 5,000 Latinx presenters came to France that summer as part of the delegations. It was much too tempting of a setting to pass up.

While researching the exposition, I found a book that detailed all the products each country brought to France to present at the fair. The Dominican pavilion had rum as part of their exhibit, and I thought, “What if the rum distillery was run by a woman?” — which is how I came up with Luz Alana, my heroine.

At the time the book is set, there had been a decade-long infestation in Europe which devastated the grape crops in France, and in turn, drastically impacted brandy production, which made Scotch whisky very high in demand. I thought it would be interesting to give Luz Alana a counterpart who was in the business and as ambitious as she was. Evan Sinclair, the earl turned distiller, was the perfect match for her.

It would’ve taken great courage for Luz Alana, a woman of color, to do business anywhere in the late 19th century. Would her experience working among men be different in the Caribbean vs. Europe?

The big difference for Luz Alana would’ve been that at home she’d always had her father’s protection. Her father being a Scot and a wealthy man likely would’ve buffered her from those who didn’t want to do business with her. In Europe, there would’ve been prejudice, and she was there on her own. That complicated things, which was why she tried to be practical in capitalizing on the help she had available, like that offered to her by Evan.

You set your story in a diverse period often overlooked — or deliberately misrepresented — in historical romance. What would Luz Alana and the Scottish Earl of Darnick’s experience as a multiracial couple have been like in late-19th-century Europe?

I know it was not the case in the United States or Britain, but in the Caribbean and other parts of Europe, interracial couples were not uncommon. Even in the U.S. and the U.K., they weren’t unheard of. As far as a romance is concerned, it’s all about context and the kind of worldview that the characters in the story have. For Luz Alana, whose parents were an interracial couple, and for Evan, whose uncle married a Black Jamaican woman, those kinds of unions were not unusual. It’s the same as an author writing about a governess marrying a duke in Regency [romance]. That’s something that’s never happened, but it could have. A woman of color marrying an earl is absolutely plausible in a romance.

How has your role as a trauma therapist working with survivors of domestic and sexual violence informed your writing?

My work always informs on how I write [about issues surrounding] consent, and that drives me to really dig deep into my characters’ backstories and histories.

What was the impetus behind co-creating the PoC Queer Romance Authors Community?

In the beginning, we just wanted to create a centralized place where BIPOC authors writing queer romance could be listed, where they could talk about their work, and where readers could find them. Even in the four years since we’ve created the collective, things have changed for the better. There are many more authors being traditionally published, and I think that will only increase. My hope is that it will continue to be a resource, and that at some point, there are so many of us with visibility that it won’t be necessary.

Who are your creative influences?

I grew up in the Dominican Republic. I left when I was 23, so Latinx authors were a big influence for me. Gabriel García Márquez, in particular, was enormously influential. Although he didn’t write about the Dominican Republic, he wrote about the Caribbean coast of Colombia, which was the first time I read a setting that felt like my own world. I also loved Isabel Allende and Laura Esquivel. In terms of non-Latinx authors, Edith Wharton is probably my favorite. The Age of Innocence is my favorite book of all time, and I go back to it again and again. In terms of romance, my introduction to the genre was historical. I gobbled up all those old-school bodice rippers! Johanna Lindsey, Julie Garwood, Judith McNaught — those were my gateways to romance.

What do you read for pleasure?

I read everything. I’d say my reading these days is one-third nonfiction (historical nonfiction and memoirs mostly) [and] one-third romance — historical, sci-fi, and fantasy. The last third of my reading is mysteries and thrillers. Recently, I have been re-reading all of Agatha Christie’s oeuvre, which has been quite delightful.