Discovering the works of Annie Ernaux. 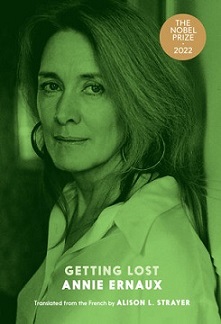 Until she won the 2022 Nobel Prize for Literature, I had never heard of Annie Ernaux. But I’ve been catching up and comparing notes with others ever since. So far, I’ve read just three of her autobiographical novels translated from the French by Alison L. Strayer. They are taut, deeply personal explorations of class, sexual obsession, and the changing self.

The first book I managed to find — initially, not many titles were available — was Getting Lost. It’s a diary in which Ernaux chronicles her affair with a Soviet diplomat.

Let me just say I thought I was obsessive, which explains why I found her fixation on this man so disquieting. I recognized it, at first. But as I continued reading, I was appalled by its depths, by how her obsession erased her. That’s what obsession does, I realize now. It erases you.

Her lover, known only as S, seems a curious choice for her. He enjoys Western luxuries such as expensive cars and designer clothes. He has no intellectual curiosity. His grandfather was decorated by Stalin. But Ernaux loves his Soviet-ness. At one point, she compares him to a young Boris Yeltsin. She wonders if he’s cheating on her.

As I read, I kept recalling Shakespeare’s words, “Love is merely a madness.” Reading this book was a journey into someone else’s madness. She waits for his intermittent phone calls to tell her he’s on his way, driving recklessly to her home (he’s quite the heavy drinker) for stolen hours of torrid sex. After he leaves, she obsesses until their next encounter. Some of her details are hard to forget. When they have sex, he never takes his socks off. At one point, she loses a contact lens and finds it on his penis.

At the height of their affair, she writes of “a strange, almost mystical night, when physical love provoked unfamiliar sensation, perhaps similar to those which drugs produce. First of all, my arms and legs are terribly heavy, as if crushed by a truck or blocks of earth…my whole body is buried, or rather flattened against the earth, the sky, whatever — the world. I’m united with something huge, as if I were myself enlarged, flat and heavy, but with happiness.”

She compares her obsession to the process of writing: “the loss of self, the experience of emptiness being filled.”

Her lover is in France on diplomatic assignment, so she dreads his inevitable departure. But as her reader, I longed for it. I wanted her to get her life back and, with it, a fuller sense of her value. I wanted her to get a grip. Only, who was the self I hoped she’d recover? In order to find out more, I went to my favorite bookstore and picked up two more Ernaux titles.

A friend in the shop asked me if Ernaux’s writing resembled Karl Ove Knausgaard’s My Struggle. I’d read all seven volumes several years back and could see why she wondered. Those books were a deep dive into the exposed self, without shame. Reading them almost became the act of questioning shame.

Knausgaard is a compulsive writer, and My Struggle runs close to 4,000 pages. By contrast, Ernaux’s books are spare but no less revelatory. Simple Passion is even slenderer than Getting Lost and also more insightful. It is a memoir based on — you guessed it — the same affair with that Soviet diplomat. But toward the end of Simple Passion, Ernaux makes an extraordinary statement:

“Whether or not he was ‘worth it’ is of no consequence. And the fact that all this is gradually slipping away from me, as if it concerned another woman, does not change this one truth: thanks to him, I was able to approach the frontier separating me from others, to the extent of actually believing that I could sometimes cross over it. I discovered what people are capable of, in other words, anything: sublime or deadly desires, lack of dignity, attitudes and beliefs I had found absurd in others until I myself turned to them.”

The final book I read was A Girl’s Story, another exploration of shame and its absence, as well as of Ernaux’s shifting sense of self. She was raped at 17 while working at a children’s summer camp. At the time, she endowed this experience with romantic qualities it manifestly lacked. “Her need to give him mastery of her body makes her a stranger to any sense of dignity,” Ernaux writes.

She describes the crushing taunts and indignities she endured both at the hands of the rapist and from the wider camp community. Because of her class, she was treated with contempt. But when she steps back into the mind of that 17-year-old self, she can’t remember caring about the mistreatment. “I see nothing from that period that could be described as shame.”

In writing A Girl’s Story, Ernaux alternately uses first and third person so that, as she sits down to write, she merges with her younger self, “not constructing a fictional character but deconstructing the girl I was.” That girl is now a stranger to her, but one who has imparted memories to the woman and the writer. In effect, Ernaux has become the girl’s ghost.

A Girl’s Story reveals how Ernaux constructed a narrative to align with the identity she imagined for herself back then. Maybe we all do this to some extent. But who is the true self? Do we even have one?

“What counts is not the things that happen, but what we do with them,” Ernaux writes. At one stage, she finds a photograph online of the man who raped her all those years ago. He’s now a grandfather surrounded by an adoring extended family. She reflects on the enormous imbalance between his impact on her and hers on him.

“It is the absence of meaning in what one lives,” she concludes, “the moment one lives it, which multiplies the possibilities of writing.”