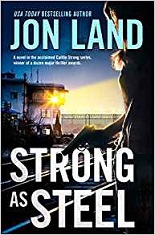 And, this time, the mission is personal.

Fifth-generation Texas Ranger Strong didn’t expect what awaited her when she served a warrant on a downtown Dallas private-intelligence company. Why would the raid on a computer-geek squad end in mass carnage?

The trail leads Strong to a remote location in the Sonora Desert, where bodies are buried along with something even more mysterious. As the investigation unfolds, it becomes clear that the case is linked to one worked 25 years earlier by her father and her mentor.

In 1994, contraband runners died mysteriously while transporting three boxes to the Mexican drug-cartel queen Luna Diaz Delgado; whoever stole them hid them well. Now it appears they were buried in the desert and someone has dug them up. But who?

And what in those boxes is important enough for murder? What inside kills anyone who opens them within 30 seconds? Is it a curse, as some believe, or something even more sinister and volatile?

Strong, along with Cort Wesley Masters — a former hired-gun and now her lover — and retired Mexican army colonel Guillermo Paz, follows a string of clues that connects the present to her father’s world in 1994.

This south-of-the-border Da Vinci Code-style thriller with action on every page will have you trying to unravel the mystery of the boxes and the link between Christianity and the brutality of a Mexican drug queen.

I recently chatted with author Land about Strong and the series.

How did the creation of such a strong female protagonist come about?

Caitlin Strong was born at a marketing meeting where [publisher] Forge’s head of mass-market sales noted that although thrillers were the most popular genre, and most books are bought by women, there weren’t any traditional thriller heroines (like a female Jack Reacher who could go toe-to-toe with tough guys and hold her own). Since women can’t serve in combat as Navy SEALs or Army Special Forces, I suggested a Texas Ranger. The rest is history.

What has learning about the Texas Rangers been like?

Researching the history of the Texas Rangers has been a blast because there’s much folklore, legend, and mythology associated with them. Rangers are revered not just as legends of the Old West, but also of the New West.

It was a retired Texas Ranger who tracked down and killed Bonnie and Clyde when everyone else had failed. When oil boomtowns of the 1930s needed taming, it was lone Rangers who rode in and tamed them.

In more modern times, it was the Rangers who defused prison riots or hostage situations, often without bloodshed or gunplay. What amazes me the most is that the Texas Rangers — founded in 1823 — are as admired and respected now as they were 200 years ago.

When I started the series, there wasn’t a lot of information available about women’s roles in the Rangers. I created Strong not so much as a prototype but as an anomaly, a woman thriving in a male-oriented world. She’s a female gunfighter whose mentality is a throwback to those heroes of lore and every bit equal to them. I didn’t want to let myself become a prisoner of the fact that there was so little of a female Ranger’s history upon which to rely.

Strong always works on the right side of the law, but her methods are not always ethical. How do you explain her contradictions?

Strong is an anachronism. The values that define her are rooted in a past she cannot escape, and she doesn’t want to. She believes her approach to justice is the right one — a lone wolf treating the contemporary world no differently from the frontier that spawned her ancestors.

Like many in both fact and fiction, some of her greatest strengths also define her greatest flaws. Life for Strong is a balancing act, a push-and-pull between the gunfighter she was born to be and the maternal instincts revealed in her relationship with the teenage sons of her outlaw lover, Cort Wesley Masters.

One of my favorite scenes in the series is the opening of Strong Rain Falling (Book 5), when she takes Cort Wesley’s oldest son, Dylan, to visit colleges. While there, she’s involved in a gunfight, perfectly articulating the dueling sides of her nature.

I believe in the wisdom of the film mogul Jack Warner, who once said, “If you want to send a message, use Western Union.” I think it’s pretentious for a writer of commercial fiction — a storyteller — to try to do anything more than tell a great story and provide hours of reading entertainment. What I want readers to take away from this book is an overwhelming desire to read the next one in the series, or a previous one they might have missed. That’s the way I feel about my favorite authors, and I can think of no greater compliment than to have readers yearn for more.

To a large degree, the fun of the Caitlin Strong books is that anyone who reads one will probably come away with a different perspective than the person next to them reading the same book.

Can you tell us something about the next book in the series?

The next book is Strong From the Heart, and it’s a classic thriller from beginning to end. It deals with the opioid crisis and opens (spoiler alert) with Cort Wesley’s younger son overdosing. All my Caitlin Strong books have both a structural core and an emotional core. Those two things always complement each other well, but in Strong From the Heart, they’re virtually seamless. This allows the characters to react, and at times overreact, as they become prisoners of their own emotions. This is the theme that runs through all the Caitlin Strong titles.

Here are a few fun facts fans might not know about Jon Land.

It’s time for a shout-out to Mrs. Claus.