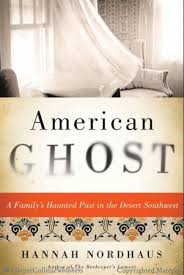 In American Ghost: A Family’s Haunted Past in the Desert Southwest (HarperCollins), Hannah Nordhaus writes a detective story, although it’s not fiction, and a ghost story, although it’s not a chiller. It’s biography and history and the product of investigative research, yet everything of power, even scholarly process, must come from the heart, and so does this story.

The author embarks on a new experience, chasing the life of her deceased great-great-grandmother, who became broken and was called insane after the mysterious death of her child (seven children remained). Generations later, that grandmother, Julia Schuster Staab, haunted the premises of the family’s surrounds in New Mexico and the imagination and curiosity of Nordhaus.

“It is clear that Julia was unwell, and that her problem was gynecological. But this tells us little about her suffering because in the nineteenth century, nearly everything involving female health was considered gynecological. An 1893 clinical book described female mental illness as ‘the reflex effects of utero-ovarian irritation.’”

Along with Julia’s illnesses, treatments, surgery, therapeutic journeys, and rest cures, we’re introduced to the culture of the land where she lived, the result of Jewish immigration to the southwest, 19th-century mores, and the indigenous world of the developing territory. Julia’s husband, Abraham, is a successful business man and, through him, we watch the rise of mercantilism and a growing society in New Mexico.

“There is Abraham who raised a proud American family and helped build an American city and there was the Abraham who served only himself; there is the Julia who lived in the world, and the ghost woman who lives in our minds.”

Nordhaus, the writer, is the main character here and someone who engages us from the first. The quest for the mythic Julia takes us through genealogy, family visits, anecdotes, spiritualists, psychics, and time with Ghostbusters.

The synergy of these elements is a test of analytical and emotive skill. The premise of the book is to connect and identify an ancestor on the invisible side of the veil — reality coalescing with the other dimension.

Imbedded stories within stories come from Nordhaus meeting descendants, each with a piece of the puzzle. Nordhaus also visits psychics. One named Juli sees Julia growing “weaker and weaker with each child…and yet there were all these expectations on her…I’m seeing her up in her bedroom…brushing her hair…She’s being pressured to entertain guests, and she breaks. She comes down the stairs in her nightgown, looking very ragged…She comes down and thinks she’s hosting all these people.”

The quest takes the author around the country for two years; to Europe, visiting relatives and offspring, reading documents, diaries, and letters; and visiting the German origins of Julia’s ancestry. Nordhaus is scientific and depends on what’s observed to tell her story. We trust her literary leadership.

In the chapter “Jonathan,” we meet the concierge of Julia’s family home, La Posada. He was a sensitive man in his 60s. “Only once did Jonathan see Julia’s face…He walked up the stairs…‘there she was, standing in the corner wearing a Victorian cloak. Her hair was pure white.’”

Julia told Jonathan about Abraham. He had many lovers, and she could do nothing about this, so the children became her only life.

Nordhaus considers all probabilities. She finally experiences spending a night of her own in the Julia Staab room in La Posada, now a hotel. Through a nervous sleep, she experiences certain phenomena and a brief vision of lights with no known origin.

Finally, Nordhaus visits Judith. ”She talked to spirits using an L-shaped divining rod — she was a dowser.”

After an extensive session, Judith says Julia was glad her story was being told — “she wants peace…She wants to go where Abraham is, and her children. She’s asking, will you please take me home.” Julia was begging now. At the end of the session with Judith, through prayer, the psychic saw Julia no longer earthbound.

Hannah Nordhaus has a singular ability to keep us tracking her as she burrows for answers and finds new knowledge. This is a book intoxicated by the past and stimulated by devotion to family.

Grace Cavalieri received the inaugural Lifetime Achievement Award from the Washington Independent Review of Books on April 25, 2015, during the Washington Writers Conference. Her new book is a memoir, Life upon the Wicked Stage.