I Hear America Reading: A Fourth of July Ode

A literary reflection on Independence Day by Martha Toll. 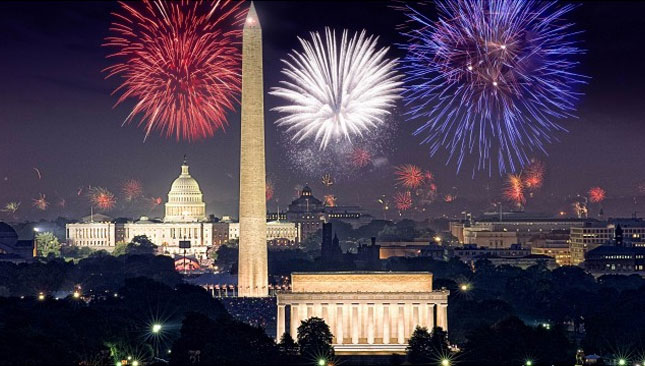 July Fourth denotes summer in America; the apex of family road trips, outdoor soundstages and backyard barbecues that arc between Memorial Day and Labor Day. As we celebrate Independence Day, we need to remind ourselves of the infinity of experience behind it — the compelling mix of painful struggle and triumphant reinvention that makes us uniquely us.

So too, our songs. We recite our iconic liturgy, but what are we singing about? Every lyric hides a sprawling literature of rooted place and bloody expansion; of unforgivable bondage and unstable, confrontational deliverance. We sing of grinding poverty and unfathomable wealth; of spreading oppression and joyful redemption; of excruciating prejudice and astonishing generosity. We glorify war and sue for peace. We ignore the suffering and tend our wounded. Looking outward, we blind ourselves to the impact of our forward thrusts; looking inward, we are mired in conflict. Feeling despondent, we find hope; withstanding unendurable hardship, we champion our future.

Through it all we read, and of course, we write.

We are our songs.

Oh, say, can you see, by the dawn’s early light,
What so proudly we hail’d at the twilight’s last gleaming?
Whose broad stripes and bright stars, thro’ the perilous fight,
O’er the ramparts we watch’d, were so gallantly streaming?

What price gallantry? Take an adolescent’s walk through the horrors of Gettysburg in search of his father in Coal Black Horse (Robert Olmstead). Sweat the mosquito-ridden swamps of World War II’s Pacific Theater in The Naked and the Dead (Norman Mailer). Mine Vietnam’s fallout in The Things They Carried (Tim O’Brien) and the scars of the Iraq war in The Yellow Birds (Kevin Powers).

And the rockets’ red glare, the bombs bursting in air,
Gave proof thro’ the night that our flag was still there.
O say, does that star-spangled banner yet wave
O’er the land of the free and the home of the brave?

That star-spangled banner may yet wave but just how free are we? Dive into the intolerable conditions we have tolerated post-slavery in The Warmth of Other Suns (Isabel Wilkerson). Discover the legacy of interning Japanese Americans during World War II in The Buddha in the Attic (Julie Otsuka). Read Tortilla Coast (T.C. Boyle) to experience the life of an undocumented Mexican in Los Angeles, and Rubyfruit Jungle (Rita Mae Brown) to explore coming up lesbian in Florida.

And still, we sing.

O beautiful for spacious skies,
For amber waves of grain,
For purple mountain majesties
Above the fruited plain!

We inhabit a vast and magnificent place. Engulf yourself in Washington State’s panoramas in East of the Mountains (David Guterson) and the expanse of the Oregon Trail in A Sudden Country (Karen Fisher). Share an Iowa childhood during the Great Depression in Little Heathens (Mildred Armstrong Kalish) and trail the Navajos squeezed between the Spaniards’ northern push from Mexico and America’s Southwestern conquest in Blood and Thunder (Hampton Sides).

Who are we? Are we a nation of immigrants or a continent filled with Americans? Or are we much more? Experience post 9/11 Chicago through an Egyptian’s eyes in Chicago (Alaa Al Aswany) and witness AIDS in east Tennessee with an Indian doctor raised in Ethiopia in My Own Country (Abraham Verghese). Follow a family’s wrenching migration west from the Oklahoma Panhandle during the Great Depression in Whose Names Are Unknown (Sanora Babb) and join another family saga that begins when a Union soldier marries a former slave in In The Fall (Jeffrey Lent). Fight to raise children in poor black, 20th-century Philadelphia in The Twelve Tribes of Hattie (Ayana Mathis) and embrace three wild, hurting, lovable brothers in upstate New York in We the Animals (Justin Torres).

God shed his grace on thee

We are God-fearing and secular, religious and hedonist. Delve into a contemporary conversion to Catholicism in What Happened to Sophie Wilder (Christopher Beha) and join the Jesuits in A Long Retreat: In Search of a Religious Life (Andrew Krivak). Check out the Big Easy’s secular Jewish community in Lives of Saints(Nancy Lemann) and study Mormonism’s western journey in The Gathering of Zion: The Story of the Mormon Trail (Wallace Stegner).

And crown thy good with brotherhood
From sea to shining sea!

Canoe the majesty of the Pacific coast from Alaska to Oregon in a gripping tale of escape from indentured servitude in The Sea Runners (Ivan Doig) and immerse yourself in a domestic drama that unspools from Cape Code to Maine in The May Trees (Annie Dillard).

Whatever you do, please sing along, read along. This land is your land.

Martha Anne Toll is executive director of the Butler Family Fund, a nationwide philanthropy focused on ending homelessness and the death penalty. She has been featured as a book commentator on NPR and is represented for her debut novel.