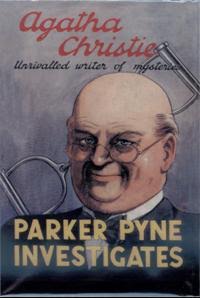 The Center for the Arts at George Mason University recently hosted the Aquila Theatre production of Agatha Christie’s Murder on the Nile, and Mason’s Faculty Arts Club invited me to give an after-performance talk about some aspect of the story, of Christie’s work generally, or of the Golden Age of Mysteries. While the latter might have been easier — I generally teach a section about the Golden Age in my lit courses at Mason — I ended up diving more deeply into this specific work instead, ultimately learning a little something myself.

Many people know Christie’s 1937 novel, Death on the Nile, or the star-studded 1978 film adaptation with Peter Ustinov’s first outing as Poirot or, more recently, the Masterpiece Mystery version with David Suchet. But no one in the group at the post-show chat had read Christie’s original 1934 “Death on the Nile,” a short story featuring one of her lesser-known detectives, Parker Pyne.

A retired government statistician, Parker Pyne specializes in matters of the heart. His ad in the personals reads “Are you happy? If not, consult Mr. Parker Pyne, 17 Richmond Street,” and in his first outing, “The Case of the Middle-Aged Wife,” he counsels a woman worried about a wandering husband and promises to restore her happiness — whether marital or personal, he doesn’t specify, but he gets the job done.

(All of the Parker Pyne stories were most recently collected in Masterpieces in Miniature, which also includes the complete tales of Christie’s Harley Quin as well as a sprinkling of Poirot and Marple stories.)

In “Death on the Nile,” Parker Pyne finds himself navigating not just the river of the title but also the various romantic entanglements of a rich woman’s entourage: her husband, nurse, niece, and secretary. Several of these characters were reworked in the novel, but it’s a key shift that’s worth focusing on.

In the first volume of his two-part study of Agatha Christie’s Secret Notebooks, John Curran discovered that Poirot was originally considered for the short story — not surprising perhaps, given that a couple of other Parker Pyne stories actually featured Poirot in their original magazine publications.

More surprising, as the notebooks reveal: The character list for the novel Death on the Nile originally featured Miss Marple as the detective.

So is the lesson that plot is all that matters, and one detective is as good as another? Or maybe no detective is needed at all, since Christie had eliminated Poirot completely when she adapted the novel for the stage.

Rereading the novel Death on the Nile for the first time in many years, I was struck by how Poirot, as much as a detective, serves as an advisor and confessor, couples counselor, and even match-maker (not unlike Parker Pyne in each respect) —  and it’s fascinating that the most Poirot-like figure in the stage adaptation is a clergyman, focused on questions of sin and evil, responsibility and redemption.

Throughout each, the most powerful scenes aren’t about figuring out the clues but on the mysteries whirling around the central “figure of a jilted young woman, unforgiving, vindictive and passionate and the question of just how far her unleashed malevolence will take her,” as critic Merja Makinen has described it.

Bigger perspective? Death on the Nile — story, novel, stage adaptation — may mark early steps toward Christie’s “deeper interest in character” in the 1940s, as Curran describes it, with “less emphasis on footprints and fingerprints, diagram and floor plans, and initialled handkerchiefs and red kimonos” as “the detective plot moves further backstage.”

Certainly, Poirot and Miss Marple had plenty of detecting adventures still ahead, but this story in its various incarnations may chart in microcosm some of the small shifts in Christie’s work — perhaps best described by Dame Agatha herself in 1946: “I have become more interested as the years go on in the preliminaries of crime,” she said. “The interplay of character upon character, the deep smouldering resentments and dissatisfactions that do not always come to the surface but which may suddenly explode into violence.”

Death on the Nile may be a masterpiece of mystery, but it’s also a penetrating character study, as interested in human nature and the factors that lead up to a crime as in the clues that ultimately help solve it.

Last week, Malice Domestic — a mystery conference hosted annually in Bethesda — announced the finalists for this year’s Agatha Awards, and three authors with ties to our area (myself included!) were among the finalists for this year’s award for Best Short Story. Barb Goffman, B.K. Stevens, and I are members of the local chapters of Mystery Writers of America and Sisters in Crime, and we’ve all provided links to our nominated stories here (all but one free):

The winners will be announced at the Agatha Awards banquet on Saturday evening, April 29. Best wishes to all the finalists — and happy reading in the meantime!

Art Taylor is the author of On the Road with Del & Louise, winner of the Agatha Award for Best First Novel. He’s an associate professor in the English Department at George Mason University.

The un-scratchable itch of book collecting...