The nerd, the poet, and the ritual object 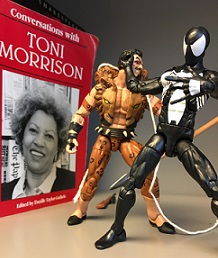 Recently, near the end of the semester, some petty theft occurred on my floor at the University of Baltimore. Being relaxed and naïve, I’d left my office door unlocked since the classroom was just around the corner, and someone chose to steal my black suit — or symbiote suit, if you’re in the know — Spider-Man Marvel Legends figure.

The admin desk, which is about five feet from my office, also had a small Piccolo Dragon Ball Z figure stolen. Of course, I was anxious, wondering what else was taken and kicking myself for my lax attitude. But I also had to laugh that the only things missing were toys.

I realized later how much such small totems mean to me, and how much I use them to relax my imagination when I’m stuck on where to take a poem or how to form an interesting idiom. I often work in my office because of the opportunity for uninterrupted time. Yet, I need to “interrupt” the puritanical “work ethic” from time to time to allow new ideas to form in the subconscious.

In the larger nerd culture, most folks are aware of the rise of Pop Vinyl figures, with their oversized heads and distinctive white eyes. Nearly every entity in pop culture, from comic-book heroes to “Stranger Things” characters, to well-known personalities like Mr. Rogers, has a Pop figure in their likeness.

Certainly, ritual objects and images are just as important to poets, writers, and visual artists. Consider the ekphrastic work done by Adrienne Rich in her poem “The Photograph of the Unmade Bed,” based on the famous 1957 photo by Imogen Cunningham, “The Unmade Bed.”

In the poem, the points of departure, the hairpins that center the photograph, transform into many other objects of ritual and significance until the reader must account for the way we’ve come to observe and be observed by the world.

in a flash I understand
How poems are unlike photographs

for our uses of it
it is intentionless

A long strand of dark hair
in the washbasin

is innocent and yet
such things have done harm

My parents divorced when I was 5 years old, and I have few, if any, memories of my father, mother, brother, and me all living in the same house. What I do have are photographs, the majority of which are images of my brother and me opening Christmas presents and a halo of new toys surrounding us. Two boys, mouths agape with unbridled laughter and anticipation, hoisting Lion-O and other Thundercat figures to the sky like the Sword of Omens. I know we repeated that ritual many times.

I’ve often heard the poet and novelist Chris Abani speak about the idea of an artifact in a poem. The short version is that some poems revolve around a ritual object, and when a writer is in the early stages of revision, looking for what that artifact might be can be a method of understanding the soul of the poem.

Such is true for many nerds, as well. Perhaps there is a Pop Vinyl figure at the heart of our discourse, an oversized head and a stylized body. Perhaps our imagination needs to pull towards the tangible world, and toys allow for the portals of play and work to open more fully.

Karl Shapiro, after all, said that the work of the poet is to make the poem as “close to the earth” as possible, instead of abstracting into the realm of philosophers.

The Ballroom of the First Draft

What Jane Austen has to say about dancing with your own work.