A Story from the Struggle 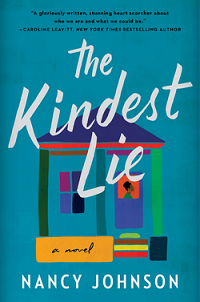 Nancy Johnson’s eloquently written, introspective, and emotionally resonant debut novel, The Kindest Lie, is a timely commentary on social justice, race relations, and what it means to be Black in today’s America.

Ruth Shaw struggles to accept her past while trying to embrace her present. Growing up poor in a small auto-factory town in Indiana — “a town that killed dreams before they took root” — Ruth’s greatest wish was to overcome poverty and leave her hometown behind.

She’d disappointed her family, and herself, by giving birth at 17. Her grandmother then arranged for her son’s adoption. It was a secret she buried way down deep, and she “protected the lie of her past at all costs,” telling no one, not even her husband.

Now a successful chemical engineer and married to Xavier, a VP at PepsiCo, she has everything. And with Obama the newly elected president, her hopes have wings: “With a brother on his way to the White House, they had state-sanctioned permission to dream.”

Ruth and Xavier’s prosperity allows them to buy a townhome in Bronzeville, “the Black Metropolis,” on Chicago’s South Side, a community rich in African American history. Living both in luxury and within earshot of gunfire, they’ve proven they haven’t totally sold out:

“Somehow, Black people had re-engineered gentrification there — rehabbing houses, stimulating the economy, and turning the place into their own mecca. The neighborhood reminded her of herself, a process of tearing down and building back up, making something out of nothing.”

Ruth remembers what it was like to grow up poor and less-than. “It had taken her years for her to love her own dark skin, almost the color of their shiny new walnut hardwood floors.” Now that she’s made it, she should feel satisfied and accomplished, but her “feet remained stuck in the quicksand of her past. How could she enjoy that kind of ease when she carried something so heavy?” — abandoning motherhood for a Yale education.

“Every day I walk around this house like I belong here. But inside, I’m that poor pregnant Black girl from Ganton, Indiana.”

Ruth’s fear of defeat fuels her yearning for prosperity. “When you came from where Ruth did, you knew what the bottom looked like, and you couldn’t slip and fall back there again.”

When Xavier presses her for children, the guilt and grief of giving up her son overtake her. She’d always told herself that “a lie could be kind if you wanted it to be, if you let it,” but she now realizes that belief was itself a lie.

So Ruth resolves to find the son she gave up.

Returning to Ganton, she visits the only person she’s close to other than her grandmother and brother — a white woman named Lena — to gain strength to get her through the visit with her family. At Lena’s small store, Ruth meets Lena’s grandson Patrick, nicknamed Midnight by the Black kids in town because he was “the little white boy who acted Black.” He is about her son’s age.

What started as a chance encounter between Ruth and Midnight blossoms into a relationship based on mutual need and an unexpected link to her son.

As Ruth searches for her child, she discovers she’s not the only one in her family with secrets. Her journey takes her from the guilt of a long-ago mistake to the discovery that everyone needs forgiveness, even herself. And she realizes that “a lifetime of lies never added up to anything good. A lifetime of doing the wrong things for the right reasons. A lifetime of lies that started small, like a nick in the windshield, then eventually shattered the glass.”

With subtle details as rich as they are emotionally resonant, author Johnson takes readers into Ruth’s intimate struggle to find peace and come to terms with being an imperfect mother. The Kindest Lie is a visceral depiction of being Black in America, the quest for understanding and acceptance, the struggles of motherhood, and the strength of family amid the backdrop of a racially divided country.

“You just don’t understand,” is a phrase repeated by the Black community to the white, and rightfully so. Hopefully, after reading The Kindest Lie, you will begin to understand.