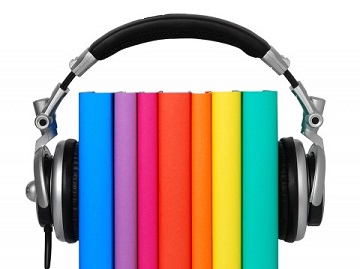 I expect that most folks who listen to audiobooks here in the DC area do so to soften those tedious commutes — especially with the latest news that we top the nation in worst congestion overall.

My own commute these days is a mere three miles (don’t hate!), but I used to be a big fan of audiobooks for long trips from Northern Virginia back to my home state of North Carolina, and I remember sitting in the dark in the driveway of my parents’ house, pretending I wasn’t home yet because I was in the middle of a tense scene from Toni Morrison’s The Bluest Eye — just a few minutes more!

Audiobooks help busy folks find time to read and distract readers from boring drives in a positive way, but to my mind, their value also transcends that. Listening to all — all — of Morrison’s books (even the ones I’d already read) not only helped pass the miles, but also brought me into the complex cadences of her prose in ways I’d not fully felt seeing the sentences on the page.

And the same is true of William Kennedy’s Ironweed and Ian McEwan’s Atonement and a score of other books. Having each word enunciated caused me to slow down and hear the prose in fresh ways.

I wrote above that I “used to be a big fan,” because I don’t listen to audiobooks anymore — not with a 3-year-old in the back seat watching “Fireman Sam” and “Postman Pat” and “Curious George” at full volume most trips. But reading aloud is still part of my wife’s and my usual routine — something that the students in the back row of my classes at George Mason usually snicker about if I mention.

This idea of reading aloud recreationally started for me back during dinners with friends Kyle Semmel and Pia Moller — with Kyle’s prompting to bring a story to read after dinner. And the routine hit full stride later when my wife, Tara, and I saw and enjoyed the first of the Robert Downey Jr. Sherlock Holmes movies. Walking out of the theater, Tara remarked, in a wholly innocent way, something like, “I should read a Sherlock Holmes story someday.”

That sound you hear is the echo, even these many years later, of my jaw dropping.

After the shock wore off, I offered to read one aloud sometime — and then another — and then, ultimately, all 56 stories and all four novels, a project that not only immersed us in the full canon, but also exposed us to Conan Doyle’s stylistic habits. We can’t hear the word “singular” these days without thinking Holmes, for example, so often does it turn up in the stories.

Other authors and books have gotten similar treatment here in the Taylor-Laskowski household, including Wilkie Collins’ The Woman in White, all of Stanley Ellin’s stories (such a careful prose stylist), the range of tales in the recent Black Lizard Big Book of Locked-Room Mysteries, and right now a fresh addition to the nightstand, C. Daly King’s The Complete Curious Mr. Tarrant.

Beyond being recreational and a nice end to frequently long days (did I mention our 3-year-old?), reading aloud also helps take what’s usually a solitary event and make it a shared one.

One last point, though, aimed at writers now instead of readers: I can’t recommend highly enough reading your own work as a standard aspect of any drafting or revision process. Just as you can hear another writer’s prose in fresh ways through an audiobook, so, too, will you hear the strides and stumbles in your own writing by speaking it out loud, even to an empty room.

Grammar mistakes, omitted words, repeated or overused words — that’s only part of it. As novelist Jiro Adachi wrote in his essay “Writing that Sings” in the collection Rules of Thumb:

“Your written voice should burn with the first of fervent prayer, soothe like a friend’s voice during a late-night phone call, allure like a lover’s whisper. You must, through your accessible, read-aloudable voice, make your audience into an insatiable reader of your words. If this is not the effect that you feel when you read your own writing aloud, then go back to work and figure out which sentences to torque, which words to cut or to add, when to use a semi-colon or a dash.”

While on the topic of reading aloud, I can’t help but end with a bit of BSP: On Saturday, September 19, One More Page Books in Arlington, VA, will host the launch of my debut book, On the Road with Del and Louise: A Novel in Stories — and I’ll be reading briefly from it, of course! (Very briefly, I promise.) Come join in the festivities, which begin at the traditional cocktail hour of 5 p.m. — with the reading itself closer to 5:45 p.m.

It promises to be a singular experience.

Why tales of cooked babies and ax murderers still stop us cold.