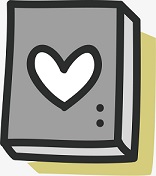 Two bits of fun over the last week led me to think about the idea of books we love — think about it both warmly and critically.

The first was a Facebook challenge: Post photos of seven books you love, one each day for seven days, no explanation needed, and pass the challenge along to someone else. More on that in a moment.

The second was my wife, Tara, and me showing our son, Dash, our wedding video for the first time — sparked by us celebrating our 10th anniversary this past Thursday. Most weddings feature readings — Paul’s First Letter to the Corinthians topping the list, surely, though poems by Shakespeare and Browning are also favorites.

But our ceremony featured three readings from classic and contemporary fiction. (Our minister, the wife of my high school English teacher, joked that Tara and I had thought about getting married in a library.)

As one of our friends read a section from Charles Baxter’s The Feast of Love, Tara said, “I just love that book” — a sentiment I share. Later, another friend read Kathy Fish’s “One Purple Finch,” a flash story that brims with emotion and left me tearing up a little when I first read it.

It’s maybe easy to understand why we love those readings (the third was an excerpt from Les Misérables): They are passages that spoke something important to us and expressed something important about us, now associated with one of the milestone events of our lives.

But I also love Baxter’s Feast of Love for different reasons — chiefly because of its masterful structure, orchestrating the voices of a wide range of connected characters, each of them stepping to the fore to tell their own stories, their own versions of the shared story. And what an amazing job Baxter does of inhabiting those voices, each so distinctively real.

My admiration for Baxter there seems a different kind of love — still joyful but in a more intellectual, even academic way. The Feast of Love is, in fact, a book I’ve taught in my intro lit classes at George Mason University.

When I took up the Facebook challenge, I pulled out a notecard and jotted down the first books that came to mind — a list of more than a dozen. Narrowing it down struck me as difficult — that question of “Which book do I love more?” feeling like some Sophie’s choice among my bookshelves.

Certainly, it was just throwaway playfulness on Facebook, but it sparked me to ask bigger questions: Why do I love this book? What does loving this book say about me — or reveal about me?

(I won’t add all the ones I didn’t post, though Baxter’s Feast of Love was indeed on that notecard.)

Scanning those seven titles, I see various forms of love. Thus Was Adonis Murdered is just brilliantly, blissfully fun — traveling to Venice and spending time with these characters. In contrast, I don’t think I would call French’s book fun, much less blissful, but with each reread, I continue to be engrossed by it and in awe of it.

Bootlegger’s Daughter was not just a seminal title in terms of the growth of regional mysteries, and specifically Southern mysteries, but it revealed to me the richness of my native state of North Carolina as a setting for crime fiction.

Ellin’s stories represent my love of short fiction, and, in his hand, a mastery of the form that I might aspire to myself. Meanwhile, the melancholic, elegiac tone of Chandler’s masterpiece resonates with something about my own outlook on the world.

Meanwhile, during the week I was posting all these, Tara was reading old Three Investigators paperbacks from her childhood — nostalgia being another form of love. Plus, the Three Investigators’ adventures are really, really fun. I loved them, too.

Readers here: What books do you love? And do you always know why?

Art Taylor won this year’s Edgar Award for Best Short Story for “English 398: Fiction Workshop,” originally published in Ellery Queen’s Mystery Magazine. He is also the author of On the Road with Del & Louise: A Novel in Stories, and his short fiction has won four Agatha awards, the Anthony Award, two Macavity awards, and three Derringer awards. He teaches at George Mason University in Fairfax, VA.

Skip the resolution to read more. Instead, read better.