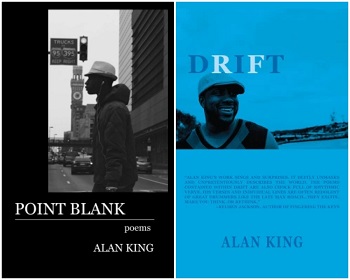 “What use is my sense of humor?”

– Robert Lowell, “Walking in the Blue”

Alan King’s poems are no stranger to confrontation. His two previous books, Drift and Point Blank, both carry a sense of responsibility to “make the invisible visible,” as Wallace Stevens put it, turning the gaze of the poems to the fractured navigating that Black folks enact to exist in America.

But the poems were always tempered — or, perhaps, infused is more accurate — with a kind of whimsy. The hunchback Quasimodo schooling a fictional version of the poet Tim Seibles, for example. In King’s newest chapbook, Crooked Smiling Light, the whimsy has largely given way to an often-unguarded lament, or as I have come to think about it, a licked chop.

I evoke that phrase for the sense of desire, the insatiable hunger to be known, to be well fed by memory, to be forgiven the time it’s taken to gain insight, but I also reach for that phrase for the image of the pugilist sucker-punched, taking his licks.

Crooked Smiling Light opens with a poem titled “In your dream,” where the speaker is locked in an Oedipal boxing match with the speaker’s father:

you bob your father's jab before
your right hook drops him. Before you trip him up
when he runs for his gun — the one he said
he'd blow you away with if you ever hit him

One almost thinks of the tragedy of Marvin Gaye when reading these lines. The poem progresses with maturity without spilling into any unnuanced sentimentality. And yet, the reader can feel a tug-o-war in the lyric, as it recounts moments that seem autobiographical: a father’s omnipresent displeasure in a choice of home, romantic partner, manners. After all, King writes:

“He has an appraiser's eye
for spotting the worst in everything —"

But as the dream and memory crest and fall throughout the stanzas, we arrive at King’s skillful synthesis of his own angst, his own myth-making, and the poem’s own uneasy epiphanies:

That's how Zeus must've felt
surviving his father's appetite
and jailing him to the underworld.

Which is where your father fell,
so far from Grace he squints
when he looks up at you.

This is a poem and a poet comfortable with taking time to discover a true feeling, a real sentiment. The chapbook returns often to these “battles” of being a parent, being a son, being a husband. In a poem that honors Nelson Mandela, “It’s not always the well-placed shot / that wins by knockout. // Courage is a pattern / of quick punches, rippling change,” King reminds us.

Journeying is centered in the narrative lean of the poems, which always find a way to let metaphor arrive like the best spice: a little late, but in time to renew the flavor.

I find myself rewarded for a patient reading. The poems are never far from the themes of family, parenting, and legacy. Still, there is a willingness to be playful to a point, such as in “In Remembrance,” where Amira Baraka is evoked right along with the Jedi temple of Star Wars:

poets training in the Jedi Temple

But I am most moved in this chapbook when King manages to be the most intimate. One of the standout poems in the book is “Beacon,” which recounts the story of King donating a kidney to a third party so his wife can receive a matching kidney to confront lupus. Here, a question of courage is posed in the narrative: “You do what you have to / for your wife whose life is leashed / to a box cleaning her blood.” It isn’t a stretch to think of the poem itself being kind of a dialysis machine for memory.

King’s lyrical intuition leads the poems into the lacunas of many unanswerable questions and seems to frame the mode of contemplation — in this case, the work of being a poem — against the action of performing a kind of unsustainable masculinity. Like many poets, myself included, who are of a liminal age between late Gen X and early millennial, King strive to understand a parent’s dual importance and irrelevance.

Not that this is a new concept, but it feels fresh among many Black parents for whom there are many kinds of phantom jabs: mass incarceration, school debt, an unfeeling medical industry. From all of these, the pain persists, but when you turn to face your opponent, you swing only at the simulacra of systems.

Maybe that’s why these poems by King are so important right now. We need a Crooked Smiling Light to see clearly. An astigmatism of language, as it were, that asks: What does it mean to be a parent when you can watch police murder a man on YouTube while you are feeding your infant?

The chapbook ends with “A Prayer for Bees,” which ties the book back to the rituals of lament. A poem is a thankless act, but no less a blessing. King writes:

Could you do it? you wonder. Die for sex?

Even if your life came down to that final task,

even for the good of the colony.

One hears in these lines the struggle with responsibility and desire, and while King is drawing on many traditions, the bent of the lyric reminds me most of Lowell’s Life Studies. Good company to keep, I think, because when the dream ends, one might realize that he hasn’t been fighting his father, but himself.

Steven Leyva, an assistant professor in the University of Baltimore’s Klein Family School of Communications Design, is the winner of the 2020 Jean Feldman Poetry Award for his collection The Understudy’s Handbook.

Why we should bend the elements of isolation.

How motivational-interviewing tactics can help in poetry workshops.