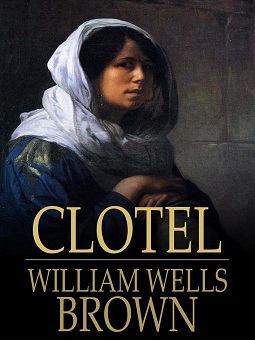 The year 1853 was a good one in the literary anglosphere. Charlotte Brontë gave us Villette, Dickens completed Bleak House, and Herman Melville published his multi-layered novella Bartleby, the Scrivener, which readers have admired and puzzled over ever since.

But the most astounding book that year was Clotel: or, The President’s Daughter by William Wells Brown, a novel whose relative lack of popularity can’t uproot it from its central place in American literature.

To say that William Wells Brown — born and raised simply as “William,” the son of a slave, and therefore a slave himself ­— led a remarkable life is to put his life in uncomfortably light terms. He spent his first 20 years as chattel, then escaped slavery to become a doctor, a helper in the Underground Railroad, a poet, an abolitionist, an internationally acclaimed memoirist, and the first African American to publish a novel.

Clotel begins with Currer, a mixed-raced slave, and her two teenaged daughters, Althesa and Clotel, being sold at auction. Brown blurs fact with fiction throughout the story, but the first bombshell of hybrid reality he drops is by far the most explosive: Thomas Jefferson, Founding Father, author of the Declaration of Independence, and third president of the United States, is Clotel and Althesa’s father.

In recent decades, the DNA testing that revealed Jefferson as the probable father of Sally Hemings’ children has become well known and nearly universally accepted. In the time of Brown, however, it was but a rumor, and an incendiary one at that.

Brown, too, was the son of a mixed-race slave mother and a powerful, white father. He makes front and center the “fearful increase of half-whites,” through an omniscient narrator who muses that the end of slavery might be brought about through the “amalgamation of races,” a phrase which, at the very least, enacts less violence on the eyes and ears than terms like “survival sex” and “systemic rape.”

On the auction block, Althesa and Clotel are sold for $1,000 and $1,500, respectively, and separated from their mother and each other for the rest of their lives. Currer is to be taken to the Mississippi town of Natchez, where she will run the kitchen of John Peck, a Methodist parson and plantation owner; Althesa will go to New Orleans, where she’ll serve as the handmaid to a young wife; and Clotel stays in Virginia, where it seems she has the luck of being purchased by her lover, Horatio Green, who intends to marry her.

Brown’s abolitionist intentions make Clotel something more than a novel at certain intervals — texturing the story with poems, songs, and journalistic asides — and something less at others, as when the characters hollow out, channeling Brown’s State-of-the-Union formality in order to deliver anti-slavery speeches.

Clotel’s character also goes fugitive, becoming as thin as Melville’s Ishmael and more of a ghost than Toni Morrison’s Beloved. When Horatio breaks his promise to Clotel by marrying the daughter of a powerful ally, for instance, Clotel’s response is filtered through the omniscient narrator, as is the case when she is later sold and separated from her daughter, Mary, who stays on to serve Horatio’s new wife.

After all this, our only way into Clotel’s thoughts is through her third owner, who quickly sells her because she refuses to eat.

Why the omission of the central character’s state of mind at two of her three most pivotal turning points? My interpretation is a straightforward Freudian one: Clotel may have been a stand-in for Brown’s own mother, Elizabeth, with whom he shared a close bond, and whose emotional turmoil he couldn’t bear to contemplate. The anguish, however, is spilled elsewhere in the book — everywhere else, in fact — with the cries of captured runaway slaves who vocalize all that Brown and Clotel cannot.

In one gruesome scene, a man is burned at the stake for the crime of resisting his master. After calmly submitting to his fate, the slave is so overcome by the horror of being burned alive that he begs to be shot, then breaks free of the stake — at which point he is shot and promptly thrown back onto the flames.

Fire consumes in an earlier scene, too, when slaves are killed in a boat explosion on the Mississippi. It’s here that Brown establishes his matrix of natural elements as literary device: the rubric is well underway by the time Horatio’s wife puts Mary under the midday sun, another type of fire, to darken her pale skin.

Brown evokes the element of earth through the daily grind of plantation work and the harrowing side-stories of escaped slaves who dash away and hide in forests and trees and swamps, away from the dogs and men who hunt them.

For many characters in the story, including Clotel and her family, water assumes a doubtful advantage as an elemental form. In yet another episode of attempted escape, a nameless man jumps off a boat, only to be poked with rods until he drowns. There’s a suffocating melancholy in the vessels that propel slaves south on the Mississippi, motoring them toward a life of the worst forms of plantation slavery.

But water also conveys people northward across the Ohio River en route to Canada, for instance, where Clotel breaks away to escort her accomplice, William, to freedom before going back south to snatch Mary away from the Greens.

Air is the final and freest of frontiers in Clotel. It’s what carries the voices of Reverend Peck’s slaves after his death, when his daughter emancipates them: “Hang up the shovel and the hoe/Take down the fiddle and the bow/Old master has gone to the slaveholder’s rest;/ He has gone where they all ought to go.”

But things don’t go as well for Clotel. In her final act, she embraces the air not with voice, but with body, jumping off the Potomac bridge to escape her pursuers. The water accepts her with all the mixed blessings it has meted out through the entire novel.

Clotel’s narrative follows the so-called “tragic Mulatta” trope, whereas her daughter Mary’s arc traces and retraces an outline of American diaspora, charting a course back to Britain, the place where the slaveholders’ ancestors fled their own unfreedoms and immovable hierarches. There, Mary can be free for the first time.

Mary’s imperial loop follows that of her creator, Brown, who also spent time in England and France in a tradition of exile that would be taken up by other luminary African-American writers in the 19th and 20th centuries.

Dorothy Reno is a senior review editor and classics columnist for the Washington Independent Review of Books. Her short fiction has been published in literary journals in Canada and the United States. She lives in Tbilisi, (former republic of) Georgia. If you would like to share your thoughts on Clotel: or, The President’s Daughter, please respond in the comments section of this article. You can join Dorothy in reading Jane Eyre, which will be the subject of her next column.