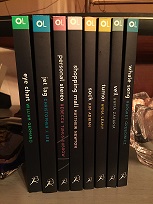 Bogost and Schaberg serve as the series’ editors, while the 2,000-word essays are published in no less a venue than the Atlantic (in their online Technology section), and the 25,000-word books are published by Bloomsbury.

Bogost explained the origin of the idea as having grown out of the concepts he explored in his book Alien Phenomenology; in particular, “a call for more frequent and more sustained attention to specific things.”

As he described it in the announcement of the series, “Each Object Lessons project will start from a specific prompt: an anthropological query, archeological discovery, historical event, literary passage, personal narrative, philosophical speculation, technological innovation, anything really — and from there develop original insights around and novel lessons about the object in question.”

Since then, 31 installments have been published, with at least 15 more in the offing, and the team continues to solicit proposals for additional projects. Besides being beautiful little hand-sized objects themselves, showcasing exceptional writing, the wonder of these books is that they exist at all. A couple guys champion the idea of establishing an open-ended essay project to a pair of big-name publishers, and they say yes! To essays!

The list of existing and forthcoming books is a random walk through a heap of objects, from the large-scale and encompassing (Earth by Jeffrey Jerome Cohen and Linda T. Elkins-Tanton) to the small and specific (Sock by Kim Adrian); things of which we have too much (Waste by Brian Thill) and too little (Silence by John Biguenet); things whose time has come (Drone by Adam Rothstein; Pixel by Ian Epstein) and gone (Phone Booth by Ariana Kelly; Shopping Mall by Matthew Newton); things that are a phenomenon of modern life (Jet Lag by Christopher J. Lee); and the things modern life is excising (Whale Song by Margret Grebowicz).

I wonder what object lesson lies in realizing that the two most politically charged objects in the series are head coverings: Veil (by Rafia Zakaria) and Hood (by Alison Kinney).

To read a few of these books is to understand generally what you will find in any of them. That’s in no way dismissive. The writing is uniformly excellent, engaging, thought-provoking, and informative. Each one uses its base object as a jumping-off point to range widely through a surprising collection of interrelated topics.

So, if a book called Sock makes you think, “Twenty-five-thousand words on socks? Uh, no,” then you’re unclear on the concept. You’re also missing out on a thoroughly delightful discussion of, among other things:

Imagine, then, that the less-prosaic of the Object Lessons are at least as wide-ranging as Sock. For me, it’s illuminating to understand the reason each author chose the subject she or he wrote about. The whimsical Eye Chart arose from author William Germano’s lifelong issues with myopia, while Anna Leahy’s project, Tumor, is informed by her intensely personal experiences of her father’s death from liver cancer and her mother’s from pancreatic cancer.

After digesting several of the OLs, I began to consider what mine should be. It didn’t take long to decide: Paper Route. True, it’s not an object quite like Remote Control (by Caetlin Benson-Allott) or Personal Stereo (by Rebecca Tuhus-Dubrow), but I’d argue it’s as much an object as Jet Lag or Traffic (by Paul Josephson).

It was never my idea to get the paper route, and I was not always a willing or gracious participant, but I had to save for college since, in my household, it was a given that 1) we kids were going to college, and 2) we kids needed to find a way to pay for it.

Thus, Paper Route, should it ever exist as an OL, will address certain obvious topics, though I would hope to make it more than just a misty-eyed elegy on the disappearance of both paper and news, or a grumpy lecture on the value of hard work and saving money (and walking barefoot uphill both ways in the snow).

Some of the less-obvious paths I’d like to explore include debt, higher education, the plummeting participation of able-bodied men in the workforce, and the need to recognize licensed trades as being of equivalent value to college degrees in a healthy, functioning economy and society.

I’ll let you know how it goes.