A Conversation with Alex Segura

The author shares the story behind Secret Identity. 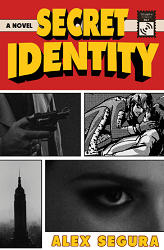 There was a lot of pressure on Alex Segura; there always is when an author is poised to publish their breakout novel. Segura had already achieved success with his award-winning short fiction and the five books in his Pete Fernandez mystery series, and he’d made a name for himself in the crime fiction community by taking on various leadership roles. But Secret Identity, his newest novel, was different. It was his first with a Big Five publisher and a departure — in time and approach — from the Fernandez series.

And, as every writer and publishing associate knows, past success is no guarantee for the future.

Then the reviews came in.

Secret Identity received a rare trifecta of shining stars from Publishers Weekly, Booklist, and Kirkus, with Kirkus writing, “It’s as powerful as anything since Michael Chabon’s The Amazing Adventures of Kavalier & Clay.” Acclaimed writers like Silvia Moreno-Garcia, S.A. Cosby, and PJ Vernon chimed in, too, with Vernon writing that Segura’s story is “beautifully spun and relentlessly gripping.” NPR called it a “masterful 1970s literary mystery.”

And one of crime fiction’s most esteemed reviewers, Oline Cogdill, wrote in the South Florida Sun Sentinel that the novel was “scintillating.” The New York Times weighed in with its own glowing review, and capped that off by making it one of its weekly Editor’s Choices. Seemingly every “most anticipated list” included Secret Identity.

The high praise is deserved. Secret Identity tells the story of a young, gay Latina named Carmen Valdez, who moves from Miami to New York in 1975 to pursue her dream of writing for comic books and is soon caught up in a colleague’s murder. The book is infused with the history of comics but is far from pedantic — both industry veterans and newcomers will find Segura’s research entertaining and accessible. And Carmen is a wonderful heroine, determined and unapologetic despite the grim difficulties of being a woman in a male-centric industry, particularly one that’s often financially imperiled.

Segura tells Carmen’s story with empathy and warmth, especially in the moments where she reflects on her family — and during a particular standout scene that lovingly captures the excitement of creative inspiration and collaboration. And the novel even includes graphics from a comic book Carmen is creating called “The Lethal Lynx,” drawn by noted artist Sandy Jarrell, with panels that expertly showcase different comic stylings.

I had the opportunity to ask Segura about his outstanding new novel and his career.

You had a lot of success as a novelist before Secret Identity, but this book is clearly a bit of a departure from your celebrated Pete Fernandez books. How did writing those books prepare you for this one?

I’ll be honest — I couldn’t have written Secret Identity out of the gate. It’s in many ways the book I always wanted to write, but I just wasn’t ready. There’s a lot to be said for spending a few years just learning your craft as you go, in the trenches. And a series helps a lot, too — because you have the comfort of recurring characters and themes. It’s a long-winded way of saying that writing my first five novels were a great way to make my bones and try out a lot of the things that I got to use to greater effect in Secret Identity. With the Pete novels, I spend a little time in New York, we do some flashbacks, there are some stylistic detours — all little sidesteps that make up big parts of the heart of Secret Identity. It’s an important lesson, and I’m glad I was able to stick to it. Be okay with not being ready to write that dream novel just yet. It’s okay to learn the craft a bit first.

Secret Identity has so much history in it. What in your background prepared you for such extensive research, both in regard to New York City and the comic book industry?

You say “research,” I say “obsessions.” I like to write about the things that I can’t get out of my brain. That makes the “homework” part of it go away. I knew coming out of the Pete series that I wanted my next novel to be about comics and noir and really transport people not only into the industry, but into a different point of time for comics — in the way the work of writers like Megan Abbott do so well. She takes you behind the curtain with things like science, cheerleading, dance, gymnastics, and then injects classic noir elements into those stories, and they just work. I wanted to do something like that for comics. So, in terms of research, I just immersed myself in the content — I read a ton of books about the comic book industry and its history; some were re-reads, many were new. I interviewed a number of people that worked in comics at the time, especially women who could speak to me about what it was like for them. I also had a lot of friends who worked in comics back then that helped with fact-checking and little textural details that added to the verisimilitude of the book — to help give readers that sense that this book could’ve actually happened.

The New York stuff was a similar blend — I wanted the facts right, of course. But I needed to nail the tone and vibe of the city, too. So I read some fiction set in that era and Will Hermes’ fantastic music history of New York in the 1970s, Love Goes to Buildings on Fire, which covers not only the punk stuff, but jazz and Latin music. It helped make the book feel more rooted in its time, I think.

You’re so active in the crime fiction community and, when you’re in that space, it’s often in a mentoring role. What mistake have you made in your career that you would warn new writers about?

If I was mentoring myself — ha! — I’d probably say I take on too many projects and I don’t really know how to say no! As far as my early days — I would’ve told younger me to finish what I started. I had a lot of half-baked ideas, unfinished novels, and short stories. But I eventually figured it out. One thing I try to be mindful of is that everyone’s journey is different. It took me six novels to get to this book — which many seem to be treating like a debut, which is fun and funny — while some people blow up out of the gate. I think patience and doing the work is the best advice overall.

You mentioned that there will be a sequel to Secret Identity. Can you provide any information about that?

It’s the other side of the coin to Secret Identity. It’s set in the modern day with a new protagonist, a cartoonist who is disillusioned with mainstream comics. She somehow gets pulled into taking a gig relaunching an obscure 1970s superhero from a failed company — the Legendary Lynx. She takes the gig because she loved the character as a kid and because the social media fervor for her to do it was huge. She also wants to write a graphic novel about the experience. But as she gets deeper into the work, she starts getting mysterious messages — with clues pointing her toward the fact that there might be much more about the Lynx and her origins — that the protagonist doesn’t know. Carmen will also be in it, as will some other characters from the first novel, but I’m trying to treat it as a standalone in the same universe that bookends Secret Identity.

The accolades and starred reviews have come in, and more are certainly on the way. What’s been the best part of this process?

The New York Times review really got me. Never in my wildest dreams, even when I was wishing someone would write a novel with comics in it, did I imagine that person would be me, and that it would be reviewed by the Times. It just felt like such a meaningful moment. I’m an anxious multitasker, but I really, really tried to enjoy that. It doesn’t happen all the time.

Bigotry and the American novel