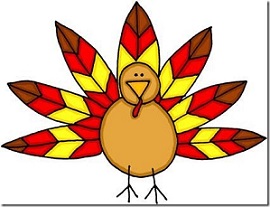 I’m not sure who originally decided to put Election Day so close to Thanksgiving, but this year the whole thing seems like a bad idea. On the heels of historically divisive campaigning and voting, the thought of “a house divided” will likely take on literal meaning at family gatherings around the country.

Too many people overwhelming too small a space; family discussions heating up faster than the dinner itself; the carving knife ever close at hand — really, how are any of us supposed to survive the holiday?

1. Maintain a Sense of Grace. I’ve recently been savoring The Art of Grace: On Moving Well Through Life by Pulitzer Prize-winning Washington Post dance critic Sarah L. Kaufman. While that combination of grace and dance may suggest certain things about the book, Kaufman’s study widens its scope well beyond a study of physical elegance. Of particular interest here are chapters like “Grace Among Others” and “The Grace and the Art of Getting Along,” and I adore Kaufman’s accounts of her sixth birthday party and of a Thanksgiving she herself hosted in her teens. “Tolerance of all, and harm to no one,” she reminds us, paraphrasing Chinese philosopher Zhuangzi, and then draws on Martin Luther King Jr.’s example to stress that “it is separation, rather than inclusion, that brings us into conflict.” (However, there’s also a subsection on “The Culture of Coarseness” whose critique proves as sharp as that aforementioned carving knife; just try not to point that in anyone’s direction either.)

2. Drink Your Troubles Away. No surprise here: Imbibing has helped many of us make it through an awkward social encounter. My wife and I have recently enjoyed a terrific cocktail ripe for the season: Falling Leaves from The PDT Cocktail Book by Jim Meehan — smooth and satisfying.

That star anise really elevates the feel of the drink. Sip several while reading Kaufman’s book above, and grace might seem even more elegant and effortless.

3. Eat Right — or, um, Left. (Whichever.) Whether your Thanksgiving dinner is potluck or not, sneak in a little dish of your own — and as a healthy alternative, why not vegetarian? We’ve got several vegetarian cookbooks on the shelf, including Feast, Eat Your Vegetables, Vedge, and Herbavoracious; the latter includes a Brussels Sprout and Apple Hash that’s billed as perfect for Thanksgiving — and this recipe is also available on the Herbavoracious blog. (When it comes time to make your plate, take a stand — completely skip that giant turkey that got elected main entrée and fill your plate with your own candidate of choice.)

4. Focus on Football. Again, no surprise: Talking sports, focusing on the game on the screen — much better than arguing over a spoiled election (though I recognize that even there, you might be backing the other team; always tread carefully). To maintain my book tie-ins here, how about Dave Meggyesy’s Out of Their League? (I can’t count this as a full recommendation, since I haven’t read the book, but the title seemed apt somehow.)

5. Keep Calm and Go Shopping. Beyond simple shopping therapy, you can also feel positive about what you’re buying. First, skip the mall (the voting demographics there are also uncertain), and instead visit Out of Print Clothing online. You’ll find T-shirts, tote bags, and more featuring classic book covers (1984, Brave New World, the Choose Your Own Adventure book War with Evil Power Master) and literary themes (the banned-books socks seem timely too). Equally important, you’re doing good in the process, since purchases support literacy programs and provide books to communities in need.

6. Support Good Causes Generally. Keeping with the idea of doing good, give to organizations that support your values. For the balance of 2016, Black Lawrence Press will donate one dollar to the American Civil Liberties Union for every book purchased through their website — such as Baltimore author Jen Michalski’s The Tide King, available at the BLP site here. Also local: the literary journal Barrelhouse has recently announced The Barrelhouse Amplifier, a $1,500 cash award for an emerging literary organization; nominations will be accepted through the end of the year. As the editors explain it: “Here at Barrelhouse, the things that have always helped us get through dark periods in the past are literature and the literary community. What is writing and reading if not a call and response? Am I alone? No, you're not alone. I hear you. I feel these things, too.”

7. Bury Yourself in a Big Book. If all else fails, it’s easy to simply curl up in the corner and read. Might I suggest Edith Wharton's The Age of Innocence? The first book by a woman author to win the Pulitzer Prize, it boasts fascinating characters, great drama, and rich themes, such as the hypocrisy of New York’s upper classes, the double standards between men and women, and the differences between American and European morals — all centered on a group of people hardly prepared for the vast changes of the century ahead.

(An interesting tidbit: Wharton’s “win” was controversial, since the jury actually chose Sinclair Lewis’ Main Street but were overruled by the Pulitzer board, which cited the award’s mission to celebrate a novel “which shall best present the wholesome atmosphere of American life, and the highest standard of American manners and manhood.” Wharton’s letter to Lewis on this account is worth quoting: “When I discovered that I was being rewarded — by one of our leading Universities — for uplifting American morals, I confess I did despair. Subsequently, when I found the prize shd [sic] really have been yours, but was withdrawn because your book (I quote from memory) had ‘offended a number of prominent persons in the Middle West,’ disgust was added to despair.”)

If you’d prefer to read Lewis’ work, by all means do, but forewarned is forearmed: When Uncle John balks at the cover copy of the current Signet edition, which calls the book a “satire of narrow-minded provincialism” exposing “the pettiness and bigotry of small-town minds,” it’s maybe easiest to shrug it off as fiction. I mean, what did the United States’ first Nobel Prize-winning author know about anything anyway?

Oops. Rereading this, I think I’ve somehow strayed from my own first suggestions about grace and good drinking. Time to pour myself a cocktail and revisit Sarah L. Kaufman’s Top-Ten “Tips for Moving Well Through Life.” Right there in the number-two spot stands some key guidance: “Practice tolerance and compassion.”

Happy Thanksgiving to all!

[Editor's note: This piece originally ran in 2016, but it's still scarily relevant.]

Art Taylor is author of On the Road with Del & Louise, winner of the Agatha Award for Best First Novel. He’s also an associate professor in the English Department at George Mason University.

Like what we do? Click here to support the nonprofit Independent! And try the Tofurky already. It’s not that bad.
comments powered by Disqus

A look at what’s simmerin’ on the shelves this month