6 Memoirs to Watch For

These must-read releases are coming soon! 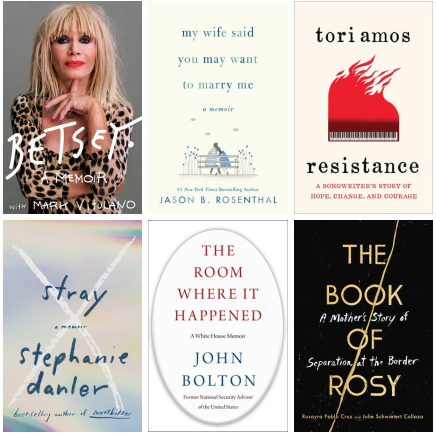 Whether they’re about family, loss, social justice, politics, or even rock ‘n’ roll, memoirs appeal to a lot of us. Here are some soon-to-be-released noteworthy ones written by a diverse group of authors sharing equally diverse experiences.

Betsey: A Memoir by Betsey Johnson (Viking, April 7th). Fans know Johnson as a “wild child” single-mom designer who hung around Edie Sedgwick, Twiggy, and the Velvet Underground. But few people know that she started her business from scratch, and that she managed to reinvent herself and her brand after filing for bankruptcy in 2012.

My Wife Said You May Want to Marry Me: A Memoir by Jason B. Rosenthal (Harper, April 21st). In 2017, Amy Krouse Rosenthal wrote an essay for the New York Times’ Modern Love section titled, “You May Want to Marry My Husband.” It was published 10 days before her death from ovarian cancer. Now, Rosenthal’s husband, Jason, has turned his own recollections of his life with Amy into a heartbreaking, touching story.

Resistance: A Songwriter’s Story of Hope, Change and Courage by Tori Amos (Atria, May 5th). A well-timed and compelling call to action, this memoir by Grammy-nominated and multiplatinum-selling singer/songwriter Tori Amos directs readers to engage with social activism, addresses the #MeToo and #TimesUp movements, and encourages younger generations to fight for their rights.

Stray by Stephanie Danler (Knopf, May 5th). After her bestselling debut novel, Sweetbitter, was made into a television series, Danler believed that now was her opportunity to finally be happy. Instead, she became unable to let go of a complicated past she thought she’d left behind, including a mother disabled by alcoholism, and a father who abandoned her. Making the journey from New York to her Southern California hometown, Danler asks herself the difficult question: When is it time to let go?

The Room Where It Happened: A White House Memoir by John Bolton (Simon & Schuster, May 12th). Bolton, a seasoned government official who has served multiple presidents, was President Trump’s national security advisor for a total of 519 days. In this memoir, he offers an account of his experience working in the Oval Office and of the facts related to Trump’s impeachment.

The Book of Rosy: A Mother’s Story of Separation at the Border by Rosayra Pablo Cruz and Julie Schwietert Collazo (HarperOne, June 2nd). When Cruz decided to seek asylum in the United States with two of her children, she knew the dangers of the journey ahead. But violence had made life in Guatemala unbearable, and her family’s only chance of survival was to escape north. The Book of Rosy tells the story of the people who travel thousands of miles seeking refuge and of how Cruz’s own children were taken from her at the border.

Adriana Delgado is a freelance journalist whose reviews of independent and foreign films have appeared in Cineaction magazine, on Artfilmfile.com, and elsewhere. She also works as an editorial news assistant for the Palm Beach Daily News (aka “the Shiny Sheet”) and contributes to Library Journal.