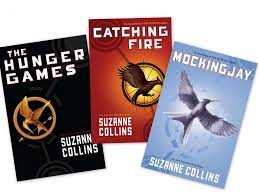 “The Hunger Games: Catching Fire” debuts today, and there’s a good chance it’ll shatter box-office records. And in March 2014, “Divergent” will hit the silver screen with almost as much fanfare.

What do these films have in common? They’re both based on wildly successful young-adult (YA) dystopian novels. If you’ve never delved into this popular genre, you should. Here are three excellent series to get you started.

1. The Hunger Games trilogy by Suzanne Collins (Scholastic). This series follows 16-year-old Katniss Everdeen, who lives in a post-apocalyptic America called Panem. Every year, each of the country’s 12 districts must offer up two teenagers to compete in the televised “Hunger Games,” a gladiator-style fight to the death designed to keep citizens fearful of — and obedient to — Panem’s corrupt central government. When Katniss is chosen to participate, she must find a way to survive—and possibly end the games forever.

2. Divergent trilogy by Veronica Roth (Katherine Tegen Books). This series is set in a future Chicago, where people are divided into factions based on their virtues: Amity (the peaceful); Candor (the honest); Dauntless (the fearless); and Abnegation (the selfless). At age 16, the society’s youth must decide which faction to commit to for life. But when teen Beatrice Prior makes her choice, it reveals a secret that not only puts her life in danger, but also causes her to question her world’s very foundation.

3. Under the Never Sky trilogy by Veronica Rossi (HarperCollins). In this post-apocalyptic series, 17-year-old Aria is forced to leave her home in Reverie, a giant dome she’s never been out of; a place where people live digital lives through an eyepiece similar to the concept of Google Glass. In the outside world, there’s no technology and no eyepieces. Will Aria learn to rely on her wits rather than on gadgets?

What’s your favorite dystopian YA novel or series? Post it on our Facebook page,tweet it to @WIRoBooks, or let us know in the comments section below!

10 Coming-of-Age Novels from around the World

An array of international tales spotlighting the struggle to figure it all out.