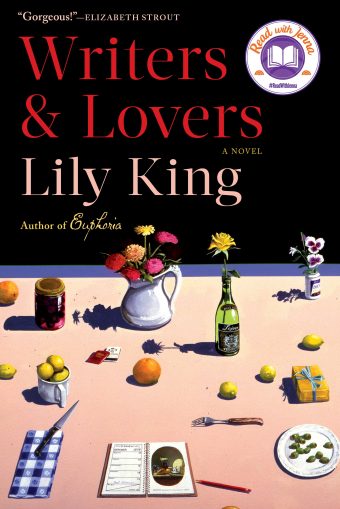 Though Lily King’s new novel is titled Writers & Lovers, it’s just as much about mothers and loss. Indeed, mothers and loss deeply inform the writing and loving that characterize the book’s primary subjects.

It’s the summer of 1997, and Casey is a 31-year-old waitress in Boston mired in $73K in college debt and reeling from the sudden death of her mother and recent breakup with her boyfriend. She’s written most of a novel, but she’s unable to finish it, which further sinks her self-esteem.

Health issues plague her, as well: cervical dysplasia, an unsettling lump in her breast, and precancerous skin cells. King immerses her protagonist in a swirl of problems, worrisome both in their ordinariness (like so many Americans, Casey lacks medical insurance) and magnitude (how does one ever get over the death of their mother?).

Will Casey finish her book? Find new love? Pay off her debt? Begin healing from her mother’s death? Each of these questions is made compelling by King’s lucid, confident writing, and her attention to the burden of real-life problems invites the reader to settle into the story.

Casey’s observations are relatable, comical, and revelatory. On the first page, she describes her wealthy landlord, Adam, an old college friend and crush of her brother’s. When Adam mentions he must meet “with the judge at the courthouse at seven sharp,” Casey’s internal voice editorializes: “Admire me. Admire me. Admire judge and courthouse and seven sharp.”

In this brief description, we understand how Adam fits into the constellation of people surrounding Casey, and how his conventional success puts her own struggles with poverty into high relief.

Similarly, Casey’s colleagues provide an opportunity for King to immerse readers in the richness and stresses of her protagonist’s work life. There is Casey’s friend Harry, for example, a gay Pakistani-English waiter who confides that, upon Anglicizing his name from Haroon, his skin “magically lightened…After that I was just one of the lads.”

And there is Mary Hand, the best waitress with whom Casey has ever worked and who “knows your tables as well as she knows her own.” Rumors suggest she used to date David Byrne — a detail brought to satisfying resolution at the novel’s end.

King is a master of crafting beautiful details with economy and wit. In her acclaimed Euphoria, she used antiquated phrases and idioms to breathe life into 1930s-era characters. Though Writers & Lovers is set in contemporary Boston, a decidedly less far-flung location than the New Guinea of that previous novel, King lavishes the same attention on her world-building.

Describing a soiree, King writes, “the air smells like a cocktail party from the seventies, aftershave and martini onions.” Later, the author demonstrates how the loss of Casey’s mother invades even mundane moments, such as when Casey opens her apartment door following a date: “The bolt retracts, and I remember she died.”

King’s rich but short chapters (some are only a few pages long) give the reader a constant feeling of movement, even when Casey herself seems stuck.

A romantic subplot also propels the novel forward. In the midst of her many problems, Casey meets Oscar, a famous, middle-aged novelist and widower with two young boys, and Silas, a fellow struggling writer and student of Oscar’s.

As she moves toward deciding between the two men, she must also summon the courage to share her novel with others. When Casey takes the step of sending her manuscript out to agents, the reader gains insight into the business side of writing — the anxiety of looking for agents, hoping for a sale, waiting for the call.

The act of writing is, in fact, a silent character in Writers & Lovers. So it’s fitting that writing is how Casey begins healing from the losses — big and small — in her life. Early in the book, when the irksome Adam makes yet another snarky comment about her novel, Casey notes to herself, “I don’t write because I think I have something to say. I write because if I don’t, everything feels worse.”

It’s that creative compulsion that ultimately changes Casey’s world and provides the reader with insight into how writing is healing and, sometimes, even redemptive.

Samantha Rajaram is a writer living in Redwood City, California. Her work has appeared in India Currents Magazine and Catamaran.

In this quiet, tightly woven tale, a middle-aged Kiwi gambles that he’ll be able to make a new life in post-9/11 London.