The endless zany situations in this comedic drama will make you want to visit Nantucket at Christmastime (or anytime). 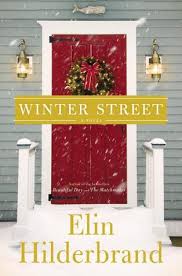 Elin Hilderbrand’s novel Winter Street is a family-centered comedic drama that hinges on a series of surprise revelations — who is broke, who is pregnant, who is going to jail, etc. The Quinn family is gathering for Christmas in Nantucket, but their main business is continually discovering all the things that have been going on right under their noses.

As such, a review should not ruin all the surprises by going into too much detail about who is secretly doing what. However, the first reveal happens after just a few paragraphs: Kelley Quinn’s second wife, Mitzi, is having an affair.

Kelley bought the Winter Street Inn for Mitzi, whom he met during something of a midlife crisis when she was 25 and he was 41, and she was the Roller Disco Queen of King of Prussia, Pennsylvania. Despite the deafening number of clichés, the two managed to build a relatively stable family life in the intervening 21 years, centered on living her dream of owning the quaint inn she had visited for years.

Kelley, his first wife, Margaret, and their three children are both surprised and not surprised by this turn of events. After all, this is the woman who “believes in holistic medicine and chakras and energy work and the healing power of crystals” and who went from roller disco to spending exorbitant amounts of money restoring an inn built in 1873. She is changeable and credulous and, as his oldest three children used to chant, “Mitzi is ditzy.”

So, after Mitzi leaves Kelley for the man who has played the role of Santa Claus at the inn’s Christmas party for 12 years, the rest of the Quinns are relatively well-positioned to move on with their lives. What they are not ready to abandon, however, is their life in Nantucket. Even Margaret, now a nationally renowned news anchor in New York City, feels an affinity for the island and the old inn, although her occasional presence was never appreciated by Mitzi.

Soon, Margaret will join the rest of the Quinns for their tumultuous holiday, but first the three adult children must wade further into their own personal dramas. Hilderbrand approaches much of this family drama with humor.

For example, the youngest daughter, Ava, is dealing with the disappointment of her commitment-phobic boyfriend, Nathaniel Oscar — whom she lists in her cell phone as “NO.” He has abandoned her to spend the holidays with his wealthy family and recently divorced high-school girlfriend, rather than staying to propose to her on Christmas Eve as she had hoped.

Her brother Kevin has love-life drama after a disastrous first marriage to a woman Ava thinks of as “Norah Vale the Cautionary Tale.” Meanwhile, her brother Patrick has work drama, and Kelley and Mitzi’s 19-year-old son, Bart, has been deployed to Afghanistan — and no one has heard from him in a while.

Despite the fact that the plot centers on a series of surprises, the surprises are not always that surprising, especially for anyone familiar with holiday programming on Lifetime. For the most part, the story follows the traditional pattern of stories about families and holiday obstacles.

The various family members — aside from Mitzi — will allow themselves to wallow in their disappointment and fear only temporarily, after which they will inevitably rally and do what needs to be done. Kelley will come out to greet his guests at the Christmas party he thought would be canceled. Kevin will overcome the fear that Norah Vale instilled in him. Patrick will decide to face the music at work. Margaret will put her glamorous life on pause for the sake of her family.

And Ava may even learn to say “no” to NO.

The ending of Winter Street is not abrupt, but it leaves a few plotlines dangling. The entire book takes place over three days, and readers do not get to see every conflict completely resolved. But as each chapter cycles through narrators — giving everyone but Mitzi and Bart the chance to tell the story in his or her own way — readers get a sense of each character’s personality and perhaps can guess what might happen after the novel ends.

Hilderbrand also resists the temptation to tie up every emotional loose end. Patrick — the “golden boy” oldest — never really connects with Kevin and Ava because he believes their problems are beneath his own.

We also never find out what happens to the little girl at the school where Ava teaches, whose mother died a few months earlier. One may suspect the girl’s widower father is intended for unlucky-in-love Ava — but since Hilderbrand writes all her novels about Nantucket, her home base, and occasionally reuses characters — perhaps he is being saved for another romance in a future story.

Overall, Winter Street is an entertaining read about a likeable family kept from being too boring by their endless propensity to get into crazy situations. Readers may develop a desire to visit Nantucket at Christmastime, which Margaret drily compares to “being suspended in a Thomas Kinkade painting,” but admits is “cozy and rustic.” Perhaps the same could be said of the novel itself.