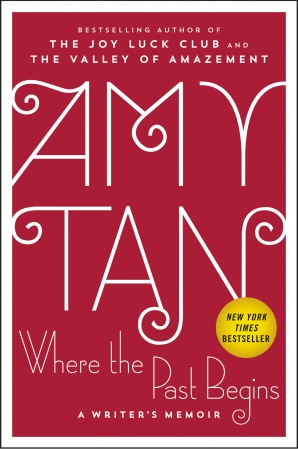 The memoir rivals the novel in elasticity. Varied in matter and manner, memoirs by the notable and not so notable issue from every field of human endeavor. Generals have favored the genre — Mémoires du Général Baron de Marbot (1892), to cite a distinguished example — as have popular artists — one instance being Billie Holiday’s elegant Lady Sings the Blues (1956). Literary memoirs, not surprisingly, tend to be subtly conceived and executed — Henry James’ A Small Boy and Others (1913) and Notes of a Son and Brother (1914) being exceedingly refined examples.

In sophisticated cases, the inquiry extends to how and why representing the process of remembering also affects what is remembered. Inherently deconstructive, put differently, such memoirs affirm the difficulty — really, the impossibility — of recovering the “real thing” (in James’ phrase), or of finding the “there there” (in Gertrude Stein’s), or of writing about it.

In the opening chapter of her engrossing new memoir, Amy Tan defines “the process of writing [as] the painful recovery of things that are lost.” The unmistakable allusion to Proust may remind us that Scott Moncrieff’s early and poetic translation of “à la recherche du temps perdu” as “remembrance of things past” eventually gave way to the more prosaic, but also more accurate, “in search of lost time.”

If all writing is recovery, as Tan suggests, then it wants to recover the distance between things and us, not things themselves. All writing, in this sense, aspires to the condition of memoir.

Tan signals these nuances of the genre in the obliquity of her title: Where the Past Begins. She implies that her past begins in space (where, as opposed to when): in the physical space of local cultures (Shanghai, Oakland); in the intangible — but not incorporeal — space of familial relationships (mother, father, brother, spouse); and in the incorporeal space of memory as it becomes incarnate in writing. The “things that are lost,” however, as Proust knew and Tan affirms, ultimately lie neither in space nor time, but in the searching for them through space and time.

Tan’s deft subtitle, A Writer’s Memoir, equally oblique, in effect promises two memoirs: one of a writer qua writer, the other of a young girl and woman who eventually becomes that writer.

Tan believes, obviously, that the two memoirs are one, because the professional and personal are fused in artistry. If the distinction is ipso facto moot in conceptual terms, however, it is not moot in either operational or experiential terms: Tan selects the content of what she will write and directs what her reader, as a result, reads. Focal choice matters.

Tan had described her earlier book of nonfiction, The Opposite of Fate: Memories of a Writing Life (2003), as “musings on my life,” its pieces called “musings because the writings are mostly casual pieces rather than formal essays.”

Their pattern — “questions of fate and its alternatives”— became clear to her only after the fact, as did the insight “that these permutations of changing fate [she catalogues 17] are really one all-encompassing thing: hope.” A reader who infers from “musings” that The Opposite of Fate will be a “loose, baggy monster” (to invoke James again) will be wrong: Its pattern and theme make for a tightly focused work.

More heterogeneous in form, Where the Past Begins comprises a lengthy introduction (superfluous and distracting, since the book shows itself brilliantly and needs no telling); six main sections that together include 13 chapters interleaved with 10 elliptical “quirks” and four more rounded “interludes”; and a hypnotic epilogue.

Tan offers cogent, even compelling, reasons for the types of content she has chosen, but at least one choice — a long series of emails between her editor and herself, largely shoptalk — does not make captivating reading.

Minor quirks aside, however, Where the Past Begins wields fierce aesthetic, intellectual, and emotional force. Its opening section, Imagination, and closing section, Language — respectively centered on Tan’s absorption in music and her study of linguistics — define the antipodes of her art.

What unfolds between them, too rich and tight for summary, finds signal emotional centers of gravity where Tan plumbs her struggle to recover an “original experience” in a story that “resonates as true. It is the feeling of what it felt like when it happened,” or where she puts that struggle in the service of recovering “the father I did not know.”

Only deceptively loose, in short, this highly crafted book reflects Tan’s comment that, “as a fiction writer, I love inconsistencies, gaps in information, contradictions, false leads, and changing details.” A master of such feints, she can write that “long after [my father] died, my mother told me about the terrible guilt he felt for having fallen in love with a married woman,” fewer than 40 pages after she has written, “We are all unreliable narrators when it comes to speaking for the dead.”

And in a book that cherishes memory, she can quote her mother, raped by an abusive first husband: “‘Depress because cannot forget,’ she said.”

Just as alternatives to fate focused The Opposite of Fate, the counterforce to death — imagination — focuses Where the Past Begins. The dead roam this book: Tan’s grandmother, who died by her own hand; Tan’s father and brother, who both died of brain tumors (and both in the same year, Tan’s 15th); and, ubiquitously, Tan’s mother, who died decades later from Alzheimer’s disease. Even Tan’s dogs, recently deceased “companions in the house,” haunt the book’s epilogue, neither diminishing nor diminished by the human deaths that they simply extend.

What, then, of imagination, the counterforce? Hemingway wrote that “all stories, if continued far enough, end in death and he is no true-story teller who would keep that from you.” Amy Tan, at once a true-story teller and a true storyteller, conjures her dead in this extraordinary memoir and meets them not with judgment nor sentimentality, but with a feat of imagination that avoids and transcends both.

Charles Caramello is professor of English at the University of Maryland and current John H. Daniels Fellow at the National Sporting Library and Museum in Middleburg, VA.