When the Plums Are Ripe: A Novel

This literary exploration of Cameroon’s role in WWII demonstrates how every soldier must fight his own war. 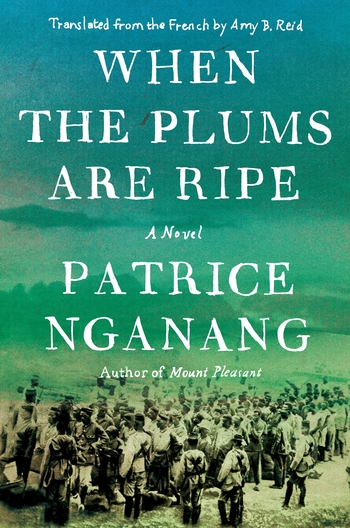 Patrice Nganang’s When the Plums Are Ripe illuminates a fascinating chapter of World War II history: the role of Cameroon in the French fight against the Axis powers in North Africa. The novel opens with the fall of Paris in 1940 and the question, “Was Cameroon going to remain under the control of a defeated country?”

Now under French rule, Cameroon had previously — through World War I — been a German colony. It is against this complex colonial past that Nganang weaves a sweeping story of a nation seeking independence and forging a new identity.

Cameroon’s position is not simple, and its citizens hold an array of views on the nation’s future. Older Cameroonians remember the time of German occupation, while younger ones do not. Nganang writes:

“For some there, Germany was avenging those who had suffered twenty-five years of French colonization. For others, all that was old news. Their basic argument was that if you had to choose between the French and the Germans, there was no good choice.”

While Nganang is adept at posing these larger questions, When the Plums Are Ripe is not a history book but rather a novel peopled with a host of vividly drawn characters that bring history alive. And though the novel covers the doings of significant figures like Charles de Gaulle and François Leclerc, the real heart of the story lies in village life, with ordinary people for whom the world conflict feels distant — at least, in the beginning.

One of these characters is the aspiring poet Pouka, who takes a leave of absence from his position as a civil servant in the French administration to return to his village of Edéa and establish a poetry circle. “With his belly full of alexandrine verses, his mouth full of impatient rhymes,” Pouka imagines the French poets Nerval and Gautier “sitting on overturned crates and discussing art.”

But Pouka soon learns that in order to “bring about the birth of Cameroonian poetry,” he has to do the hard work of teaching his illiterate protégés how to read: “Before he could teach them to write alexandrines, he’d have to teach them the alphabet!”

Before Pouka makes much headway with his budding poets, Cameroon is swept up in the war, so that he “could only stand by and watch, unable to stop the hemorrhaging of his little circle of poets.” The soldiers, “dressed like bandits,” are ill-equipped and poorly treated by their French commanders.

Any African soldier — regardless of his country of origin — is called tirailleur sénégalais, or Senegalese tirailleur. “The phrase tirailleur sénégalais was really just a lazy turn of phrase on the part of the French that no one had bothered to correct,” Nganang writes. “All the Africans they recruited were deemed ‘Senegalese.’ It just made things easier, simpler. Like any other insult.”

Enduring racism and physical suffering, the soldiers (who indeed came from Senegal and other African countries, in addition to Cameroon) fight in a war that feels like someone else’s — a war being fought on the colonizers’ behalf. And the tirailleurs’ reasons for joining the war effort are, as Nganang shows us, deeply personal and idiosyncratic.

Pouka’s cousin Hegba, a woodcutter, is the first recruit, signing up after the mysterious and shockingly brutal murder of his mother. His reasons for fighting are his own: “He hadn’t yet found the Man who had done that, his invisible adversary. The rage within him was the other face of his love for his mother.”

Meanwhile, another recruit, Bilong, the youngest member of Pouka’s poetry circle, “had signed up to escape from the smothering embrace of women.” Fleeing his passionate lover as well as an overbearing sister and other village elders, “Bilong had become a soldier because of an excess of love.”

The other men have similarly personal reasons to join the war effort. Nganang shows us again and again that war, on the individual level, can only ever be a personal affair.

When the first of their circle dies valiantly in the Battle of Murzuk, the surviving villagers perform a traditional song of mourning. “What kind of life is this,” they sing, “that tears them from the forest and throws them away in the desert? Just what kind of death will they find so far from home?”

The song was “lost among the endless trail of these hundreds, no, thousands of men — what am I saying, there were forty thousand of them” who had left home to “become something they never thought they would: cannon fodder.”

Nganang’s entire novel can be viewed as a song of mourning for the thousands of African soldiers who were reduced to cannon fodder in the global conflict of World War II.

The author’s narrative is self-conscious about its role in telling a story that has not been adequately told; the narrator often lapses into meta-reflection about giving voice to the colonized — as opposed to versions of history written by the victors. And he is aware of the silencing of the soldiers’ voices and of his own limitations as storyteller.

When the Plums Are Ripe is an attempt to get at that “real story” that can come only after the official histories penned by the colonizers. In addition to the trials of the men at the front, this remarkable novel also tells the stories of women — tales of love, rape, childbirth, and divorce —as their lives, too, are irrevocably changed by war.

The second book in a trilogy that chronicles Cameroonian history of the 20th century, When the Plums Are Ripe is a complex novel that asks to be read slowly and, preferably, more than once.

Karma and the Art of Butter Chicken

The past and present mingle in this charming story about the healing power of food.