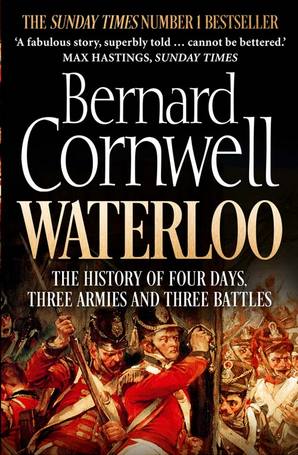 With June 2015 being the bicentennial of the Battle of Waterloo, a raft of new books on this pivotal conflict is now available. Jumping into the fray is historical novelist Bernard Cornwell, who, in Waterloo: The History of Four Days, Three Armies and Three Battles, tries his hand at writing a solid narrative history.

For the most part, he succeeds.

Cornwell is primarily known for his bestselling Richard Sharpe series, set during the Napoleonic Wars. Bringing his novelistic verve and expertise of that time period to this story, Cornwell’s book is, in addition to a terrific rendering of the Waterloo Campaign, a study in the character and leaderships styles of the French Napoleon Bonaparte and British Duke of Wellington.

Readers will delight in Cornwell’s dramatic depiction of Waterloo, along with the precursor battles of Ligny and Quatre Bras. His skillful use of primary accounts from both sides — as well as from officers and regular soldiers — casts a gripping tale against a backdrop of what led up to one of the most momentous battles in world history.

A sense of tension pervades the book as Cornwell examines how the battle of June 18, 1815, evolved in the face of the defeat of the Anglo-Prussian Alliance at the Battle of Ligny, where the Prussians were defeated by Napoleon’s forces, and then at Quatre Bras, where Napoleon’s legions fought the British to a standstill. In both cases, there were missed opportunities committed by the English, Prussians, and French, and Cornwell is willing to call out all those who blundered.

The author chronicles Napoleon’s return to France from his first exile on Elba and how, within a short period of time, the deposed emperor was able to rally the French people back to his side. His intention, once he returned to mainland Europe, was to defeat his enemies by fighting separate battles with the Prussians and the English.

He almost pulled it off, but was unable to, just as his commanders at Ligny and Quatre Bras were unable to deliver the decisive blow to their opponents. Even though Napoleon had the enemy on the run, he himself became his biggest obstacle to victory. While Cornwell’s battle sequences are compelling and dramatic, the undercurrent of the book is how Napoleon and Wellington managed the fight.

Wellington, for his part, seemed to be everywhere; he was an engaged commander who missed no detail of strategy or topography. He also connected with his men on a personal level and demonstrated his willingness to endure alongside them the privations and horrors of war.

Napoleon, on the other hand, was a study in contrasts. He remained aloof and distant from his troops, riding out the battle at a small country tavern, ironically called La Belle Alliance (“the good friend”). Not until the end of the fighting did he leave his position. He never reconnoitered his lines, apparently believing in his invincibility as a commander.

On the eve of the Battle of Waterloo, as the calamity of Napoleon’s return had begun to sink in and panic ensues in Belgium, Wellington and Field Marshal Blücher pledged to come to each other’s aide during the looming fight. The knowledge that they could trust each other’s word gave them the confidence to deploy their troops accordingly.

In the aftermath of the British victory, Wellington, as he surveyed the battlefield, was brought to tears. The night after the battle, he gave up his bed to a wounded comrade being attended by one of his army surgeons. The physician, John Hume, recounted that, as Wellington sat in a chair in the room, tears streaming down his face, he said, “Well, thank God I don’t know what it is to lose a battle, but certainly nothing can be more painful than to gain one with the loss of so many of one’s friends.’”

The only fault with this book is that the author shifts tenses from past into present — often within the same paragraph — which proves to be highly distracting. Still, having infused his story with well-written, fast-paced drama, Cornwell’s Waterloo is well worth a read. In this single volume, readers will consume a tale as it is best told: through the eyes of those who were there.

James A. Percoco is the teacher-in-residence for the Civil War Trust and the Journey Through Hallowed Ground Partnership, the author of Summers with Lincoln: Looking for the Man in the Monuments, and a member of the National Teachers Hall of Fame.

The Longest Afternoon: The 400 Men Who Decided the Battle of Waterloo

This tight, vivid account brings the reader into the heart of the epic conflict.