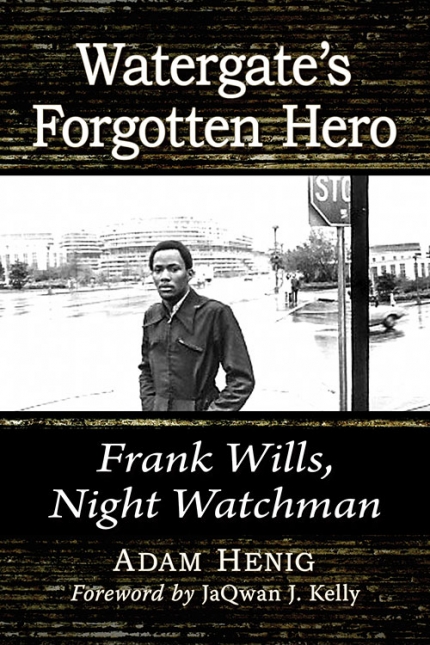 On June 17, 1972, a young Black security guard named Frank Wills was working the night shift in the Watergate Office Building in Washington, DC, when he discovered that several doors from the parking garage into the building had been taped open. Unbeknownst to him, his call to the DC Police — who would discover several “burglars” (in truth, operatives of the Nixon White House) sent to break into the Democratic National Headquarters — would change the course of American history.

Who was Frank Wills, and what became of him? Anyone going by the title of Adam Henig’s new book would assume that Wills — lauded on innumerable occasions as a hero who saved democracy — sank into history without a trace and with zero recompense for the role he played in bringing down a corrupt presidential administration, while several Watergate “villains” were rehabilitated as bestselling authors, media personalities, or, in the case of Richard Nixon himself, a senior statesman.

Except that Wills was hardly “forgotten.” For the remainder of his life, and particularly on major anniversaries of the Watergate break-in, he was given high-profile awards, lionized by major print and TV personalities, and offered numerous paying public appearances.

He played himself in the film “All the President’s Men” (the only person of color in the cast). Trust funds were established in his name, and the Jimmy Carter presidential campaign in 1976 took an active interest in furthering Wills’ education (if for self-serving purposes). Comedian turned political activist and diet guru Dick Gregory gave him a high-profile yet short-lived job. And famed Black author Alex Haley showed an interest in writing Wills’ life story.

When Wills died in 2000, every major U.S. newspaper, as well as a number of foreign ones, ran his obituary. And since then, he has been played by JaQwan J. Kelly (author of the foreword to this book) in Steven Spielberg’s “The Post” and was the subject of Kelly’s short film “He, the People.”

The real tragedy of Wills’ life is not that he was forgotten, but that he was ill-equipped to deal with the fame that was so precipitously thrust upon him. Wills was born in 1948 in the Jim Crow South to an unwed mother, enduring a childhood that, in his own words, was “a life in poverty and deprivation…each day a struggle for survival.”

Already at an educational disadvantage because of inferior segregated schools, he struggled academically before dropping out of high school. Although he comes across as a decent person — he enjoyed playing with his cats and building model airplanes — Wills had a fatal inability to stick with anything. This included education, jobs, and relationships (he fathered two children out of wedlock but never married).

The handling of his Watergate stardom was no exception. He tied his fate to a shyster agent who promised Wills easy money from interviews and appearances but who took advantage of Wills’ naivete and lack of education (at one point, Henig calculates that Wills would have earned more money if he had remained a security guard).

Meanwhile, Wills failed to follow through on potentially life-altering offers of assistance from the DC Urban League in getting his high school diploma and a U.S. congressman in obtaining good employment after he graduated. Even many of Wills’ well-wishers saw him as someone who had been afforded many opportunities but had not seized them.

Toward the end of his life, Wills returned to the Southern town he had come from, living with his mother, unemployed except for odd jobs and accused in two instances of shoplifting (spending a short time in prison for one). By the late 1990s, he was showing signs of a mental disorder, with frequent lapses in memory, “unhinged” speech and behavior, and bad headaches.

The cause, it turned out, was an inoperable brain tumor that had been growing for years. The tumor was a complication related to AIDS (it is not known when or how Wills — neither gay nor a drug user — contracted the disease), and there is a good chance that the types of medications given AIDS sufferers at the time had a profound impact on his mental capabilities.

Although Wills deserves to finally have his life story written down, the reader is not totally surprised that Alex Haley dropped the idea of writing his biography. In spite of extensive sourcing, this is thin material upon which to base an entire book. That this one was written is a feat that seems possible thanks to the inclusion of myriad details that cross the line from “context” to “padding” (e.g., pages devoted to a Jewish family who employed Wills’ mother when he was a child but who had no contact with him after that point).

Through no fault of the author’s, Watergate’s Forgotten Hero also suffers from the overshadowing of Wills’ story by recent events. After all, the interpretation of “hero” and “saving democracy” was bound to change drastically after the storming of the U.S. Capitol on January 6th.

How can the simple placing of a phone call, however significant, now stack up against the actions of the U.S. Capitol Police, who faced down a dangerous mob, paid with physical and mental trauma (or their lives), and well and truly “saved democracy” by protecting the certification of the Electoral College vote?

The Age of Entitlement: America Since the Sixties

Solid writing and research aside, this jeremiad about our changing national landscape reveals the author’s bitterness.