Watch Me: A Memoir 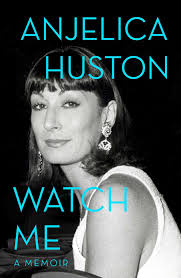 Anjelica Huston comes from royal cinematic lineage. Her grandfather and father, Walter and John Huston, were Academy Award winners and widely respected directors whose comprehensive oeuvres remain relevant. But, despite that paternalistic precedent of patina, it has not always been easy for the actress to further herself in film.

Huston’s second memoir, Watch Me, is a coming-into-adulthood-in-America story. After her mother’s 1969 death in an automobile accident, Huston relocated to New York with her lover, the photographer Bob Richardson. He had managed her months of modeling at British and Italian Vogue and, later, a plethora of portraiture with Richard Avedon, Eileen Ford, and Wilhelmina.

Four years later, Huston dissolved the mercurial relationship and relocated to Los Angeles. There, she reunited with her father, his wife, and “a handsome Rhodesian friend from my former life. He introduced me to his social circle, which included the comedy writer Kenny Solms and his collaborator, Gail Parent…Michael Douglas and Brenda Vaccaro…and Neil Diamond.”

By chance, she was invited to a party at the home of Jack Nicholson — an actor on the ascent in Hollywood bankability and charm, with tour-de-force performances in “Easy Rider,” “Carnal Knowledge,” and “Five Easy Pieces.”

Almost immediately, the two were publicized as the perfect couple, but their liaison was more potently problematic than it appeared: “In the overture to our relationship, Jack sent mixed messages. Alternatively, he would ask me to stick around or would not call when he said he would. At one point he told me he had decided we should cool it, and followed that up with a call suggesting we dine together. Sometimes he called me ‘Pal,’ which I hated. It implied a lack of romantic feeling. I didn’t want to be his crony but, rather, the love of his life.”

Nicholson’s career arc was large; he chose to be faithful to it, but not to Huston — or any other woman. She, by contrast, had ceded her haute-couture status and mutated into a groupie-like girlfriend. One night at a party in Los Angeles, the theater director Tony Richardson motioned Huston from across the room:

“‘Come here,’ he said, ‘you poor little thing.’ ‘What do you mean?’ I said, smiling defensively. ‘Poor little you,’ Tony continued. ‘So much talent and so little to show for it. You’re never going to do anything with your life.’ He had a singsong voice, like one of his own parrots, and he spoke with a slight lisp, but there was no mistaking the edge. ‘Perhaps you’re right,’ I answered. Inside I was thinking, ‘Watch Me.’”

Soon, she enrolled at Loft Studio, attended classes during the next two years, and was taught by Peggy Feury, the coach to actors Lily Tomlin, Sean Penn, Michelle Pfeiffer, Meg Tilly, Melissa Gilbert, Eric Stoltz, and others.

In the meantime, Lee Grant offered her a part in the film “Playing with Fire,” but the financing fell through, and it was never made. John Huston suggested Anjelica seek the services of his agent; she opted to be “in a different stable.”

He then contacted the almighty, pot-smoking Sue Mengers, who “represented just about every actor of consequence in the Hollywood firmament…[She] turned down Dad’s request on my behalf without a moment’s hesitation, replying that I was too similar to another actress she already represented, Ali MacGraw, who had starred in ‘Love Story.’”

Still, even without management, Huston had a coterie of friends who assisted with her occupation-in-formation. Penny Marshall invited her twice to appear on “Laverne and Shirley”; Rob Reiner gave her a part in his movie “This Is Spinal Tap”; the director Lyndon Chubbuck cast her in a short, “A Rose for Emily,” and John Foreman chose her for his MGM production, “The Ice Pirates.”

Afterward, Foreman gave her the novel Prizzi’s Honor. The unexpected opportunity to play Maerose, along with a perception that she had maneuvered the arrangement between her father, who was to direct, and Nicholson, who was to star, activated some agent-curiosity. Soon, Huston signed with a well-regarded firm. But when her representative attempted to negotiate higher than scale compensation, the production team balked:

“‘She has no talent. Her boyfriend is the star and her father is the director, that’s the only reason we are having this discussion.’ I vowed silently that when the movie came out, he would eat his words.”

Huston scored an Academy Award for her performance — and she was the third generation in her family to achieve it. Since then, she has co-starred with Woody Allen in “Crimes and Misdemeanors” and “Manhattan Murder Mystery”; re-created television’s Morticia Addams for “The Addams Family” and “Addams Family Values”; collaborated with the director Wes Anderson on “The Royal Tenenbaums” and “The Life Aquatic With Steve Zissou”; appeared in “Daddy Daycare” with Eddie Murphy; and corralled Oscar nominations both for “Enemies, A Love Story” and “The Grifters.”

Huston finally did marry a more compatible man: sculptor Robert Graham. This elegant and enchanting memoir concludes — but, one hopes, does not forever close — with his death, her recurring role in television’s “Smash,” and a visit to a medium: “Dad is happy in the afterlife because he likes alcohol and you can have a drink in heaven. She [the psychic] asked, ‘Who is the man with the goatee?’ I said it was [my husband] Bob. He said he tells me not to worry, that he is coming with me to the new house.”

A leading British classical tenor sets out to explore one of the most moving musical works of the 19th century.