Wampum: How Indian Tribes, the Mafia, and an Inattentive Congress Invented Indian Gaming and Created a $28 Billion Gambling Empire

This engaging and disturbing look at how big money changes everything reads like “Game of Thrones” in a business suit. 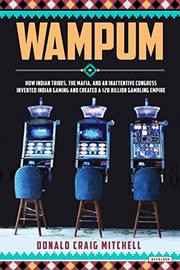 The title of this book neatly summarizes the issue that Donald Craig Mitchell examines in detail through good storytelling and an impressive grasp of U.S. legislative and legal processes. It is an illuminating case study of how — with persistence, money, and some well-placed government staff — one can manipulate our system.

Mitchell first shows how the doctrine of inherent tribal sovereignty, which is now accepted as legal precedent, came to be, though it is without a true legal basis, and how a host of determined actors — Indian tribal leaders, lawyers, and congressional and Bureau of Indian Affairs staff — were able to exempt sales of cigarettes on Indian reservations from taxes and then get officials to turn a blind eye to bingo games being played there.

The author then lays out how an expanded group of less savory actors — con men, the Mafia, lawyers, and businessmen — learned from the first legal battles to find ways to eventually permit full-scale gambling on reservations and make it exempt from federal and state oversight.

The economic situation on many Indian reservations was dire, and the economic-development argument was persuasive, despite the knowledge, laid out by the author, that the FBI and local law enforcement knew that bingo and other gambling operations set up on reservations were riven with mob influence, that money was being skimmed, and that much of it went into the pockets of con men or associated mobs.

The FBI and federal government’s “see no evil” approach over decades, described well, is astounding. Mitchell goes further by showcasing how several individuals have been able to create new tribes and reservations, with little historical justification or connection to Indian tribes, for the sole purpose of setting up gambling.

Mitchell does a terrific job of unveiling the issues in a “Can you believe it?” approach to storytelling, which is quite engaging. In fact, I found myself reading passages out loud to friends and asking questions like, “Can you believe quite a few mobs have been involved with gambling on Indian reservations?” And “Can you believe that after years of legal battles to keep casinos off of Indian reservations in California, the state ended up partnering with those casinos, when Arnold Schwarzenegger was governor, to earn revenue to make up for a budget deficit?”

Interviews with former mob members and other key characters, as well as details from a variety of sources, provide a number of fascinating accounts. In the stories presented, there are congressional staff and government bureaucrats that could be considered either heroes and heroines or villains. In fact, the author should consider writing a miniseries. It may not have the settings of “Game of Thrones,” but it would have a riveting cast of characters, surprising twists and turns, and numerous power plays.

At the same time, for the average reader, it is difficult to follow the many players; an index listing the “Who’s Who” would be welcome. Also, the detail on the many pieces of legislation slows the story down. This is not a book you want to keep putting down and picking up — it is better read in large chunks. For readers with more than a passing interest in how things get done in Congress and our overall policy-making process, the book is an excellent case study of how the best efforts of committed civil servants and elected officials can be undone when large sums of money are at stake.

Wampum shows how an effective use of the law, gaps in the law, manipulation of the legislative process, political influence, plus some strong-arming by mafia-types, built an entire industry that is pretty much untouchable in terms of regulations and taxation by federal authorities. There are lessons to be learned. The question one is left with is: When the industry becomes taxable and the U.S. Government shares in the take, then what?

Linda Nemec is a Washington DC-based consultant, analyst, and political observer. She is vice president of Navanti Group, a research and analysis company focused on countries in transition.